In our look back at ten memorable goals in Washington Capitals history, we go far back in history.  Back to the first night, in fact, and the first shift of a player who otherwise would not leave much of a mark in franchise history. 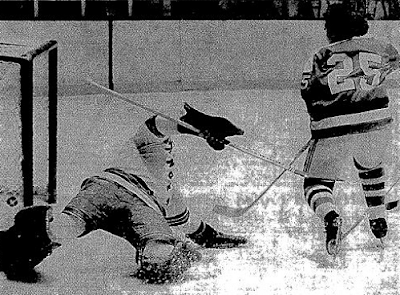 Every season brings new hope for a team and its fans.  That is especially true when the season is the first for a new franchise.  Sure, as an intellectual matter one does not harbor much expectation that the new club will do well, but there is that “finally, we are here” moment when all the anticipation, all the suspense, all the waiting is over, and the team can finally take the ice.

So it was on October 9, 1974 in New York City when the Washington Capitals took the ice for the first time, facing the New York Rangers at Madison Square Garden.  Reality would be put on hold, if only for a short time, thanks to one Jim Hryciuk.  The native of Rosthern, Saskatchewan, undrafted and playing in his first NHL game, hopped over the boards for his first NHL shift not five minutes into the contest.  By the time his shift was over, he would forever be a part of Capitals history.

Taking advantage of a turnover by the Rangers, Hrycuik led a two-on-one break against New York.  When defenseman Gilles Marotte chose to defend against the pass and cover Dave Kryskow, Hryciuk curled in and lifted a backhand past Ranger goalie Eddie Giacomin to give the Caps a 1-0 lead just over five minutes into the contest.

The lead did not last long; the Rangers tied the game less than a minute later.  The Caps stood fast, though, and struck back to take a 2-1 lead in the second period.  Then the Caps were reminded that hockey games are 60 minutes long, and fairy tale endings are usually reserved to fiction.  The Rangers tied the game, then took a 3-2 lead.  Washington scored on a goal by Kryskow in the second minute of the third period to tie the game, 3-3.  Sadly, that not only would be the Caps’ last goal of the contest, it would be their last shot of the game.  The Rangers out-shot the Caps, 19-1 in the third period and won, going away, by a 6-3 margin.

As for the Caps, reality was cruel.  The team won only eight games in an 80-game season, setting a record for futility (8-67-5) that stands to this day.  Maybe it was the white pants.  A total of 36 skaters appeared for the Caps in that inaugural season, combining for a total of 181 goals (lowest total in the league).  Only one of those goals could be first, though, and it belongs to Jim Hryciuk.  That is what makes it memorable.