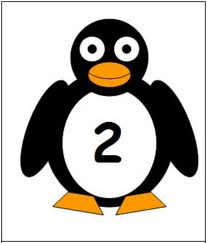 The Washington Capitals returned from an unsuccessful road trip to find the Pittsburgh Penguins dropping by Verizon Center on Wednesday night.  The Caps and the Penguins met for the first of four times this season, and the clubs were headed in opposite directions.  Washington ended its road trip with a 0-3-1 record to drop them to 4-3-2 for the season, while the Penguins shrugged off a cool start to take three of a possible four points out of their last two games to reach .500 at 3-3-2.

These are two teams with more than a little familiarity with one another and more than a little animosity toward one another.  Both were on display early as the Caps took advantage of the last change to match the Alzner/Carlson defensive pair against the Crosby-Kunitz-Dupuis line whenever possible.  And the big hitters for each team – Troy Brouwer for the Caps and Brooks Orpik for the Pens – were making life difficult for players caught unaware along the boards.

The Caps broke on top first when they took advantage of a napping Penguins defense.  Roman Hamrlik beat Penguin forward James Neal to a loose puck in the corner in the Caps’ end of the ice.  Hamrlik chipped the puck free up the boards to Jason Chimera, who turned and headed up the left side.  Chimera’s burst of speed caught Ben Lovejoy flatfooted, and the Caps forward sped by.  Matt Niskanen tried to take advantage of an attack angle to stall Chimera’s progress, but Chimera’s speed gave him a lane into the Penguin zone.  He curled around Niskanen and tried to snap a shot past goalie Marc-Andre Fleury, the Penguin goalie turning it aside.  But it was Mike Ribeiro knifing in from the right side who corralled the puck ahead of Evgeni Malkin, and Ribeiro snapped the puck past Fleury before the goalie could get across the crease, giving the Caps the 1-0 lead at 5:58.

The teams exchanged power plays later in the period, but neither club could convert its opportunities.  The Penguins led in shots at the first intermission, 10-8, but the Caps led on the scoreboard, 1-0.

The lead didn’t last long after the puck was dropped to start the second period.  Sidney Crosby broke clean on a breakaway when Mike Green caught a rut in the ice at the Penguin blue line.  Crosby wasted little time with dekes, snapping a low shot just over goalie Michal Neuvirth’s right pad to tie the game just 1:02 into the period.  Green was injured on the play, favoring his left leg as he went off.

The goal and Green’s injury seemed to leave the Caps a bit out of sorts for the next few minutes, and it cost them.  Matt Niskanen gave the Penguins a 2-1 lead when his shot hit John Erskine in front, the puck skittering past Neuvirth’s left pad.  Only 15 seconds later, Crosby potted his second of the game when he snapped the puck over Neuvirth’s left shoulder on the short side from the low edge of the right wnig faceoff circle.

With the Penguins hopping out to a 3-1 lead Caps head coach Adam Oates called his timeout to try to slow things down and blunt the Penguin momentum.  Perhaps surprisingly, he did not replace Neuvirth to accomplish that aim.  He was rewarded for his discretion as Neuvirth settled the rest of the Caps down with a couple of key saves on Neal on a Pittsburgh power play just after their third goal when the Penguins could have blown the game open.

Neal would get a measure of revenge when he wristed a shot past Neuvirth with just 37 seconds left in the second period to give the Penguins a 4-1 lead at the second intermission.

The third period lacked for spark as the Penguins came out looking only to play sound defense in front of Fleury and letting the Caps shoot from long range.  This might have been how the final 20 minutes played out, but with less than seven minutes left Derek Engelland got tangled up with Jason Chimera in front of the Caps’ bench.  As they separated Engelland gave Chimera a face wash and was whistled for a roughing minor penalty at 12:16.

On the ensuing faceoff Nicklas Backstrom won the draw cleanly from Brandon Sutter back to John Carlson.  The Caps defenseman sent the puck wide to Alex Ovechkin in the left wing circle, and Ovechkin one timed the puck high over Fleury’s blocker to bring the Caps within two at 12:23 of the period.

The Caps got within one just over two minutes later when Brooks Laich won a battle for the puck with Sidney Crosby behind the Penguin net, sweeping it out to Joel Ward who stuffed the puck under Fleury’s pads before the goalie could find him lurking in front.

The goal was the first shot in a furious effort by the Caps in the last 5 minutes to draw even.  Fleury turned several fine chances aside, and the Caps pulled Neuvirth for an extra attacker with just over a minute to play in regulation.  With the clock winding down toward zero, Tyler Kennedy tried to rim the puck around the boards behind the Penguin net to relieve pressure.  Mike Ribeiro cut off the puck along the right wing boards and whipped it to the net.  Fleury kicked out the puck, but he was unable to steer the rebound to a teammate.  Ovechkin reached for the puck and snapped it back at Fleury, but the goalie managed to get a pad on it.  He could not cover it, though, and it make for a mad scramble at the top of his crease.  Fleury tried to lunge forward to glove the puck to the ice, but Troy Brouwer poked at the puck as Fleury’s glove was coming down over it.  Brouwer got to it an instant before Fleury’s glove and slid it through the goalie and in with 1.7 seconds left to tie the game at four.

The Penguins argued that play should have been stopped, to no avail, and that is how regulation ended.  Overtime started with both teams seeming to want an early end to the extra session, the Penguins starting with Crosby and Malkin as their forwards, the Caps countering with Ovechkin and Nicklas Backstrom.  Crosby won the draw to start overtime, but Paul Martin’s attempt to find Malkin on a long pass was too long, and Karl Alzner was there to control the puck at the Caps’ blue line.  Alzner sent the puck across to Backstrom, who eased across the Penguin blue line on the right side.  As Martin closed on Backstrom, the Caps center slid the puck to Ovechkin entering the zone on the left side.  Kris Letang eased over in an effort to get Ovechkin to change direction, but rather than cutting inside the defenseman, Ovechkin fired a wrist shot past Letang.  The shot sailed over Fleury’s glove on the long side and just under the crossbar to complete the comeback, giving the Caps a 5-4 overtime win an bringing their four-game winless streak to a halt.

Notes: The power play goal at 12:23 of the third period broke an 0-for-18 streak of futility for the Caps… Mike Green is listed as day-to-day with a lower body injury… Matt Hendricks went off in the third period after blocking a shot but is not expected to miss time. 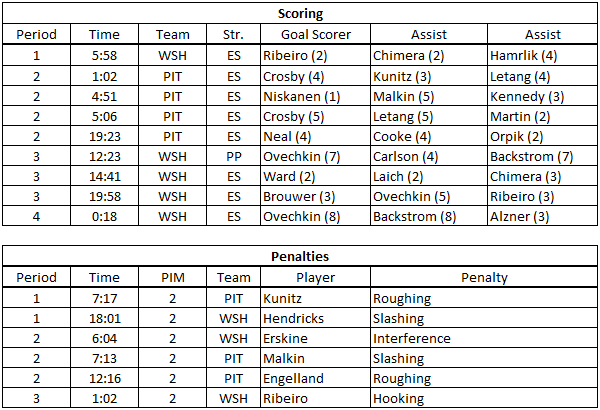 Posted by The Peerless at 8:07 PM No comments: