The Peerless Prognosticator is ON THE AIR!!! -- Game 44: Capitals at Predators, January 16th

Nashville is not quite as hot as the Caps at the moment, but they are not far off that pace. The Predators will face the Caps holding a six-game winning streak on home ice.  Overall they have won four in a row and have points in nine straight games (7-0-2).

If there is a theme in the Nashville 7-0-2 run over their last nine games, it is “everyone in the pool!”  The Predators have 15 different players sharing in the 35 goals scored, and they have a whopping 21 skaters recording points.  Even goalie Pekka Rinne got involved in the scoring with an assist in Nashville’s 5-4 Gimmick loss to the Chicago Blackhawks on December 29th.

What is amazing about Wilson’s production is that he is doing it from the second line.  The top line of Mike Ribeiro, Filip Forsberg, and Craig Smith has been even more productive.  The trio has combined for 37 of the Predators’ 126 goals scored, almost 30 percent of the total.  In the 7-0-2 run, though, the goals have been a bit less frequent.  Smith has three, and Forsberg has two.  Ribeiro has not lit the lamp, but he does have ten assists in those nine games.

Forsberg, as every Caps fan knows, was a Washington draft pick.  OK, the trade that sent him to Nashville for Martin Erat and Michael Latta didn’t go quite as planned.  Move on.  Forsberg is in his first full season, and while he is a rookie, he is displaying a consistency that one would expect of a veteran.  He has not had more than two straight games without a point since he had a three-game streak (his only one) back in late November.  He has a six-game goal streak to his credit this season, and he leads all rookies in goals (15, tied with Ottawa’s Mike Hoffman) and points (39, seven more than Calgary’s Johnny Gaudreau).  He has been a fixture on Nashville’s power play to the point where his 11 power play points is comfortably ahead of all other rookies (Gaudreau has eight power play points).

On defense, Nashville has five defensemen in double-digits in points.  Two – Shea Weber and Roman Josi – are pushing up against 30 points (Weber: 29; Josi: 27).  Weber, a perennial in terms of Norris Trophy discussion, is well known to hockey fans.  Josi is perhaps less well known.  Last season, Josi came into his own.  His 40 points in 72 games more than doubled his point total combined over his first two seasons (34 in 120 games).  This season, he might do even better.  With a a scoring line of 7-20-27 in 42 games, he is on a pace to finish 14-39-53. 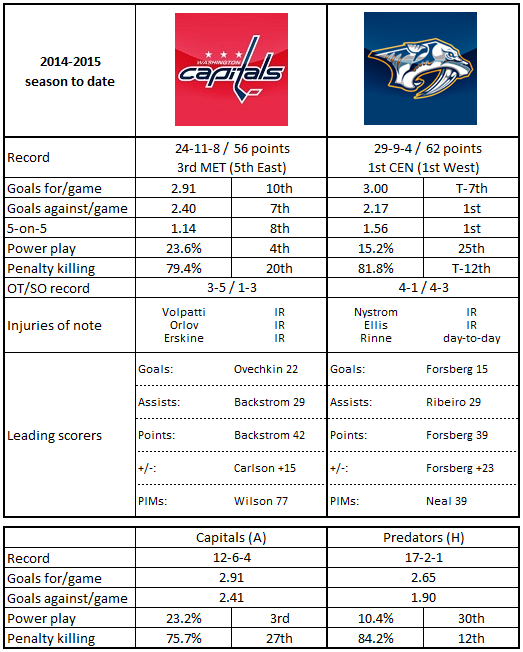 1.  Mike Ribeiro does not have a goal in his last dozen games.  He does, however, have a dozen assists in those dozen games.  It has allowed him to climb into a tie for seventh overall in assists (29, tied with Tyler Johnson and Nicklas Backstrom).

3.  What is odd about the first period goal differential is that the Predators have so few instances of carrying a lead into the first intermission.  They have done so only 14 times in 42 games; 12 teams have done it more often.

1.  This will be the first time that the Caps have played outside the Eastern time zone since November 20th, when they beat the Colorado Avalanche in Denver, 3-2.

2.  The Caps have not lost to a Western Conference team on the road since November 15th, when they lost at St. Louis, 4-1.  That loss is the Caps’ only one to a Central Division team so far this season (4-1-0).

4.  The Caps (which you can read as meaning “Braden Holtby”) have allowed two or fewer goals in six of seven games to start the new year.

Pekka Rinne suffered a sprained knee in the third period of Nashville’s 5-1 win over Vancouver on Tuesday and is expected to be out 3-5 weeks.  That means that the goaltending duties fall to Carter Hutton.  It is worth noting that Rinne has all 29 Nashville wins this season.  Hutton has appeared in six games without earning a win (0-3-2, one no-decision).  His goals against average is substantially worse than Rinne’s (2.60 to 1.96), and his save percentage is similarly below that of Rinne (.905 to .931).  This should surprise no one, since Rinne is an annual focus of Vezina Trophy discussion at this point of his career (when he is healthy).  Hutton’s 2014-2015 numbers are, however, consistent with his career numbers (20-15-6, 2.63, .909, one shutout).  Nashville has enough offense so that Hutton need only limit mistakes; he does not need to be Rinne-like in his performance for Nashville to maintain its lofty status in the West.  He has one career appearance against the Caps, a 4-3 win last March 30th in which he stopped 23 of 26 shots.

With the Caps facing a backup goaltender thrust into a starting role, one of the things the team might want to attend to is get in his line of sight and crowd the crease.  It would be nice if Brooks Laich could fill that role.  Well, it would apply to Troy Brouwer, Joel Ward, Jason Chimera, or Eric Fehr, too.  It would be particularly good to get Laich going, though.  He had the game-winning goal in the Caps’ 6-2 win over Toronto on January 7th, his second goal in consecutive games at the time.  Those, however, are his only two goals in his last 16 games, and he is on a pace to finish the season with 12 goals.  Against a team like Nashville, which possesses considerable depth on offense, getting secondary scoring from Laich (or Brouwer, or Ward, or…you get the point) could be the key to success.  Laich is 1-2-3, minus-1, in eight career games against Nashville.

This will be a measuring stick game, even if Nashville is without Pekka Rinne in goal.  The Predators have the league’s best home record (17-2-1) and have not lost at home since dropping a 3-1 decision to Chicago on December 6th.  Since then, Nashville is 6-0-0 on home ice and has outscored opponents by a 20-10 margin.

The Caps have had some odd, well…luck of a sort recently.  Against Florida, starting goalie Roberto Luongo was injured, and the Caps won.  They beat Detroit when starting goalie Jimmy Howard went down to injury.  They beat the Flyers’ number three goalie on Wednesday.  Now, they get Nashville without Pekka Rinne available for duty.  No one wishes that kind of misfortune to hit any team, even opponents, but these are games to be won, no matter what the circumstances.

Capitals 3 – Predators 2
Posted by The Peerless at 9:33 PM No comments:

You can read the recap we penned for Japers’ Rink here, but we had a few more thoughts on last night’s 1-0 Washington Capitals win over the Philadelphia Flyers.

-- Give Flyer goalie Rob Zepp credit for playing a very good, under-control game in what could have been a difficult setting, on the road against a very hot team.  But the Caps shot in some bad luck, too.  Alex Ovechkin hits a crossbar, and the puck stays out.  Jay Beagle beats Zepp cleanly over his left shoulder from point blank range, but there is too much air under the puck, and it sails into the netting.  Eric Fehr has an insurance goal on his stick, but he is unable to lift the puck over Zepp’s left pad.  Zepp was good, but the hockey gods were smiling on him, too.

-- Streaks are funny things.  When a club is going badly, you can tell when they are coming out of it.  They play better, but they are not immediately rewarded.  It might take a couple of games to turn “playing better” into wins.  The same goes for hot streaks.  A team shows cracks, gets lackadaisical, takes short cuts, but it might take a game or two before they are burned by the deterioration in play.  That was what the Caps had the look of last night, especially after the first eight minutes.  Give them credit for playing a disciplined game in many respects, making the Flyers negotiate the entire ice surface to mount any offensive push.  But their offense looked disinterested in spots, disjointed in others.

-- Andre Burakovsky is going to be a fine player, and one can see him improving almost on a game-to-game basis in terms of being comfortable on the ice and not playing outside his skill and comfort zone.  But the fact is that the right wing slot on the top line has been a revolving door for much of the season.  It might be that the solution, at least for this year, is going to be found at the trading deadline.  The first big in-season move in the tenure of Brian MacLellan, perhaps.

-- For all the nonsense being tossed Brooks Orpik’s way this season – he’s too old, his contract is too big, he’s slow – his nine points this season (all assists) is not far off his mark last season (2-11-13), and he is a plus-8.  Add in that he is averaging almost three minutes of penalty killing time a night and more than 22 minutes overall, and he seems entirely worthy of the trust the coaching staff seems to have in him.

-- It is hard to notice Jack Hillen on a game to game, or even a shift to shift basis.  He does not get a lot of ice time, but there he is these days, playing the solid pro, hardly a liability as the Caps work through some injury issues on the third defensive pair. Since December 20th he is 0-4-4, plus-2, in ten games.

-- The Flyers are a mess on the back end.  Some of that is injury (Braydon Coburn and Niklas Grossman out on the blue line, as was goaltender Steve Mason).  But the defense the Flyers iced last night looked rather weak in their own end, a lot of the same kind of defenseman – puck movers who were not particularly strong along the wall in one-on-one battles.  It made the Caps offensive performance a bit more disappointing.  A lot of hard work along the walls was not rewarded.

-- Matt Niskanen was our “player to ponder” in the prognosto for this game, the focus of which was his disappointing offense compared to last season’s breakout year in Pittsburgh, but entirely consistent with his career performance otherwise.  What he showed last night was a different side to his game, a certain orneriness, first with his hit that leveled Scott Laughton and sent the Flyer to the locker room for the duration, then not letting the Flyer chirping about it get him off his game.

-- Is it me, or have the Brothers Schenn regressed?  We had no idea what they were doing for considerable stretches last night, except for trying to get Tom Wilson to do something stupid.  Good on Wilson for not indulging them.

The Caps are going to move up in weight class this weekend with back-to-back games in Nashville and Dallas.  While there is much to cheer about in a 1-0 win over a hated rival, the Caps will have to be more consistent in their effort against those teams if they are to come out of the weekend with any standings points.