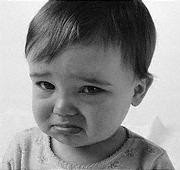 But losing last night to the Montreal Canadiens in overtime, 3-2, was a punch right in the kisser. It was an odd game in many respects. If you look at the game statistics without knowing the score, you might guess that the Caps won this game by perhaps 4-1 or 5-2. They out-shot the Canadiens (47-38), out-hit them (37-24), blocked more shots (30-27), and owned the faceoff circle (45-26). How, then, did they lose? Or more to the point, how did they not run the Habs out of the rink?

Well, in the first period they almost did just that. In the first ten minutes they almost forechecked the Canadiens out onto Sixth Street, creating turnovers in the Montreal end and generally causing havoc with the Canadiens’ rhythm. But after outshooting Montreal 19-7 in the period and coming out only with a 1-1 tie at the first intermission, the rest of the game was like watching a balloon slowly deflate.

Montreal turned the tables in the second period, dominating play for what seemed minutes at a time, and their ability to make Washington work hard on defense against trios of cycling forwards appeared to take the legs out of the Caps. The Caps did comeback to get the better of play in the third period, but their inability to either put the Canadiens away after taking a lead, or holding onto that lead left the game to the fates of the hockey gods. And the gods smiled on the visitors in the 14th minute of overtime when Tomas Plekanec skated into the Caps’ zone, waited for Joe Corvo to back off, then rifled a wrist shot past goalie Jose Theodore to turn Verizon Center silent but for the whoops of joy from the Canadiens on the ice.

-- No shots, no points. The best part of that is that it can’t get worse for Alex Ovechkin, who did not have a good game. By appearances, his night was one of wasted energy. A lot of churning, but to no particular purpose. He just looked very disorganized and not very focused last evening.

-- In fact, it was Ovechkin who might have been the key in the tying goal in the third period for Montreal. Scott Gomez took the puck behind his own net and started out of the zone with a head of steam. Ovechkin had Gomez lined up for a hit at the red line… 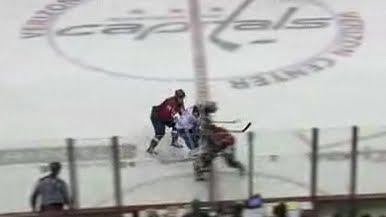 … Ovechkin only got air as Gomez continued on, drawing the other four Caps to him like moths to a flame and leaving Brian Gionta open on the right wing… 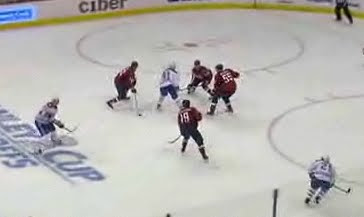 …those same Caps turned to Gionta, leaving Gomez a path to the net, where he tapped in a crossing feed before Mike Green could recover… 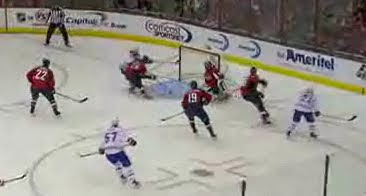 -- Tomas Fleischmann has a fairly broad repertoire of offensive talents. But it doesn’t appear that those gifts are translating into being a center at this level. He simply does not look sturdy enough in that role. Too often he was pushed off the play or manhandled in the faceoff circle (despite splitting his ten draws).

-- Montreal looked almost as if they were playing an odd variation of a box-and-one. Keep a spy on Ovechkin, use the other four players to clog the middle. The Caps certainly got pushed to the left side of the ice, where shots came from inside where Ovechkin spent a lot of his time – pushed out to the blue line by whichever Canadien defender was marking him… 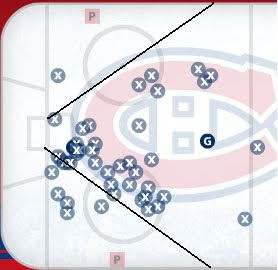 -- If you had Eric Fehr and Mike Knuble leading the Caps in shots, you win the gold star. Bet those two would have been pretty low on the list of top shooters you would have picked before the game.

-- There is a bright spot for the Caps, as long as they persist… the majority of the 37 hits were not cheap. Frequently and persistently the Caps pounded and shrugged off Canadiens as if they were brushing lint off a suit jacket. And it came from a lot of unexpected places – Boyd Gordon had four hits, Nicklas Backstrom had four (and played with a not-often seen edge to his game), David Steckel had six, Mike Green had four and hardly looked like the deer-in-headlights that he became as the playoffs ground on last year. That kind of “tenderizing” is the kind of thing that can have a cumulative effect over a seven-game series. But they can’t let up.

-- Speaking of Green, eight blocked shots. Only Montreal’s Hal Gill had more (nine), and he’s supposed to be doing that.

-- Eric Belanger was 18-for-21 in the circle and was not on the ice for any of the three Montreal goals. Joe Corvo wrong-footed a floater past goalie Jaroslav Halak for a goal. Last night, George McPhee looked like a genius for getting these guys at the trading deadline.

-- John Carlson had a good game for this being his first NHL playoff game. But five giveaways and not pulling the trigger on a two-on-one late. Still a work in progress.

-- Sometimes it’s better to be lucky than good. Jaroslav Halak was more often the former than the latter last night. He fought the puck a lot early, but the Caps could not get sticks on loose pucks. Even better chances they had were being shot wide. For goalies to “steal” a game, generally they have to make a few acrobatic saves or rob someone in a critical situation, in addition to making the saves he is supposed to make. We do not remember any particularly hard saves that he had to make. He was solid, but not spectacular.

-- Going 18-for-24 on faceoffs in the defensive zone takes a lot of heat off a goaltender. But it makes one wonder how it is that the Canadiens still got 38 shots on goal in the 74 minutes of play, including 31 in the last two periods and change.

-- We thought that giving Montreal chances on the power play would be a bigger factor than the Canadiens’ conversion rate. And there it was in the first period, taking a second penalty a few minutes after killing off one that gave the visitors that sliver of an opening that they used to their advantage.

-- There is an inconvenient truth about the Caps that they and their fans had better wake up to. Despite going 80-22-12 in almost three regular seasons at home under Bruce Boudreau, the Caps are now 6-7 in the 13 home playoff games they have played over the last three seasons. They have been outscored 35-33 in those games (that’s a 2.54 goals-per-game scoring average). Their power play is running at 17.6 percent, while their penalty killing is 76.5 percent. In short, they have been a bad home team in the playoffs. There is no other way to sugar-coat that, and it has to stop.

On Saturday.
Posted by The Peerless at 7:02 AM 7 comments: