On June 30th the National Hockey League held its 51st entry draft.  For many young hockey players it is a rite of passage from amateur status to taking the first step to an NHL career.  For the clubs drafting these youngsters it is a signal of hope and expectation, that one of these youngsters taken might lift the Stanley Cup over his head in celebration in a season yet to come.

For the Washington Capitals, who participated in their 34th NHL Entry Draft at the end of June, it was another statement that this is the key tool they use to build their club.  It is a goal that, in their words, “always has been to draft, develop and retain our own players.”


Fair enough.  Growing your own rather than assembling parts from trades, free agency, or waivers is, on its face, a sound strategy.  A team can build the team it wants to fit the philosophy it employs, and it can do so cheaply, given the contours of the collective bargaining agreement with respect to entry-level contracts and restricted free agency.  If a club can get contributions from young players on such early-career contracts, it is the sort of efficiency that can allow that club to fill in its holes by other means – trades, free agents, or waivers.

We will take some time to look at those questions in the context of ten years of drafting history – from 2001 through 2010.  We do not include either the 2011 or 2012 drafts owing to the lead time it takes for all but the most elite draftees to climb the development ladder and reach the NHL.

Over the days to come we will look at the 89 draft picks of the Washington Capitals over that ten-year period and the 2,448 selections league-wide over that period.  To do that, let us start at the top with a demographic profile.  What does this collection of 89 draft picks for the Caps look like?

Over the 2001-2010 period the Caps had the benefit of a lot of first round picks.  In fact, even though the Caps ranked tied for seventh in total draft picks over the 2001-2010 period, their 16 total first round draft picks was the most of any team in the league.  Compare that to the four that the Detroit Red Wings had over the same span of time.  As one might expect with such a preponderance of first round picks, the Caps did not have as much to pick from in the second and third rounds – rounds where teams might find contributors, if not stars.  The Caps ranked tied for 10th in total second-round picks and tied for 20th in total third-round picks over that ten-year period.  After that, the Caps rank in the middle-of-the-pack as far as picks by round are concerned.  Here is how the picks break down by round over the ten years: 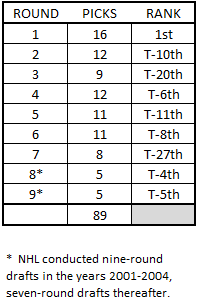 By position, the Caps drafted 17 centers, 35 wingers, 27 defensemen, and 10 goalies.  Here is how those picks by position broke down by round taken: 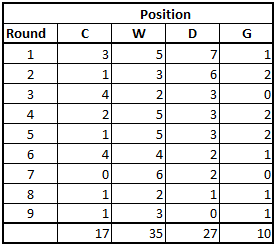 Defenseman has been the featured position in early rounds with 13 blueliners picked among the 28 first and second round picks over the 2001-2010 period.  What might look surprising among the 28 picks is that the Capitals selected barely as many centers (four) as goaltenders (three).  Centers were more often the pick in middle rounds, comprising 11 of the 43 players selected from the third through the sixth rounds, although even here the total picks at that position trailed the number of wingers picked and was only as many as those taken on defense.

Where the Caps spent most of their energy in drafts over the 2001-2010 period was in drafting wingers or generic “forwards,” of which they selected 35 among their 89 picks.  By round the Caps selected more wingers than centers in all rounds in the aggregate except among third-round picks, four centers selected in that round over the ten-year period compared to two wingers.

So as we move forward looking at this ten-year period of the NHL Entry Draft, this is where we start.  The Washington Capitals’ 89 draft picks overall rank tied for seventh among the 30 NHL teams over that period.  They have more first round picks overall than any other NHL team, and those picks focused more on wingers and defensemen (12) than on centers and goaltenders (four).  Wingers and defensemen have been the focus overall, with 62 of the 89 draft picks in the ten-year span devoted to those positions, 27 to centers (17) and goaltenders (10).

How have they done?  Well, that is what we will take a look at in the days ahead.