The Peerless Prognosticator is ON THE AIR!!! -- Game 11: Capitals at Rangers, February 4

The points streak is over, and it is time for the Washington Capitals to deal for the first time this season with a regulation loss.  They get to rectify that situation, stop the losing streak at “one,” and start a new streak on Thursday, when they head to Manhattan to face the New York Rangers, a team trying to regain a competitive level of performance after three straight seasons failing to reach the Stanley Cup tournament (they lost in the qualifying round last season).

That the Rangers are struggling in the early going (3-4-2) is not due to the play of Artemi Panarin.  After finishing third in last year’s Hart Trophy voting and earning a berth as the first team left wing on the league’s All-Star Team, Panarin is picking up where he left off with 12 points in nine games, tied for eighth in the league, and with points in seven of his last eight contests.  Panarin got a bit of a late start in the NHL, entering the league with the Chicago Blackhawks in 2015-2016 just before his 24th birthday.  But he has made up for lost time with steady improvement.  His point totals have improved in each of the last four seasons, from 74 with the Blackhawks in 2016-2017 to 95 points with the Rangers last season.  Panarin seemed to be getting warmed up in his goal scoring, too.  After posting two goals on 15 shots (2.5 shots per game/13.3 percent) in his first six games, he has goals in each of his last three games on ten shots (3.33 shots per game, 30.0 percent).  He has a five-game points streak against the Caps (5-3-8) dating back to his time spent with the Columbus Blue Jackets, and the 20:43 per game I ice time he averages against the Caps over his career is the highest he has against any opponent.  Panarin is 8-7-15, plus-5, in 15 career games against the Washington.

The Rangers have not had a lot of scoring from their defense, but almost half of the 16 points recorded by the blueliners have come from Adam Fox (1-5-6).  At the ripe old age of 22, the Rangers are Fox’s third NHL organization.  Drafted in the third round of the 2016 Entry Draft by the Calgary Flames (66th overall), Fox never dressed for the Flames before he was traded to the Carolina Hurricanes in June 2018 with Dougie Hamilton and Micheal Ferland for Noah Hanafin and Elias Lindholm.  He never played for the Hurricanes, either, traded to the Rangers in April 2019 for a 2019 second round draft pick and a 2020 third round draft pick.  Fox broke into the NHL last season with the Rangers in a big way.  He finished tied with Quinn Hughes for second among rookie defensemen in goals (eight) and finished third in points (42).  His plus-22 rating was tops among rookie defensemen.  His performance was good enough for a fourth-place finish in Calder Trophy voting for rookie of the year.  He opened this season with a flash, going 1-4-5, plus-1, over his first five games, but he has just a single assist in his last four contests.  Fox is 0-2-2, plus-2, in three career games against the Caps.

Not so long ago, it seemed Finland was the place to go for goaltenders in the NHL.  These days, it might be Russia.  Four goaltenders by birth and another four by place of origin (according to NHL.com) hail from Russia.  Among the youngest and perhaps most promising of the group is the Rangers’ Igor Shesterkin.  It is not as if Shesterkin came into the league as a heralded amateur, at least by the standards of his draft cohort.  He was the 14th of 21 goalies taken in the 2014 Entry Draft (the Caps’ Vitek Vanecek was the fourth goalie selected).  But after his selection by the Rangers, Shesterkin was almost impenetrable with the St. Petersburg SKA club in the KHL, going 76-14-10, 1.57, .938, with 26 shutouts over four seasons through 2018-2019.  Splitting time between Hartford in the AHL and the Rangers last season, Shesterkin went 10-2-0, 2.52, .932 in 12 games with the Blueshirts.  His start this season has not been quite as impressive – 2-2-1, 2.41, .906 – but he appears to be the clear heir to the chair Henrik Lundqvist occupied for 15 seasons as number one goaltender. Shesterkin has never faced the Caps. 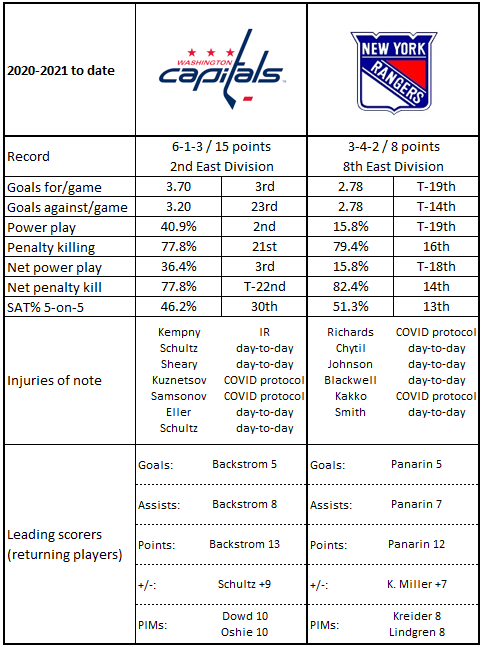 5.  In five home games so far, the Rangers scored first only once, that in a 5-0 shutout of the New York Islanders on January 16th.

3.  The Caps’ shots differential of minus-5.9 shots per game ranks 30th in the league, ahead of only Philadelphia (minus-10.1).

Alexis Lafreniere is the prize of the 2021 draft and the odds-on favorite to win the Calder Trophy as top rookie in the 2020-2021 season. But defenseman K’Andre Miller, one of three rookies to skate for the Rangers this season (Julien Gauthier is the other), has as many goals as Lafreniere (one) and leads the rookies in points (four).  Those four points are tied for second among the league’s rookie defensemen (Ty Smith: eight), and his plus-7 rating is tops in that group.

Miller was taken 22nd overall by the Rangers in the 2018 Entry Draft and spent two years with the University of Wisconsin before making the jump to the Rangers this season.  Miller was eased into the lineup to start the season, averaging 14 minutes and change in his first three games without recording a point.  Since then, his ice time has increased (20:36 per game), and he is 1-3-4 in those games.  It would be worth noting here that were Miller to continue gobbling up minutes at a 20:36 per game pace, he would finish the season with more average ice time for a rookie Rangers defenseman, but one, since the league started capturing this statistic in 1997-1998 (Neal Pionk averaged 22:36 in 2017-2018). This will be Miller’s first career appearance against the Caps.

Through ten games this season, John Carlson is 4-7-11, not as gaudy as his 3-15-18 start through ten games last season, but his four goals are second among the league’s defensemen, and his 11 points are fourth in the league.  He opened the season with a two-point (goal, assist) game in a win over the Buffalo Sabres, and after going without a point in two games posted points in each of his last seven games (3-6-9).  He is also one of four defensemen in the league this season with a Gimmick goal and one of two whose goal was a game-winner (Kris Letang is the other).

Carlson is the only defenseman in the league who, over the last three-plus seasons starting in 2017-2018, has more than 200 points in the regular season (224, 25 more than Brent Burns).  His 47 goals rank third on that list, while his 12 game-winning goals rank first, as do his 96 power play points.  He has been consistent over that time frame as well, posting at least one point in 149 of 241 games played (most point-games in the league) and at last two points in 62 games, also most in the league, ten more than Burns.  It would be hard to argue against Carlson being the best offensive defenseman in the game.  He is 5-23-28, minus-1, in 36 career games against the Rangers.

If you are looking at this three-game week on the schedule, this game looks like the eye of the storm, the Caps having just wrapped up with the Boston Bruins and with a date with the Philadelphia Flyers this weekend.  But that’s the danger.  The Rangers have a fair amount of skill, it just happens to be in a relatively undeveloped state.  Artemi Panarin is always dangerous, as is Mika Zibanejad.  Chris Kreider is a cagey veteran.  But with younger players like Alexis Lafreniere, K’Andre Miller, Adam Fox, Pavel Buchnevich, and Kaapo Kakko (listed as injured), with Igor Shesterkin in goal, the Rangers have what could be, but is not yet, a formidable core.  Caps fans hope their development is delayed a bit longer.