Thirteen franchises have won a Presidents' Trophy in the NHL before this season.  With the San Jose Sharks losing to the Colorado Avalanche in overtime tonight, 5-4, the Washington Capitals become the 14th franchise to win the Trophy.

Congratulations to the players, coaches, staff, and managers of the Capitals organization.  It is a trophy well-earned.
Posted by The Peerless at 10:51 PM No comments:

A Face Made for Hockey

Anton Gustafsson dressed tonight for the Hershey Bears in his AHL debut.  We must say, his official picture at the AHL web site makes no mistake -- this is a hockey player... 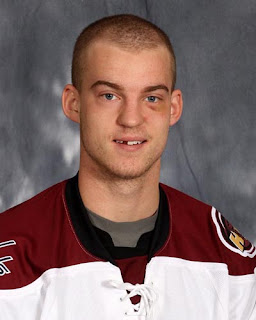 Gus just registered his first pro point in tonight's game between the Bears and the Syracuse Crunch oops, make that the Norfolk Admirals (an assist on a goal by fellow rookie Cody Eakin).  Congratulations, Gus... hope it's the first of many.
Posted by The Peerless at 7:18 PM 2 comments:

We are a month removed from the trading deadline, a day on which (according to TSN.ca) there were 31 trades involving 55 players and 35 draft picks. Teams move assets around in hopes of finding a spark, of finding the right mix for the home stretch, of finding that last piece of the puzzle. Other teams do so looking to the future – collecting draft picks or prospects in hopes that a year or two from now they will again be competitive, that they will be a contender.

The Washington Capitals made four trades on that day…

1. They acquired defenseman Joe Corvo from the Carolina Hurricanes for defenseman Brian Pothier, prospect forward Oskar Osala, and a second round draft pick in 2011.

2. They re-acquired defenseman Milan Jurcina from Columbus for a sixth round draft pick in 2010.

3. They acquired forward Eric Belanger from Minnesota for a second round draft pick in 2010.

4. They acquired Scott Walker from Carolina for a seventh round draft pick in 2010.

None of these deals could be considered a “blockbuster,” but they were subtle changes that might be considered part of a larger piece. And we cannot help thinking that what moves the Caps made this year, and especially at the trading deadline, along with deals made last summer were with one game in mind.

Rewind back to last spring. The Caps had worked their way through a tough seven-game series with the New York Rangers. Then, they battled the Pittsburgh Penguins through the ups and downs (and the overtimes) of six games, split evenly between the teams. And that brought the teams to Game 7. We will not revisit that game in its result, but rather in its lineup. The lineup for the Caps.

The Caps could still boast Alex Ovechkin, Nicklas Backstrom, Mike Green, and Alexander Semin in the lineup for Game 7 of that series, but that is not where the series was being fought or decided. Through six games of that series, the top line for the Caps (Nicklas Backstrom, Alex Ovechkin, and Viktor Kozlov) had the advantage over the top line of the Penguins (Sidney Crosby, Chris Kunitz, and Bill Guerin) to a virtual standstill, 10-13-23, plus-10 to 8-12-20, plus-6.

Game 7, though, was another matter. In the 6-2 series-deciding game, the Penguins did get a superior performance from its top line, outdueling the Caps, 3-2-5, plus 3 to 1-0-1, minus-1. But the Penguins also got contributions from the lower tiers of the forward lines, the other three lines going 2-5-7, plus-3 in that final game to the Caps’ comparable lines going 1-1-2, minus-5.

On defense, it was a bit of a reversal among the top pairs. Through six games the Caps’ top pair (Mike Green, Shaone Morrisonn) went 0-5-5, plus-minus-4. The Penguins’ top pair of Brooks Orpik and Sergei Gonchar (except for a brief spell by Kris Letang when Gonchar was injured, which is accounted for here) had an advantage, going 2-6-8, plus 1.

On the second and third pairs, though, the Penguins had a clear and distinct advantage in the series’ first six games, going 3-6-9, minus-4 to the Caps’ 1-3-4, plus-6.

What Game 7 brought into clear relief was a stunning lack of depth for the Caps, in performance, certainly, but also perhaps with respect to skill. One could see how the Caps might not have been ready for prime time, given the performance down the lineup compared to that of Pittsburgh. It is this that Caps – a team that eschewed both the big free agent signing last summer and the splashy trade at this year’s deadline – appear to have addressed in their personnel moves since that disastrous Game 7. Compare the lineups of that Game 7 last spring against the Penguins against what might be a playoff lineup for the Caps… 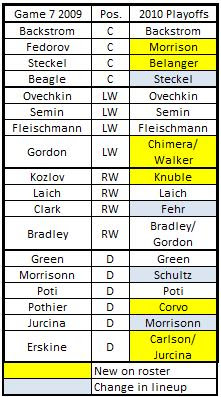 At center the Caps replaced Sergei Fedorov (no goals, four assists in the Penguin series last spring) with Brendan Morrison, signed last summer as a free agent. Eric Belanger was obtained in trade last month to bolster the middle. Hopefully, what this does is keep the Caps from having to dress Jay Beagle (not a bad player, but not likely a player who will anchor any of the forward lines on a contender at this point in his career). It provides for playing David Steckel in a more suitable 12 minutes a game than the 16 he was getting in last spring’s playoffs.

At left wing the Caps have more options on the lower half of the forward lines. Jason Chimera (obtained in trade) brings more speed and durability than does Boyd Gordon, and both he and Scott Walker (also obtained in trade) supply more grit. Chimera also can fill in passably on the third line in the event (such as last night) Tomas Fleischmann moves up to the second line center spot.

On the right side, Mike Knuble is perhaps the biggest upgrade at any position that changed from last spring to now. Viktor Kozlov had two goals and two assists in the series against the Penguins last year but managed only one shot on goal in Game 7. And, he was not a net presence – it has never been his style. Knuble, on the other hand, is something of a Penguin killer (23 goals in 53 career games coming into the season) and can make goalies’ lives difficult with his ability to create traffic in front.

The more subtle difference might be Eric Fehr replacing Chris Clark on the right side. Injuries over two seasons sapped Clark of much of his effectiveness, and that was not more evident than in last season’s Penguin series when Clark collected a single point (a goal in Game 4). At this point in his career, Fehr is probably a more effective forechecking presence, and he is among the most efficient goal scorers in the league so far this season.

On defense, as much grief as Jeff Schultz took last year from Caps fans (especially after a dismal Game 1 against the Rangers in which he was injured), the Caps could hide his absence against the Rangers for the last six games of the first round series. The Rangers just did not have much in the way of offense. But against the Penguins, the cracks in the defense appeared and Schultz’ absence was missed. Part of the Penguins’ ability to bombard goalie Semyon Varlamov relentlessly was the Caps’ inability to move the puck smartly against the aggressive Penguin forecheck. Mike Green might not have been himself, but Milan Jurcina and either John Erskine or Tyler Sloan on the back line provided too juicy an opportunity for the Penguins to cause mischief in the Caps’ end. And the Caps received almost no offensive contribution from that trio – a goal (Jurcina) and an assist (Sloan) in seven games.

The Caps sought to remedy the defensive shortcomings with the addition of Joe Corvo at the trade deadline. Corvo has the capacity to spell Green, who before Corvo’s arrival logged a ton of ice time (almost 25 minutes) in the playoffs. It bears noting that Corvo averaged even more ice time in last year’s playoffs than did Green. If Corvo can make productive use of the extra minutes he might get that a Brian Pothier would not (especially on the power play), Green should be fresher the deeper he goes in a game, in a series, or through the playoff rounds.

The subtle part of this is the addition of Milan Jurcina in trade after having dealt him to Coiumbus earlier in the season. With Jeff Schultz sidelined last year, Jurcina and John Erskine took regular turns on the blue line. This year, in a playoff situation, Jurcina fills perhaps a more suitable role as a depth defenseman, as might John Erskine as Schultz returns. But the wild card here is John Carlson, whose rise has been rapid through the Caps’ system. Don’t forget, Carlson spent most of last year (73 games, regular season and playoffs) in juniors and the year before that was in the USHL. He did get a taste of pro hockey late last year, though, dressing for 16 playoff games with Hershey. And this year, he split his time between the Bears (48 games) and the Caps (20 games), apparently now with the parent club to stay.

Carlson, Jurcina, and Erskine looks a lot better in the 6-7-8 defense roles than a 5-6-7 of Jurcina, Erskine, and Sloan did as the season came to an end last spring.

Injuries late this season might have made General Manager George McPhee look prescient in obtaining Joe Corvo, Milan Jurcina, Scott Walker, and Eric Belanger at the trading deadline. But there are perhaps seven faces that could play in a Game 7 this spring that did not play in Game 7 for the Caps last year. Those seven players add depth, skill, and grit where it was lacking last year.

Last year the Caps learned a hard lesson that culminated with the Game 7 blowout. It wasn’t “Sidney Crosby vs. Alex Ovechkin” that decided the series; it was the lower tiers of the forward lines and defense that did. And the Penguins won that battle. One might look at what the Caps did over the past nine months and think that lessons learned the hard way in Game 7 against the Penguins last spring will be applied this spring should the same situation present itself.
Posted by The Peerless at 3:58 AM No comments: 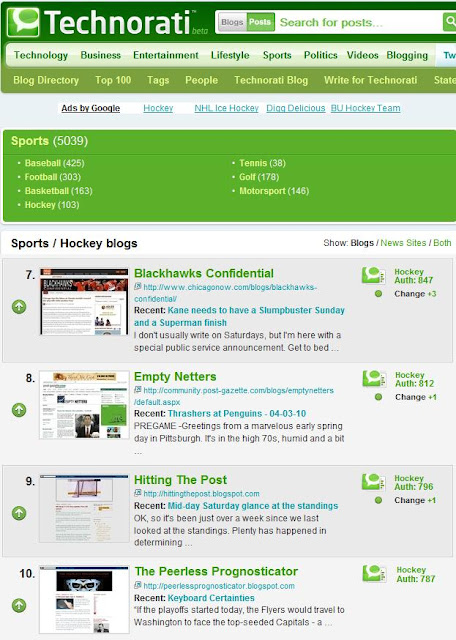