The Peerless Prognosticator is ON THE AIR!!! -- Game 54: Hurricanes at Capitals, February 7th

On the other hand, the recent Hurricane winning streak masks an inconvenient truth.  They have been poor on the road.  They have yet to win consecutive road games this season (although that is what they will be trying to do against the Caps), and they are a dismal 4-11-2 in their last 17 road contests dating back to November 24th.  Their 20 standings points off a 7-14-6 road record is the second lowest in the Eastern Conference (the New York Islanders have 16 points with a 6-10-4 record, holding seven road games in hand on Carolina).

Jordan Staal has struggled on the road this season, especially over the last two months.  He got off on the right foot, recording goal sin three of his first six road games and four in his first nine contests, but he has had just one goal in his last 12 games away from Raleigh.  That one came against the Caps, Carolina’s only goal in a 6-1 loss to Washington at Verizon Center on January 23rd.  He does show evidence of being on a more productive run of late, going 1-3-4, plus-4 (two assists in a 5-4 road win in Brookly over the Islanders last Saturday) in four games since the Hurricanes dropped that decision in Washington.  Staal is 10-7-17, minus-2, in 40 career games against the Caps.

Viktor Stalberg has one of the strangest facts attached to his resume this season.  Of 156 forwards to have played in at least 25 road games this season, Stalberg is the only one not to have recorded an assist on the road this season.  He is 5-0-5 in 26 road games so far.  And as far as his goal scoring is concerned, that seems to have dried up on the road, too.  Stalberg brings a 12-game streak on the road without a goal.  In 13 career games against the Caps, he is 2-1-3, plus-3.

It seems like yesterday that Cam Ward was skating around the ice, one of the least likely Conn Smythe Trophy winners in NHL history, leading the Hurricanes to a Stanley Cup in 2006 as a rookie having played just 28 regular season games.  Today, only 12 of 84 goalies to dress for an NHL game this season are older than Ward, who will turn 33 at the end of the month (he is a February 29th baby).  He has never duplicated that early career success and has never really been a member of the elite niche of goaltender in the NHL, but he is the all-time franchise leader in games played by a Carolina Hurricane/Hartford Whaler goalie (608), the leader in wins (290), losses (224; 298 if you include overtime/shootout losses), .  shutouts (25), and total minutes (34,952).  He, like many of his teammates, has struggled on the road this season, going 6-11-5, 2.86, .895.  It has been more of a struggle lately, Ward going 2-5-0, 3.74, .866 in his last seven road appearances. 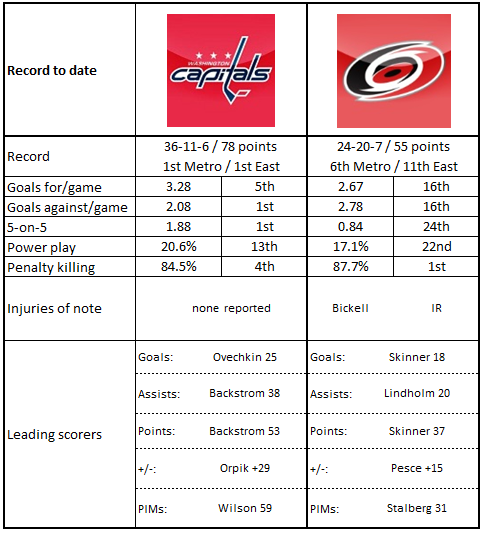 2.  It does not happen often in the NHK, so the .250 winning percentage when trailing after two periods might not sound impressive.  However, it ranks tied for fifth-best in the league (by way of comparison, the Caps’ winning percentage is .200).

3.  No team has more losses when out-shooting the opposition than Carolina (17, tied with Boston).

5.  What Carolina does do well is compile good possession numbers.  The Hurricanes rank fourth in the league in Corsi-for at 5-on-5 (51.76 percent), but those numbers are good only to a point.  Adjusted for score, zone, and venue, Carolina ranks 12th (50.84 percent; numbers from Corsica.hockey).

2.  The Caps lead the league in wins when leading after two periods (27, five more than San Jose). No team has taken a lead into the third period more often than the Caps (29 games).

Justin Faulk is in only his sixth NHL season, but he is already third on the all-time franchise list for points by a defenseman (179), trailing only Dave Babych, who recorded 240 points with the Hartford Whalers, and Glen Wesley, with 227 points.  He was named to the All-Star game roster for the fourth time this season.  Unfortunately, he also happens to rank dead last in the NHL in plus-minus in road games among defensemen this season (minus-21).  No defenseman has spent more time in minus territory on the road this season, Faulk tied with Nikita Zaitsev in games finishing with a minus (16).  Only four times in 24 road games this season did he finish as a plus player and never better than plus-1.  Faulk is 3-6-9, minus-1, in 23 career games against the Capitals.

Plus-minus is that forlorn statistic that has fallen out of favor, but sometimes it matters.  For instance, if you are not a big offensive contributor on defense, every goal scored against you at even strength is likely to be a blemish on that plus-minus record.  And so it is with Brooks Orpik, but lo and behold, Orpik has been a minus player once in his last 28 games (minus-1 in a 3-0 loss to Ottawa on January 24th).  He is a plus-22 over those 28 games.  No defenseman in the league has a better plus-minus over that span (teammate Dmitry Orlov is plus-19).  Not bad for a defenseman who ranks just 113th of 146 defenseman in average ice time over that span (minimum: 20 games played) and who has only six points (all assists).  He has been the epitome of the “stay-at-home” defenseman, the stable partner who lets his running mate jump into the play without undue worry that he won’t be backstopped.  In 43 career games against Carolina, Orpik is 1-10-11, plus-7.

Carolina is a poor road club, and they have had little practice in playing on the road recently, playing only six road games so far this calendar year with a record of 2-4-0.  You would have to think they are a team ripe for the taking, especially since one of those road games was a 6-1 loss to the Caps on January 23rd.  But in the first three games of the season series to date, the Caps have just a 2-1-0 record against the ‘Canes, one of the wins coming in the trick shot competition.  Washington holds just a 10-9 edge in goals scored, and they have allowed a power play goal to Carolina in each of the three games played.  Nothing comes easy.  But then again, you have a juggernaut on home ice facing a team that is a quite different team on the road than it is at home, and not in a good way.

Posted by The Peerless at 8:17 PM No comments: 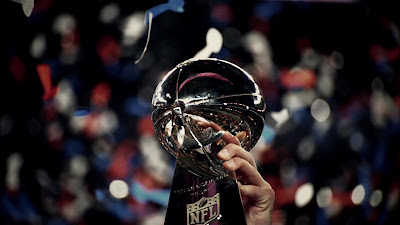 -- A team with skill and experience is never out of it, especially when falling behind early.  That team does its things its way, and fidelity to and faith in that approach yields dividends.

-- On the other hand, if you get out to a lead, pay attention to how you got there.  Was it the product of your philosophy, or was it mere circumstance, like a turnover or a fluke?  A shot from the perimeter that bounces off two bodies and a post for a goal is not evidence of playing the right way.  Don't mistake circumstance for getting results from your devotion to philosophy.

-- It’s a team sport; that’s how you advance through a single-elimination tournament or a best-of-seven series, but stars have to step up in big moments.

-- In football, that means the quarterback…you don’t see lead running backs or tight ends playing that role.  In baseball, it is usually your ace pitcher.  In hockey, that generally means player of a unique position -- a center (Wayne Gretzky, Mario Lemieux, Sidney Crosby, Jonathan Toews) or a goaltender (Patrick Roy, Bernie Parent, Ken Dryden).  There is only so much a winger – even a really good goal-scoring winger – can do (ten wingers have won a Conn Smythe in 51 tries, none more than once).  It is important Alex Ovechkin raise his game in the spring, perhaps more so that Nicklas Backstrom does so, or Braden Holtby.

-- The sports gods really don’t care what you think is fair or who you think should win.  Really…outside of New England, who roots for Tom Brady?  There are no sympathetic characters or villains in how the sports gods deal with wins and losses.

-- The road to victory is neither straight nor smooth.

-- Panic and urgency are not the same thing.  Behave like you’re playing as if you were ahead, even if you are playing from behind.

-- Someone a casual fan has never heard of is going to make a difference…but you can bet that guy is known, and respected, in the locker room.

…here endeth the lesson.
Posted by The Peerless at 10:48 AM No comments: