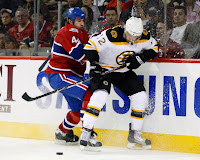 Roman Hamrlik
Theme: “The world is all gates, all opportunities, strings of tension waiting to be struck.”
-- Ralph Waldo Emerson

On June 20, 1992, in Montreal, Roman Hamrlik was drafted first overall in the NHL Entry Draft by the Tampa Bay Lightning. First among 264 players drafted. Nineteen years later, Hamrlik is the “dean” of that draft class, having played in the most games (1,311). He is also among the most traveled, with stops in Tampa Bay (377 games), Edmonton (196), the New York Islanders (300), Calgary (126), and Montreal (312). He has been to the post-season 13 times, where he played another 97 games. All those games in all those cities over all those years. He has yet to play in a Stanley Cup final.

And now, at the age of 37, Roman Hamrlik, seeing perhaps his best chance to win a Stanley Cup, signs with the Caps. Does he still have gas in the tank? Well, in four seasons in Montreal, he did not fail to play in at least 75 games (312 of 328 overall). In that time he was 22-97-119, plus-39. And as to the little things, he was a top-five among defensemen in blocked shots in three of those four years in Montreal. He also did it playing a consistent amount of ice time, an average of almost 23 minutes a game and over those four years ranging from a total of 1,755 to 1,778 total minutes.  Only John Carlson skated more total minutes with the Caps last season.

Last year, Hamrlik was a respectable 1-7-8, even in 30 games against Eastern Conference teams making the playoffs. He was third among Canadien defensemen in quality of competition faced at 5-on-5 (behind fellow vets Hal Gill and Jaroslav Spacek) and was second in plus-minus/on ice at 5-on-5. There is a flip side to that, though. At 5-on-5 Hamrlik had the highest frequency of offensive zone starts among Canadien defensemen playing in at least 50 games (51.6 percent), but yet had a negative Relative Corsi value (which, oddly enough, was third best on the team). The numbers at odds here did not seem to affect outcomes very much; his 2.05 goals against/on ice per 60 minutes at 5-on-5 was second best on the team (all numbers from behindthenet.ca).

The picture painted here is a veteran who has maintained a solid and consistent, if unspectacular level of play as he skates toward the later stages of his career.

Fearless’ Take: There were four defensemen in the NHL aged 37 or older on February 1st (Hamrlik will not turn 38 until April) who played in at least 50 games last season. All of them scored at least 18 points, three of them averaged at least 20 minutes a game (the exception being Sean O’Donnell), and three of them finished in plus territory (the exception was Nicklas Lidstrom of the Red Wings at minus-2). There is still room for contributions from hockey’s equivalent of late middle age.

Cheerless’ Take: Uh, cuz? There were only seven defensemen in the entire league who dressed for at least one game aged 37 or older, and three of them appeared in fewer than 50 games. That’s out of 304 total. And, in 13 playoff seasons, only once did a team for which Hamrlik played reach a conference final. His teams won only four of 17 series in which he has played.

The Big Question… Does Hamrlik really have gas left in the tank?

As a player approaches 40, that becomes a question that might be asked at the dawn of each season they are still in the league. But the consistency of Hamrlik’s performance in his four years in Montreal, especially in skating at least 21:55 per game in each of those four seasons suggests there is something left. He is not likely to have to assume that burden in Washington, but having the capacity to do so in the event circumstances require it is an insurance policy against injuries on the blue line. And, as an added plus to consider, his 4.47 points per 60 minutes of ice time at 5-on-4 was better than any Capital playing in more than 40 games.

There is an element in Hamrlik’s resume that lies outside the boundaries of numbers. It is captured in a June 2011 column by Pat Hickey in the Montreal Gazette…

“[A] plus for Hamrlik is that he has been an effective teacher in the latter stages of his career. He has helped in the development of [P.K.] Subban and [Josh] Gorges in Montreal and, before that, tutored Dion Phaneuf in Calgary.”

The Caps still have four defensemen – Karl Alzner, John Carlson, Mike Green, and Jeff Schultz – with almost 400 fewer regular season games’ worth of experience than Hamrlik. He could have ample opportunities to be an “effective teacher.” If the “multiplier” effect of his ability to impart his 1,300-plus games of wisdom on four young defensemen is his only contribution, it could prove valuable for the Caps in the spring. But there is little except age – it’s just a number – to suggest that there is a likelihood that he will suffer diminishing capacity in his ability as an NHL defenseman.  One with an opportunity for a Stanley Cup.

Mike Green
Theme: “I'm always making a comeback but nobody ever tells me where I've been.”
-- Billie Holiday

One might take that quote in a number of ways as it applies to Mike Green. First off, there is the matter of concussions. He suffered one, perhaps two as a result of: a) taking a shot off his helmet courtesy of Pittsburgh’s Brooks Orpik on February 6th, and b) an elbow to the head from New York Ranger Derek Stepan on February 25th. The latter incident forced Green to miss the remainder of the regular season, but even upon his return his head could not avoid harm. In the series-clinching game of the opening round against the Rangers, Green took a shot from the Rangers’ Matt Gilroy flush in the noggin, popping screws off his helmet. One might forgive Green if a good portion of the season was remembered only through a fog.

The result of his assorted injuries was that Green missed a total of 33 games, the 49 games he did play being the lowest number of games played since his first year in Washington, in 2005-2006. It brought the total of missed games for Green to 54 over the past three seasons after he played in all 82 games in the 2007-2008 season. And it is this trend, forged over the past three seasons, that is of as much concern as the nature of the injuries he suffered last season.

But when Green was in the lineup, something interesting was going on, and that brings us to the second way you might take that quote. In 2008-2009 Green scored 31 goals in only 68 games played, a 37-goal scoring pace ove 82 games. But was he sacrificing defense to that end? He had the second highest Corsi value on-ice at 5-on-5 that season among defensemen playing in at least 50 games, but his relative Corsi value dropped to 12th in that group (numbers from behindthenet.ca). Think it was a big drop? Well, here is context. 110 defensemen that season were on ice for more goals than Mike Green. That would be roughly consistent with his ranking 98th in quality of competition faced, but the picture is one of a generally competent defenseman, not a forward in defenseman’s clothing.  He hasn't "been" anywhere; he's been there all the time, a better defenseman than many might think.

In 2009-2010 Green did himself one better – or three better, actually – in points scoring, going from 73 to 76 points and again being a better than a point-per-game scorer from the blue line (75 games). He did it facing a bit stiffer competition (86th among defensemen at 5-on-5 playing in at least 50 games), although his relative Corsi value dropped to 36th in that group of defensemen. There was still the matter of there being 48 defensemen in the league having been on the ice for more goals against than Green. Last season there were 157, although that can be attributed to his missing those 33 games. He did slip, though, in quality of competition faced, no doubt a product of the competition burden the kid defensemen – Karl Alzner and John Carlson – were bearing.

Fearless’ Take: Over the last four seasons Green has grown into a more physical player. His hit totals have increased, on a per-82 game basis, from 94 to 133, dropping to 115 before jumping to 182 last season.

Cheerless’ Take: That takeaway-to-giveaway ratio of 0.56:1 over the past four years isn’t anything to get all excited about. Compare that to some defensemen of note last season. Shea Weber was 1.22:1. Kevin Bieksa was 1.22:1. Dan Hamhuis was 1.30:1. Marc Staal was 1.46:1. How those things are scored might vary by the scorer’s eye from rink to rink, but that’s still a mighty big difference.

The Big Question… Has Mike Green’s injury trend made him less valuable to the Caps?

The Caps certainly have hedged their bets in answering this question with Dennis Wideman and Roman Hamrlik in the fold, either one being able to provide some offense (they combined for 74 points last year), although whether either is an upgrade to Green on defense is an open question (Hamrlik perhaps being the best among the three). The answer to this question, however, might have to wait until the season is over. There, the intersection of both Green and John Carlson reaching restricted free agency might force the Caps into an either/or choice. And if Green’s health is again an issue, it would have to impact his value to the club.

Back to the original statement. Mike Green might be poised to make something of a comeback in terms of his scoring statistics, although like other Caps we looked at, we think we have seen his career year. That doesn’t mean he will not remain a dangerous offensive player. And he is among the better puck-carriers in the league. He does remain a high-risk/high-reward player in that last season he was second on the team in giveaways and among the top 35 in the league, despite missing those 33 games.

He is not, however, as commonly assumed, a liability on defense. Be assured, if there was a Rod Langway Award for top defensive defensemen, Green would not soon be among the finalists for such an award. But the giveaway issue aside, he is a better defenseman than that for which he is given credit. As we noted, “where he has been” is right where he is – a competent defenseman in his own zone who has superior gifts in the offensive zone. With this team, though, and the manner in which they have provided for depth in the kind of defenseman Green is, he is not likely to approach those career numbers set in 2008-2009 or 2009-2010.