...well, draw your own conclusions about how to end that sentence upon reading what Pat Morris -- agent for Ranger forward Sean Avery -- had to say about his client...

"...the balance, I think, is every coach says: 'Bring me a guy who wants to compete, who wants to win, who leaves his best on the ice. And off the ice, if he's an ax murderer, as long as he leaves his ax at home when he comes to play...'"

Morris went on to say that he wasn't comparing Avery to an axe murderer, just making a point that Avery "comes to play." 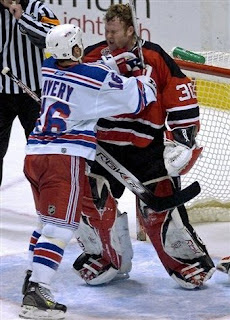 It looks as though he'll be taking his sticks and his axe to another team.

Wonder if it will be Jersey?

Posted by The Peerless at 8:15 PM No comments:

Was this power forward drafted?

Maybe teams were scared off because of the transfer agreement issues...

When the TV lights go off. Tampa Bay drafted Steven Stamkos #1, then didn’t have another pick until #117 in the fourth round. But they might have had the classiest pick of all – David Carle in the seventh round. Carle, brother of San Jose defenseman Matt Carle and ranked 60th among North American skaters by Central Scouting, circulated a letter on the eve of the draft to all 30 teams informing them that he was withdrawing from the draft because he had been diagnosed with hypertrophic cardiomyopathy, a heart ailment discovered by doctors during testing for the NHL combine last month. One of the new owners of the Lightning – Oren Koules, who is acquainted with the Carle family – said, "The kid worked his whole life to be drafted in the NHL, and I didn't see a reason he shouldn't be." David and Matt thus become the only brothers from Alaska drafted into the NHL. It was a nice gesture on the part of Koules and the Lightning.

“Mr. Irrelevant.” It is a title that stems, by and large, from the history of the NFL draft and applies to the very last player drafted, who often has very long odds of making the team that drafted him. This weekend, the NHL’s “Mr. Irrelevant” is a forward from Sweden – Jesper Samuelsson. Samuelsson (not ranked by Central Scouting among European skaters) had 62 points and 73 penalty minutes in 40 games. But is he “irrelevant?” Not so fast. He will play for Timra IK in the SEL this coming season. The Wings have another graduate of that club on their roster – Henrik Zetterberg. 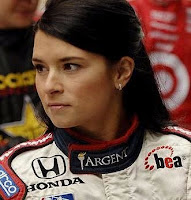 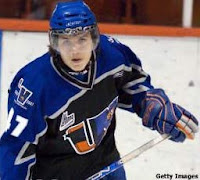 Atlanta had seven picks in this year’s draft, and if you read the roster of picks really fast, you might be left with the impression they selected race driver Danica Patrick with their third round pick. Nope…it was Danick Paquette.

More names… The Carolina Hurricanes dipped into the storied history of the University of North Carolina Tar Heels basketball program for their fourth-round pick…Michal Jordan. OK, Jordan (Michal, not Michael) is a defenseman from Plymouth of the Ontario Hockey League. We don’t know if he can dunk a basketball.

Great names. We don’t think any sport has names as interesting as those in hockey. Some of the examples coming out of this draft…

- Eero Elo…a 5th round draft pick at left wing out of Lukko Jr., by Minnesota

- Nathan Moon…a 4th round selection at center from Kingston in the OHL, by Pittsburgh

- Prab Rai…selected by Vancouver in the 5th round, a center out of Seattle in the WHL

- Teighan Zahn…a defenseman from Saskatoon in the WHL, taken in the 5th round by Chicago

- Geordie Wudrick…taken by Los Angeles in the 3rd round, a left wing from Swift Current in the WHL

Past as prologue. There are more than a few names with NHL pedigrees coming out of this draft. Anton Gustafsson (son of Bengt) is best known by Caps fans. But there are a lot of draftees with names shared with former hockey personalities. We can’t vouch for whether all are related to their surnamed predecessors, but here are a few…

Just some stuff to think about on a Sunday afternoon…

Picking prospects is an uncertain endeavor. Today's 18-year old picked in the first round might be bagging groceries by the time he's 25. Conversely, that 210th pick might turn out to be a Henrik Zetterberg.

Looking at the Caps, the group of under-25 prospects/players speaks well of Caps management at least putting the club in the position of being able to compete over the foreseeable future. You might quibble with the names, adding or subtracting your own, but here is an example of a team the club could ice this morning of only under-25 players (their 2008 opening night ages in parentheses)... 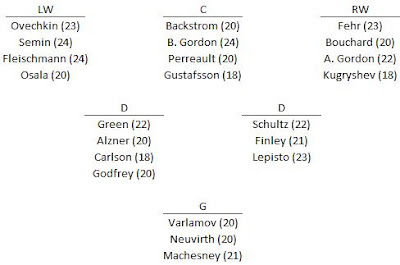 Posted by The Peerless at 9:34 AM No comments:

The Caps completed their draft weekend by selecting a trio of forwards. Here they are (summaries courtesy of nhlentrydraft2008.com)…

· Participated in the 2006 Under-17 World Hockey Challenge representing Team West.

· His first team was the East Hill Canadians and he played in the Prince Albert Minor Hockey Association near his hometown of Kamsack, Alberta for 14 years.

· He got his start in hockey at the age of four when he was at the local rink, he found a broken stick and after showing it to his dad, he put him in hockey that year.

· Patterns his game after Edmonton's Jarrett Stoll because "he's a solid two-way centerman with a good shot and he's a character player."

· Credits his parents for having had the most influence on his career – "they have been there every step of the way and have given me a lot of support".

· If he could invite any three people to dinner he would choose: Sidney Crosby, Joe Sakic and Bill Gates.

· His most embarrassing hockey moment was getting hit so hard in his first year of contact hockey that he skated to the other team's bench and the one thing he couldn't live without is his phone.

"Needs to work on his consistency and play with intensity on every shift – has the tools to be a pro but must use them. He skates well and has good speed. He is certainly big enough to play the role of a power-forward centerman."

"We are very excited to have the opportunity to acquire an offensively skilled, two way centerman, that also brings tremendous character to our dressing room. This move allows us to improve on our culture and provides us with balance throughout our lineup."

Here is some video on young Mr. Della Rovere…seems to have an adequate helping of ornery (14 fights this year):

Posted by The Peerless at 8:36 AM No comments: