Over at Off Wing Opinion, Eric McErlain goes off -- quite properly, in our opinion -- over the matter of the appearance of Team USA goalie Jonathan Quick's goalie mask. Citing a New York Times report on the application of International Olympic Committee Olympic Charter Rule 51 (Advertising, Demonstrations, Propaganda), Quick's helmet was found to be in technical violation of the Rule for the inclusion of the slogan, "Support Our Troops." Such a slogan is, in the eyes of the IOC, political "propaganda" under the Rule, which states:

1. The IOC Executive Board determines the principles and conditions under which any form of advertising or other publicity may be authorised.

3. No kind of demonstration or political, religious or racial propaganda is permitted in any Olympic sites, venues or other areas.

1. No form of publicity or propaganda, commercial or otherwise, may appear on persons,on sportswear, accessories or, more generally, on any article of clothing or equipment whatsoever worn or used by the athletes or other participants in the Olympic Games, except for the identification – as defined in paragraph 8 below – of the manufacturer of the article or equipment concerned, provided that such identification shall not be marked conspicuously for advertising purposes.

1.1 The identification of the manufacturer shall not appear more than once per item of clothing and equipment.

1.3 Headgear (e.g. hats, helmets, sunglasses, goggles) and gloves: any manufacturer’s identification over 6 cm2 shall be deemed to be marked conspicuously.

1.4 Clothing (e.g. T-shirts, shorts, sweat tops and sweat pants): any manufacturer’s identification which is greater than 20 cm2 shall be deemed to be marked conspicuously.

1.6 In case of special rules adopted by an International Sports Federation, exceptions to the rules mentioned above may be approved by the IOC Executive Board. Any violation of the provisions of the present clause may result in disqualification or withdrawal of the accreditation of the person concerned. The decisions of the IOC Executive Board regarding this matter shall be final. The numbers worn by competitors may not display publicity of any kind and must bear the Olympic emblem of the OCOG.

2. To be valid, all contracts of the OCOG containing any element whatsoever of advertising, including the right or licence to use the emblem or the mascot of the Olympic Games, must be in conformity with the Olympic Charter and must comply with the instructions given by the IOC Executive Board. The same shall apply to contracts relating to the timing equipment, the scoreboards, and to the injection of any identification signal in television programmes. Breaches of these regulations come under the authority of the IOC Executive Board.

3. Any mascot created for the Olympic Games shall be considered to be an Olympic emblem, the design of which must be submitted by the OCOG to the IOC Executive Board for its approval. Such mascot may not be used for commercial purposes in the country of an NOC without the latter’s prior written approval.

4. The OCOG shall ensure the protection of the property of the emblem and the mascot of the Olympic Games for the benefit of the IOC, both nationally and internationally. However, the OCOG alone and, after the OCOG has been wound up, the NOC of the host country, may exploit such emblem and mascot, as well as other marks, designs, badges, posters, objects and documents connected with the Olympic Games during their preparation, during their holding and during a period terminating not later than the end of the calendar year during which such Olympic Games are held. Upon the expiry of this period, all rights in or relating to such emblem, mascot and other marks, designs, badges, posters, objects and documents shall thereafter belong entirely to the IOC. The OCOG and/or the NOC, as the case may be and to the extent necessary, shall act as trustees (in a fiduciary capacity) for the sole benefit of the IOC in this respect.

5. The provisions of this bye-law also apply, mutatis mutandis, to all contracts signed by the organising committee of a Session or an Olympic Congress.

7. The identification on all technical gear, installations and other apparatus, which are neither worn nor used by athletes or other participants at the Olympic Games, including timing equipment and scoreboards, may on no account be larger than 1/10th of the height of the equipment, installation or apparatus in question, and shall not be greater than 10 centimetres high.

8. The word “identification” means the normal display of the name, designation, trademark, logo or any other distinctive sign of the manufacturer of the item, appearing not more than once per item.

Did you get all that?

Team USA goalie Ryan Miller was similarly found in violation for his "Miller Time" scrawl on the back of his helmet. Miller agreed to removing the phrase, insofar as it could be interpreted as a take on the brewing company slogan (advertising also being a no-no). Miller seemed inclined to draw the line at removing the phrase "Matt Man" from his helmet, a tribute to his cousin, Matt Schoals, who died in 2007 from complications from a bone marrow procedure after fighting leukemia.

If the National Football League is the "No Fun League" when it comes to the slightest indiscretion with respect to the uniform the players wear, the IOC has upped the ante. Frankly, we think they've lost what little minds they have. We're guessing that this sort of goalie mask would be frowned upon... 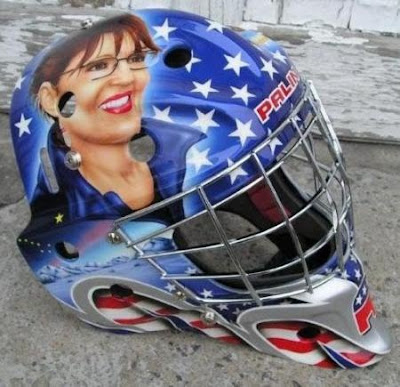 Call it a hunch.
Posted by The Peerless at 9:30 AM No comments: