Perils of a pepperoni, sardine, and marshmallow fluff pizza…

We’re talking realignment again, and today’s question is, “What would the NHL look like if the NCAA ran the show?” Well, it might look something like this… 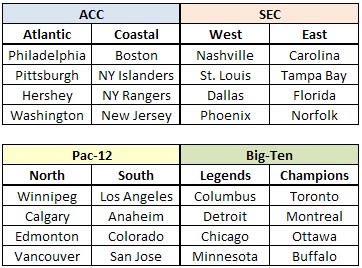 The first thing you can see is that the new scheme has conferences named in the NCAA style – ACC, Big Ten, SEC, and Pac-12. You will also note that the Big Ten is like its NCAA counterpart in that there are not ten teams, but it has adopted the pretentious “Legends” and “Champions” division names.

The ACC employs division names – “Atlantic” and “Coastal” just as its NCAA version does…that’s so you get it through your college educated skull that this is the ATLANTIC COAST(al) Conference. It says a lot that a conference would need to employ that sort of trick to remind cocktail-addled alumni and beer-soaked student bodies where there school (or hockey team) plays.

You’ll note that the ACC also has a new team – Hershey, which has graduated in this scheme from Division II…uh, the AHL…to the “BCS” (Bettman Championship Series) conferences. Ditto for Norfolk in the SEC, because it would have made sense to move a Wilkes-Barre/Scranton or perhaps a Houston Aeros into the BCS, but this being the “Bettman” Championship Series, a team with no hope of being able to draw well (currently 20th in AHL attendance) is added, mainly because they’re in the sunny south by NHL standards.

The Pac-12 has only eight teams, but they will travel as if they had one-and-a-half times the road trips. Those Anaheim to Winnipeg jaunts will be lovely for the sun worshippers in February.

But what about playoffs? To that we say, “what playoffs?” The NHL will prepare a schedule that for each team will be heavily loaded with non-conference games against patsies in the first months of the season (everyone gets to play Columbus five times before January 1st). Each week, various outlets (The Hockey News, ESPN, Puck Daddy) will publish their top-25 rankings. People on both sides of the Canada/US border will complain that their team suffers from some bias or other.

But the fun will begin after New Years. At that point, a combination of computer models (Sagarin, Colley Matrix, the girl on “Big Bang Theory”) will spin up and spit out their own rankings every week, which will be aggregated into a “BCS ranking” that absolutely no one will understand and fewer people will believe.

Rankings will go back and forth, forth and back, up and down, from January through March. At that point, the regular season will end, and the divisional champions will meet in conference title games. Imagine the excitement! Chicago taking on Toronto in a Legend Meets Champion game…Washington putting the “A” in ACC against the Bruins defending their “C”…Vancouver against San Jose in the Pac-12.

No one will care who is playing in the SEC for a change.

But there’s more! In the six weeks that will pass between the end of the regular season and the BCS Championship Game, there will be a host of other games – “bowl” games, if you will. There will be a long list of convoluted rules that spell out which teams qualify for “BCS” bowl games (those games played in BCS cities not hosting a BCS title game) – The Tim Horton Donut Bowl in Toronto…the Canadian Tire Lugwrench Bowl in Ottawa…the Bank of Montreal Snow Bowl in Montreal. No one will understand how their team ended up playing in the Rogers Communications Gray Owl Bowl in Manitoba, but they’ll be proud their team made a bowl game nevertheless.

We just can’t figure out, though…who plays Notre Dame?
Posted by The Peerless at 12:55 PM 2 comments:

The Peerless Prognosticator is ON THE AIR!!! -- Game 13: Capitals vs. Stars, November 8th

Big D comes to D.C. to try and take a W out of VC. That’s right, Caps fans…the Dallas Stars come to town for their only visit of the 2011-2012 season to Verizon Center, looking keep the Caps from leap-frogging them to the top spot in the league’s winning percentage rankings. The Stars are currently on top with a .769 points percentage to the Caps’ .750. Here is how the teams stack up so far in the young season… 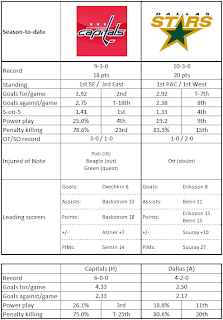 Even though the Stars come to town on a three-game winning streak, they might be ripe for the taking. In their first nine games they allowed more than two goals only once. But in their last four they have allowed three or more twice, including a 5-3 loss to Los Angeles and a 7-6 overtime win over Colorado. It’s a team that has shown some cracks in that sturdy defensive façade, and as we’ve seen with the Caps from time to time, the signal of a winning streak coming to an end usually comes a few games before that streak ends.

1. Loui Eriksson was named the league’s second star for last week, and he is hardly a fluke. The 26-year old winger has improved his point totals in each of his five previous seasons, setting a personal best of 73 points last season. He is on a 50-goal, 94-point pace at the moment and is riding a four game points streak (3-5-8). He is 1-2-3, even, in four career games against the Caps.

2. Beware on the power play. The Stars are tied for the league lead in shorthanded goals (three). One of those shorthanded goals comes from a familiar face…at least a face familiar to Hershey Bear fans. Defenseman Sheldon Souray, who skated in 40 regular season and six playoff games for the Bears last season after being banished from Edmonton, potted a shorthanded goal against New Jersey on October 29th. Souray has gotten off to a flying start – 4-8-12, plus-10, in 13 games so far. He comes into this game on a three-game streak of two-point games, and he has three goals in his last five games. In 29 career games against the Caps he is 5-12-17, minus-1.

3. When Ken Hitchcock was patrolling behind the Stars’ bench, Dallas was known as a suffocating team on defense, his teams more often than not holding teams to fewer than 25 shots on goal a game. The stinginess continued when Dave Tippett took over as head coach of the Stars. It became something that defined Dallas’ style of play. So far this season the Stars rank 29th in shots against. Only Nashville has allowed more than the 33.2 shots per game allowed by the Stars. It makes the performance of goaltender Kari Lehtonen rather remarkable. 10-1-0, 2.14, .936 in 11 games while facing an average of 33.5 shots per 60 minutes. But the heavy workload might be wearing on Lehtonen. In his last four games he is 3-1-0, but with a 3.20 goals against average and a .902 save percentage. He is 10-6-2, 2.80, .919, with one shutout in his career against the Caps.

4. Chances are this will not be a blowout for either team. In 13 games so far the Stars have one win of three or more goals and one loss by the same margin. Only two teams – Minnesota and Edmonton – have fewer decisions by three or more goals.

5. This could turn on special teams in this respect. Only three teams have allowed more than the 11 4-on-5 goals Dallas has allowed. While Dallas has a fairly efficient penalty kill (83.3 percent), only Ottawa has faced more shorthanded situations (66 in 13 games).

4. Roman Hamrlik has 154 goals in his career. Only one of them has come against Dallas in 38 career games played against the Stars.

5. No team has more three-or-more goal wins so far this season than do the Caps (four). Only three teams have more one-goal wins than the five that the Caps have…Dallas happens to be one of them (six).

Jamie Benn has progressed nicely as a budding power forward for the Stars. He posted 22-goal seasons in each of his first two seasons, and he is currently tied for the team lead in points (4-11-15). Benn has no points in two career games against the Caps, but he has seen a number of the Caps before. Benn was the leading scorer for Dallas’ affiliate in the AHL – the Texas Stars – in the 2010 Calder Cup playoffs. But he ran into a stone wall when his Stars faced Hershey in the Calder Cup final. He had only one assist in six games as Hershey won the championship in six games. There might be some scores to settle.

Troy Brouwer has five goals and ten points in 12 regular season games against Dallas. He does not have more goals or more points against any other team in the league over his career. He has goal in two of his last three games and points in three of his last four (2-2-4).

1. Force the action. Between the Stars giving up a lot of shots, taking a lot of penalties (second highest number of minors in the league), and Lehtonen slipping of late (assuming he gets the call), the Caps can take advantage of a high-tempo sort of game.

3. Beware the blue line. Sheldon Souray has those four goals and 12 points for Dallas, but as a group the top four defensemen for the Stars have nine goals and 26 points (compare that to eight goals and 27 points for the Caps’ top four). Five of those goals have come on the power play.

In the end, this is the start of a rough patch for Dallas – at Washington, at Pittsburgh, and at Detroit (the latter two being back to back). It will be a test of Dallas’ discipline to avoid looking at this week as one big tough piece, to take the games one at a time and avoid looking ahead. The Caps were embarrassed a bit in their last game – a loss to an Islander team that scored five goals for the first time in four weeks. That should provide some measure of motivation to bring their “A” game against a formidable opponent.