The Peerless Prognosticator is ON THE AIR!!! -- Caps at Penguins, February 21st

Finally, after four games over seven days, trips back and forth across the continent covering 5,105 miles, and splitting those four games into two wins and two losses, the Caps find themselves at the end – or perhaps the bottom, given the locale – of their longest road trip of the season.

Welcome to Pittsburgh, where among other things…

-- There are more bridges than any other city in the world, except Venice, Italy
-- The first emoticon was created (for the record, the “smiley”) by Scott Fahlman of Carnegie-Mellon University
-- The “Big Mac” was invented by local McDonald’s franchise owner James Delligatti
-- The game of “Bingo” was created
-- The “banana split” was invented (ok, it was actually in Latrobe, but close)
-- The city motto is “benigno numine,” or “by the favor of the Heavens.”

We’re thinking the Penguins’ motto should be “benigno bettmane.”

The Caps get an opportunity to break in Consol Energy Center the right way in this, their first visit to the Palace on Fifth Avenue (no, not that Fifth Avenue). And they will be hosted by a team that has been decimated by injury. Although the total numbers for the Penguins look rather good compared to those of the Caps… 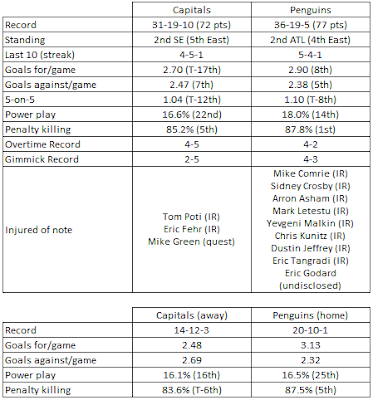 …it bears noting that 85 of the 174 goals the Penguins have scored so far this season are on injured reserve. It means that the Penguins’ top three goal scorers are out and that their leading goal-scorer to dress for this game is likely to be Tyler Kennedy (12). Kennedy, a somewhat undersized fire plug of a player, has elevated his offensive game in the absence of the big scorers. He has five goals in his last nine games and points in six of nine. What he does not have, however, is a goal against the Caps – this year or any other year. In 13 career games against the Caps he is 0-2-2.

Matt Cooke is second on the Penguins in goals, at least among players likely to dress on Monday. He has never been considered much of a scorer, but over his last 26 games he is 7-6-13. Not a bad level of production for essentially a third line forward. But what overshadows his occasional contribution on the scoreboard is his interminable effort to retire the title of “Dirtiest Player in the NHL.” Cooke has 36 minutes in penalties in his last five games. And his rap sheet in those five games is a snapshot of the image fans have of him – two ten-minute misconducts, a five for fighting, a five for charging, two two-minute roughing calls, and a two-minute penalty for tripping. For the year he has nine roughing penalties, three fighting majors, a charging penalty, three boarding calls, a slash, a kneeing, a high-sticking penalty…you get the idea. When he is not the one committing the penalty, beware of him on the penalty kill – he has three shorthanded goals so far this year. In 18 career games against the Caps he has a goal and three assists…oh, and “only” 14 penalty minutes.

By comparison, Pascal Dupuis – the only other Penguin likely to play on Monday with at least ten goals – might be better named “Placid” Dupuis, even though he has 57 penalty minutes in his 59 games. His scoring has gone dark lately. Since getting the game-winner against Carolina on January 22nd, Dupuis has not lit the lamp in his last 11 games. He has only two goals in his last 25 games. However, Dupuis does have the only game-winning “goal” for the Penguins in the last seven contests between the teams, a Gimmick tally in the Penguins’ 3-2 win on December 23rd.

The Caps have their kiddie defensemen – John Carlson and Karl Alzner (193 regular season games played between them) – and the Penguins have theirs, although it is a relative term given the veteran blue line help the Penguins signed in the offseason. Alex Goligoski and Kris Letang each have played in all 60 games for the Penguins this season, 454 career games between them. Both have been productive offensively this season (Goligoski being 9-22-31, Letang 8-37-45), both have had success on the power play (each with four goals), both have been responsible enough overall (Letang is plus-16, Goligoski plus-19). And of the 32 game-winning goals for the Pens this season, they have six of them between them. Letang is 1-4-5 in 13 career games against the Caps; Goligoski is 1-2-3 in nine career games against Washington.

With Marc-Andre Fleury getting the nod in Chicago yesterday, Brent “Rocky” Johnson might be getting his first crack at the Caps this season. If you haven’t been paying attention, and odds are that you haven’t, Johnson is second in the league in penalty minutes this season among goaltenders, all of his 24 minutes earned in his last four appearances, and 22 of those coming in two games against the Islanders (no coincidence, the league leader in PIMs among goalies is the Islanders’ Rick DiPietro). Ten of the penalty minutes came courtesy of these tender moments captured on video…

The odd part of those two games against the Islanders for Johnson was that he had 20 saves in each. In the first, 20 saves on 20 shots in a 3-0 shutout in Pittsburgh. In the second, though, it was 20 saves on 27 shots in only 44 minutes of work in a 9-3 loss to the Islanders on Long Island. Until that second game, Johnson had put together quite a season as Marc-Andre Fleury’s backup – a 1.90 GAA and .929 save percentage, numbers that deteriorated to 2.27 and .917 after the adventure on Long Island. Johnson has not played since giving up those seven goals to the Islanders. In seven lifetime appearances against the Caps he is 4-2-0 with a 2.05 goals against average.

Jordan Staal has logged a ton of ice time since coming back from his own injuries that kept him out of the lineup until appearing in the Winter Classic on January 1st. In 21 games since he has averaged almost 21 minutes a game, and in his last nine games has averaged almost 24 minutes a game. That includes yesterday’s game in which he skated 20:45 before taking a puck to the face (it is uncertain whether he will play). With Sidney Crosby and Yevgeni Malkin out, Staal is the man in the middle for the Penguins. He has stepped up his game lately with three goals and three assists in his last five games. The question is, though, with all the additional minutes and the heavier offensive burden he has to carry, will it affect his play as one of the top defensive centers in the NHL? And if he is out, who centers Pittsburgh’s top line?

Nicklas Backstrom has had a problem very similar to Alex Ovechkin’s over much of the season. For long stretches, Ovechkin has not been able to score goals. In Backstrom’s case, it has been a lack of assists. Perhaps these are two sides of the same coin, but Backstrom has only two assists (both in the 7-6 slugfest in Anaheim last week) in his last seven games, only four in his last 11 games. When he is setting things up, the Caps are successful; he has 30 assists in 30 wins so far this season. When he isn’t? Well…eight helpers in 29 losses. He has 21 assists in 15 career games against the Penguins.


1. Play against the logo, not the names. The name plates on the back might say “Sterling,” “Conner,” and “Vitale” as they did in the game against Chicago yesterday, and they are 2-4-1 in their last seven games, but these are still the Penguins. Take them lightly, and it could be an embarrassing night.

2. No hanging around. Of the last seven Penguin wins, six have been of the one-goal variety. If the Caps let these guys hang around, they have been resilient enough to pull out wins.

3. Never give up, never surrender. The Caps have the second best record in the league when trailing first. Of course, this might be a product of getting so much practice. Only six teams have allowed the first goal more often than the Caps, who have done it 34 times in 60 games. In the two games the Penguins scored goal in this year’s season series (they were shutout once), they scored first. The Caps are 1-0-1 in those games.

In the end, the Caps are 9-0-2 in their last 11 regular season games against the Penguins. It is the longest points-earned streak of games in the history of this series since the Caps went 15-0-1 against the Penguins from October 25, 1983 through November 20, 1985 (and you young folks think the Penguins always won these games). Given the relative states of health on the respective rosters, the Caps should extend this streak. What is more, the Penguins might be showing cracks in the strongest part of their game – penalty killing. They are 31-for-37 on the PK this month (83.8 percent) and 11-for-16 (68.8 percent) in their last four games.

The Caps might not be at the top of their game, but the Penguins just are not (or should not be) healthy enough or talented enough to keep up. This could be the chance for a breakout. The Penguins’ best hope might be if Brent Johnson beats up Alex Ovechkin.