The Hershey Bears defended their Calder Cup championship won last year in style last night, shutting out the Texas Stars in Game 6 of the Calder Cup final, 4-0, to earn the eleventh Calder Cup in franchise history.

The four goals the Bears scored in the Cup-clinching win were all scored by defensemen – Patrick McNeill with a pair, John Carlson, and Karl Alzner. And, Hershey’s defense permitted only 22 shots to reach goalie Michal Neuvirth, who turned all of them away to earn his first shutout of the post season.

The game was not as close as the score indicated. Hershey came out storming, a far cry from the frustrated club that lost the first two games of the series on Giant Center ice. The Bears apparently learned some lessons in breaking down the Stars’ defense, peppering goalie Brent Krahn early and often. In fact, it was Krahn (returning to the lineup and getting his first start in the series) who kept the Stars in the game early. But the Bears did a fine job working the puck in deep, then winning battles to get the puck out in front for scoring chances.

What Krahn could not do, however, was kill penalties. Hershey got a power play chance when Aaron Gagnon was sent off for high-sticking 11:49 into the first period. Forty seconds later, John Carlson pounced on a loose puck in the slot, out of Krahn’s reach, and buried it in the back of the net to give the Bears the only goal they would need. Karl Alzner doubled the lead less than three minutes later, scoring on a drive from the left point as Steve Pinizzotto was screening Krahn. The first intermission ended with the Bears up, 2-0, and dominating the shot total, 17-4.

In the second period, the teams not only switched ends, but apparently switched styles as well. Texas came out aggressively, and Hershey looked a bit timid. But with five minutes remaining in the period, the Bears were putting pressure on the Stars. Patrick McNeill was rewarded for the overall hard work on the part of the Bears, putting back a rebound of his own at 14:47 of the period to give the Bears a 3-0 lead at the second intermission.

McNeill repeated his success in the third, netting a power play goal to drive the final nail into the Stars’ chances for a comeback. Not that the Stars quit, but any means, for after the McNeill goal they mounted their most sustained attack of the game. But goalie Michal Neuvirth made three fine glove saves in succession that had the Stars looking into the rafters in frustration. All that was left was for the Bears to play smart and hard, forcing the Stars to skate all 200 feet of the ice to have any chance of scoring. Neuvirth took care of the rest, turning away ten shots in the period and earning the shutout, thrusting his arms skyward as the final seconds ticked away on the Bears’ repeat as Calder Cup champion.

Chris Bourque was named the winner of the Jack A. Butterfield Trophy as the most valuable player of the playoffs. He tied Alexandre Giroux for the overall points lead in the playoffs (27). Bourque’s win continues the history of the trophy never having been won by any player twice. 26 times it has been awarded, 26 different players have won it.

This was a night for the prospects. Carlson’s goal was the game winner, but his play in his own end was top notch. Particularly noteworthy was his contribution to holding Jamie Benn to a pair of assists for the series and a minus-3 rating. Karl Alzner had a fine game in his own end as well (despite performing a face-plant behind his own goal on one occasion). Neuvirth did not have to be spectacular for most of the game – the Bears did a good job of keeping the Stars to the outside – but he was certainly on his game in the last ten minutes when he was called upon to step up in defense of his own shutout. Those three glove saves coming with about five minutes remaining in the game were exclamation points on a fine overall playoff performance for the still rookie netminder.

-- Along with Patrick McNeill, Carlson and Alzner combined for ten of the Bears’ 36 shots on goal and all four goals.

-- The Bears set a Giant Center attendance record of 11,002. You would have been hard pressed to find any unoccupied seats, too. Not many no-shows.

-- Jay Beagle did not crack the scoring column (he did record an assist), but he had a whale of a game chasing down pucks and making things difficult for the Stars when they controlled (or tried to control) the puck.

-- In the end, Texas simply could not compete with Hershey at even strength. Even though the Bears scored two goals on four power play opportunities last night, they dominated the play at 5-on-5. In the final four games of the series – all won by Hershey – the Bears outscored the Stars 10-2 at even strength.

-- What a different age we live in... it seemed that every Bear had a cell phone in the post-game celebration and was either talking to someone or texting.  And there was Steve Pinizzotto getting everything on video.

It was a great night for the Bears and their fans. We had the opportunity to capture some of it in images… 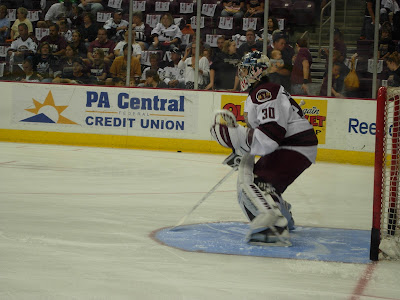 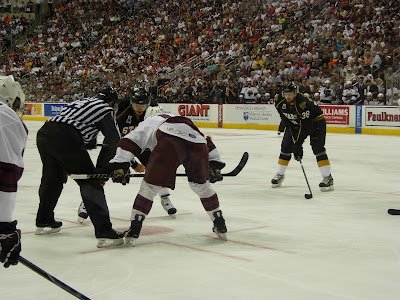 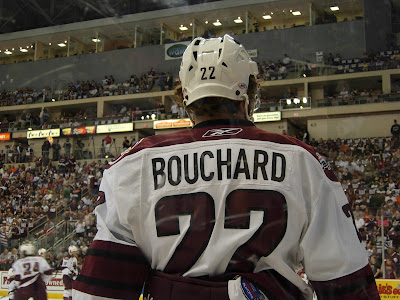 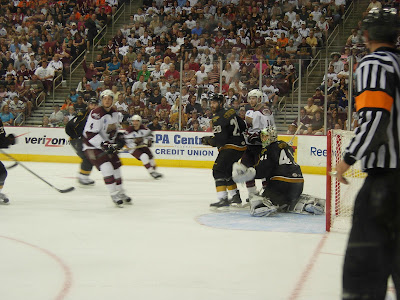 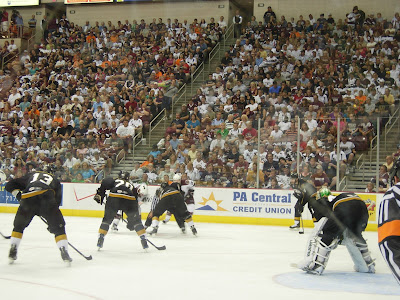 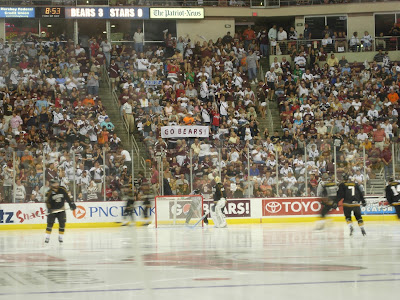 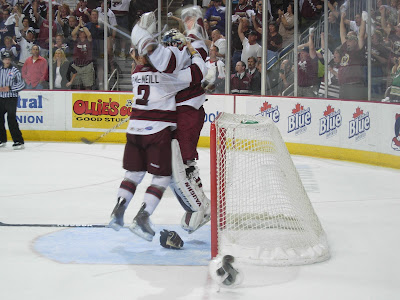 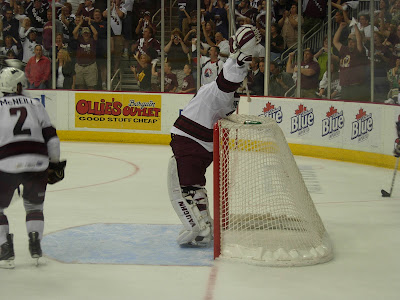 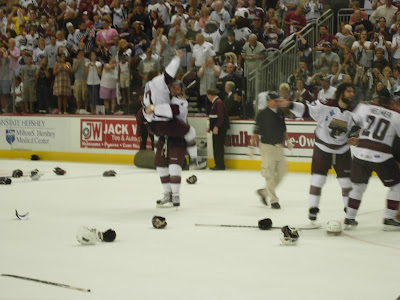 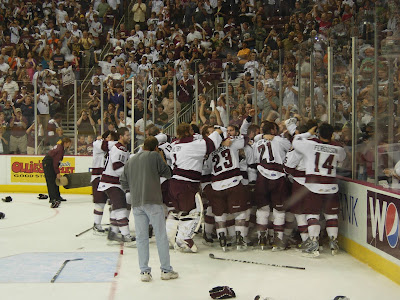 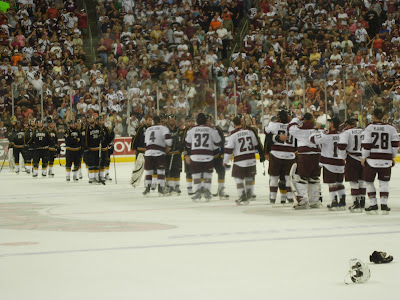 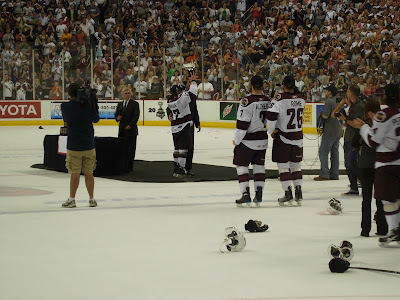 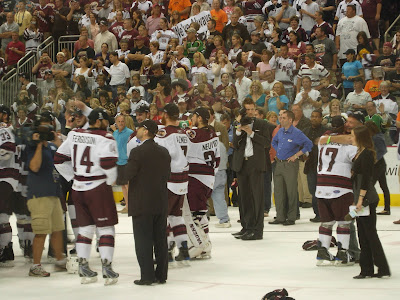 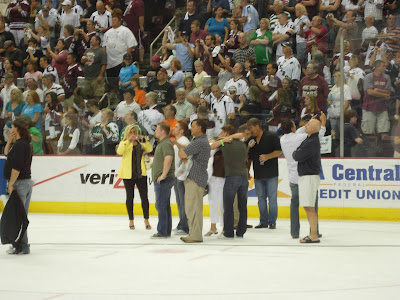 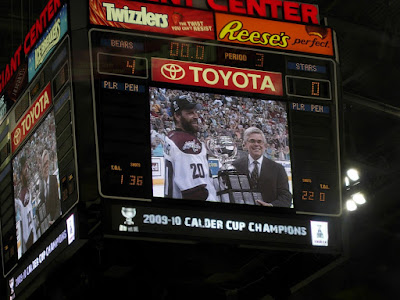 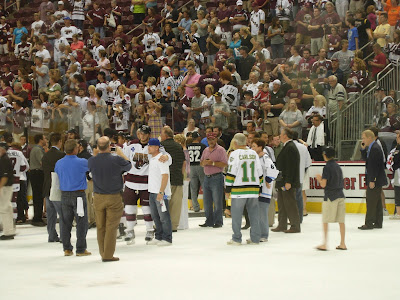 Congratulations to the Hershey Bears, the 2009-2010 Calder Cup Champions.
Posted by The Peerless at 2:33 AM 1 comment: