It wasn’t an end-to-end rush, it wasn’t a one-timer off a cross-ice feed, it wasn’t a wrister from the top of the circle.

It was a grinder’s goal, a garbage goal, a goal that might have saved the Caps’ season.

Alexander Ovechkin reached a milestone not achieved in 12 years on a rebound of a Mike Green shot from the point, part of a furious four-goal comeback in the last 8:30 of the game in a 5-3 win over the Atlanta Thrashers.

The game has changed, most notably in goal, where bigger, more athletic goaltenders, wearing lighter equipment, and employing a style – the butterfly – that eliminates the lower half the net for the most part, offer shooters little of the net at which to shoot. Add skaters more inclined to clogging shooting lanes with sticks and shin pads, and scoring goals has become harder than differential calculus…well, almost.

But there was Ovechkin, getting an ugly goal to hit the 60-mark when the Caps most needed it. It is not an overstatement to say it saved what is left of the Caps’ season. The Caps came out flat. Frankly, they played to the level of their hosts, which is to say…well, we won’t be seeing highlights of the first 15 minutes on any instructional video.

Ovechkin opened the scoring on a move he’s used more often this year, taking a pass from Nicklas Backstrom just inside the blue line, cutting across the zone to get the goalie moving. As he approached the edge of the right wing circle, he snapped a wrist shot through the pads of goalie Kari Lehtonen, and the Caps had a lead.

Then things, as they say, “took a turn.”

scored three consecutive goals – a passable impression of Mike Green by Tobias Enstrom as he pinched in down the middle and converted a feed from Mark Recchi, a shorthanded breakaway converted by Jim Slater, and Slater once more, while falling down, off a feed from Eric Perrin (who sprang Slater free earlier on the breakaway).

At 3-1, one had the feeling, “it was a nice run, boys…,” especially as the clock ticked under 10 minutes to play. But with the Caps furiously crashing the net, and Kari Lehtonen turning everything aside, the puck squirted out to Tom Poti at the left point. He moved the puck across to Mike Green on the right side, and Green fired. With Ovechkin leaping to avoid the puck, Lehtonen made another save, but the rebound came out to Ovechkin ten feet out. Ovechkin wasted no time snapping the puck into the net before Lehtonen could recover, and he had his 60th. The Caps had a heartbeat.

Then Nicklas Backstrom put a stamp of his own on the game. Green started from his own and skated out with the puck. With Thrashers backing up from his advance, he dropped the puck for Backstrom inside the Thrasher line. Backstrom took a couple of steps and fired from the left-wing dot, beating Lehtonen cleanly off the crossbar to tie the game. Barely half a minute later, from a faceoff in the Thrasher end, Ovechkin ended up with the puck behind the net. He found Backstrom at the doorstep for a tap-in, and the Caps had a lead. Boyd Gordon put the Thrashers out of their misery with an empty netter with eight seconds left for the final margin.

This could have been the ugliest one of all. It is one thing to get spanked by a club honoring a hometown hall of famer and playing with a lot of energy, as was the case in the 5-0 loss to on Wednesday. It is quite another to lose to a club playing out the string and not playing particularly well in the game in question. wasn’t making anyone forget the 1978 Canadiens with their play in the first 40 minutes, but they had a 3-1 lead.

The Caps awakened in the third, looking more like the desperate team that should have taken the ice to open the game. They put relentless pressure on , but Kari Lehtonen then stepped up for . Lehtonen stopped 15 shots in the space of 11:28 to open the final frame. The Caps scored, though, on their 16th shot of the period – Ovechkin’s 60th goal – to close to within one. It was on their 21st shot of the period that they finally took the lead. All in all, the Caps would outshoot the Thrashers 23-2 in that third period. had only 18 shots for the entire game.

The ice was certainly tilted toward Lehtonen last night. The Caps launched 65 shot attempts at the goalie (45 making their way through). could muster only 30 (18 getting through to Caps goalie Cristobal Huet). And it was the big guys firing…Ovechkin had 16 attempts, nine shots on goal…Viktor Kozlov had 10 and 8…Mike Green 9 and 7.

Conversely, the second line of Alexander Semin, Sergei Fedorov, and Tomas Fleischmann (which was broken up for much of the third period) was 0-0-0, -5, with only four of the 45 shots. Eric Fehr, who joined that line in the third, had four shots by himself.

Ovechkin might have had another hat trick in this game…Lehtonen made an excellent blocker save on a one-timer from Ovechkin with just under two minutes to go in the first.

You know…for as little time as he’s played this year, Steve Eminger has played pretty decently. He did so again last night in a little less than 13 minutes…no Thrasher goals scored on his watch, and he chipped in a couple of shots and hits, to boot.

One has to feel a certain amount of sympathy for Kari Lehtonen. He was scrambling all over the ice to keep pucks out of the net, but the Thrashers – as defensively challenged a team as there is in the NHL this season – gave him no help. He was at the mercy of Capitals shooters in the third, a one man barricade. That is not a recipe for holding a lead. How bad was it?...the Caps wouldn't get this kind of shot spread in a practice against air... 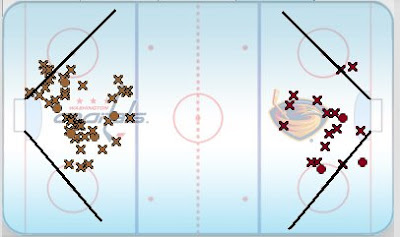 Watching Mark Recchi tonight, one couldn’t help but think, “call it a career.” He’s been a fine player – certainly one we wished wore the Capitals’ colors at some point in his career – but the time has come. The mind is willing, but the body just isn’t keeping up.

Even Bobby Holik – who owned the Caps in the circle in Philips Arena this year – couldn’t muster better than 45 percent on draws. But he did have the line of the night...

"We've been having a hard time, pretty much the whole year, putting 60-minute games together. At least that's one thing we're consistent with; we can't play a 60-minute game."

Tobias Enstrom – the dark-horse rookie of the year darling of a lot of “knowledgable” hockey observers – was -3 and on the ice for each of the third period goals (Boris Valabik feels his pain). He is now -13 in his last 17 games.

As much grief as Jeff Schultz gets for not playing as big as he is, he was on the ice for almost 21 minutes, had three hits, was +1, and was not on the ice for any Thrasher goals. He’s quietly put together a pretty good season: 5-11-16, +7 (he leads all Caps defensemen in that plus-minus number) in more than 18 minutes a night.

We’re down to three “home-and-homes”…, , and . The Caps are one point behind for eighth, two behind for seventh, although both have games in hand. The Caps have better records than both over their last ten games.

So, even though intra-division play is the order of the day to close the NHL season, the Caps will be tempted to keep one eye on the scoreboard over these last two weeks of the regular season. But for now, the Caps can only sit and watch, as they do not play until Tuesday, in . Both the Bruins and Flyers can put a bit more distance between themselves and the Caps in the meantime, each with one game on the schedule. And and are still lurking, one and three points behind , respectively, but with games in hand.

Much as it pains us to say it, it’s starting to look a bit like the end of a NASCAR race, with five cars heading into the final lap ready to draft one another. When they reach the finish line, we’re still expecting the car with the “weagle” on the hood to get the checkered flag.