The Peerless Prognosticator is ON THE AIR!!! -- Game 40: Devils at Capitals, December 30th

The Washington Capitals wrap up the 2017 portion of their 2017-2018 season on Saturday night when they host the New Jersey Devils at Capital One Arena in a…wait for it…METRO MATCHUP!!!

This “Metro Matchup” has meaning, to the extent the 40th game of an 82-game season has meaning.  The Caps and the Devils, each being a surprise team of sorts at this stage of the season, went into Thursday’s games tied in standings points at the top of the division (New Jersey hosts the Buffalo Sabres on Friday night).

While the Caps are a surprise in that most observers thought they might take a step or two backward this season after last year’s second consecutive Presidents Trophy season, the Devils are a surprise in being this successful this soon after four straight seasons out of the playoff mix and finishing with just 28 wins last season and at the bottom of the Metro.

The Devils went into Friday’s game against Buffalo with a five-game winning streak and points in seven straight contests (6-0-1).  Since starting that seven-game points streak on December 12th, only the Boston Bruins have more standings points earned (14) than the Devils (13, tied with Vegas), but they did it in nine games played (6-1-2).

The Devils might not have the top end skill that some teams have, but they make it up by spreading things around.  And that has been the case in their seven-game points run.  Fifteen different players have goals in the seven games, while 18 different skaters have points.  One of those players is leading overall scorer Taylor Hall, who is 3-4-7 in the seven-game run despite missing a pair of games with a bruised knee suffered in a 5-1 win over the Los Angeles Kings to start the streak, a game in which Hall scored a pair of goals, including the game-winner.  Hall has had an assortment of injuries over his eight-year career, a problem that has allowed him to dress for all of a season’s games only once, when he appeared in 82 games for the Edmonton Oilers in 2015-2016.  It might explain in part his inability to reach the lofty levels of performance one might have expected of a first overall draft pick (in 2010 by Edmonton).  Hall has never had a 30-goal season, although he has averaged almost 28 goals per 82 games over the course of his career.  Keeping him in the lineup and productive matters to the Devils, who are 17-3-1 in the 21 games he has registered a point this season.  In nine career games against the Caps, Hall is 2-1-3, minus-3.

Will Butcher leads the defense in points in the seven-game points streak (0-4-4) and in overall scoring this season (2-21-23).  Through Thursday’s games those 23 points were tied for the lead among rookie defensemen in the league with Tampa Bay’s Mikhail Sergachev.  Butcher might be seen as something of an overachiever, having been a fifth-round draft pick (123rd overall) of the Colorado Avalanche in the 2013 entry draft.  After being drafted by the Avs, he matriculated to the University of Denver, where the achievements started being realized.  He would win honors as a National Collegiate Hockey Conference all-star, player of the year, and offensive defenseman of the year (all in 2016-2017).  He also won the Hobey Baker Award as the nation’s top collegiate player in men’s hockey and won a national championship with the Pioneers.  He started hot with nine points (all assists) in his first six games, and while he slowed a bit, he does have five points in eight games (again, all assists) through Thursday. As for the goals, both of them on his ledger were scored on the road.  He had an assist in his only previous appearance against Washington, a 5-2 Caps win back on October 13th.

In the backup role and perhaps taking the back half of the back-to-back, Keith Kinkaid has struggled.  After a decent 2016-2017 season in which he posted a 2.64 goals against average and a .916 save percentage, his numbers have deteriorated quite a bit this season.  In ten appearances, he is 5-3-1, but his goals against is more than three-quarters of a goal higher than last season (3.48), while his save percentage has dropped to .893.  He has not seen action since December 9th when he allowed five goals on 39 shots in a 5-2 loss to the New York Rangers.  In four career appearances against Washington, Kinkaid is 1-3-0, 4.23, .867. 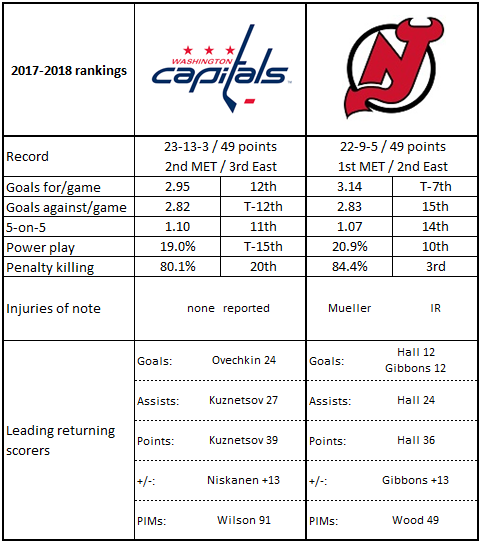 1.  Only Carolina and Columbus have settled games in extra time more often (12 times apiece) than the Devils (11 times).  New Jersey is 6-5 in such games.

2.  New Jersey does well in close games.  Only Pittsburgh and Vegas have more one-goal wins (12 apiece) than the Devils (11).  Only Winnipeg has lost fewer one-goal games in regulation (none) than has New Jersey (once).

3.  The Devils do not wither late.  They have allowed only 28 third period goals this season, third-fewest in the league (San Jose: 21; Los Angeles: 23).

4.  New Jersey does not often out-shoot opponents, but when they do, they scoop up points.  They outshot their opponents only ten times through 36 games (through Thursday night).  Only Anaheim has outshot opponents less frequently (eight times), but the Devils are 6-1-3 in their ten games.

1.  The Caps are still struggling with possession numbers.  They rank in the bottom ten in shot attempts-for percentage overall (48.32/22nd), tied situations (45.80/29th), and close situations (47.87).  The frustrating thing here that points to a lack of focus or energy is that they rank tenth in the league when behind in games (54.96).

2.  The Gimmick win over Boston on Thursday was the Caps’ third this season.  Only Columbus has more (four).

3.  One of the ways to look at how unique Alex Ovechkin’s career has been is to look at who might be on the horizon to even come close to his goal-scoring totals.  Is there anyone on the horizon, say under the age of 30, who might make a dent in the gap between themselves and Ovechkin?  Of players under 30 in the league, only two – Steven Stamkos and Patrick Kane – have cleared the 300 goal mark (Stamkos has 336 as he approaches his 28th birthday; Kane has 300 having just turned 29 in November).  By the time Ovechkin reached his 30th birthday, just before the start of the 2015-2016 season, he had 475 goals.  It will be a while before we speak of anyone else with a shot at 600 career goals.

4.  When Braden Holtby took the ice against Boston on Thursday night, it was his 336th appearance in the NHL, tying him with Mike Karakas for 137th place on the all-time list of appearances for goalies.  And here is where we veer off a bit.  Karakas played for the Chicago Blackhawks and the Montreal Canadiens in the 1930’s and 1940’s.  The odd thing about his career was that he was once suspended for refusing an assignment to the AHL.  That suspension was lifted by NHL President Frank Calder, upon which he was loaned to Montreal after their goalie was injured. He went 0-4-1 in five games.  Maybe his heart wasn’t in it, although to be fair, the Canadiens were awful (10-33-5, seventh in a seven-team league).  Then again, he once played in a Stanley Cup final wearing a steel-toed boot to protect a broken toe.  He, with a 1.71 goals against average for the playoffs, and the Blackhawks won the Cup (1938).  Next up for Holtby on the games played list is former Capital Clint Malarchuk (338).

5.  Like that comeback on Thursday?  It was the Caps’ fourth win this season when trailing after the first period.  Only three teams have more such wins (San Jose: 6; Los Angeles: 5; Vegas: 5). That’s the good news.  The bad is that they have trailed at the first intermission 12 times this season.  That they are tied for sixth in winning percentage in such games (.333) speaks to just how tough it is to come back in this league when falling behind.

There are some things that just transcend team loyalty.  Rooting for a player who toils on even after being diagnosed with chronic myelogenous leukemia (a condition treatable with medication) is high on that list.  Boyle’s would be an interesting story without the medical angle, though.  A first round pick of the Los Angeles Kings in 2003, he seemed to be a pick for a different era.  A player of considerable size (6’6”/245) and physical presence, he seemed to have at least the body type for the pre-2004-2005 lockout style of clutch and grab, one that put a premium on being physical.  He did not seem to be especially well-suited for the post-lockout style, especially in recent seasons, of speed and elusiveness.  However, Boyle has carved out a respectable career with five teams and 650 games filling a bottom six forward role and chipping in the timely goal (21 of his 103 career goals are game-winners).  He has been especially effective for the Devils, potting ten goals on 44 shots (22.7 shooting percentage) in 26 games of work (he missed the Devils’ first ten games this season).  He is also the leading scorer in the seven-game points streak for New Jersey (5-4-9, plus-6).  Boyle is 8-6-14, plus-5, in 29 career games against the Caps.

Social media was abuzz on Thursday asking, to boil it down, “what’s up with Oshie?”  His game against the Bruins was not of the sort one puts in their personal scrapbook, and with five games played since he returned from a concussion (his fourth documented instance), games in which he is 1-0-1, minus-3, the question has some merit.  Every player goes through slumps and dry stretches, but coming off an injury such as his, there is concern, at least among a segment of the fan base, that perhaps he came back a game or two early or is otherwise not quite right just yet.  His dry spell with respect to goal scoring has extended to a dozen games over which he has a single goal, although he was more of his rambunctious self in the Gimmick win over Boston in which he had six shots on goal, almost the total he had in the first four games since his return (eight).  The goal scoring matters; the team is 5-1-2 in the eight games in which Oshie had goals this season.  The odd thing about his game log this season is the team’s lack of success in games in which he logs high minutes (perhaps a function of having to play top-six forwards more in losing situations).  The Caps are 8-9-2 in games in which Oshie logged more than 19 minutes.  He is 4-3-7, even, in 11 career games against the Devils.

While this game has meaning in the standings, the value might be more symbolic value than actual.  Yes, it could propel the Caps into the lead in the Metropolitan Division (depending on the Devils’ standing after Friday night’s game against Buffalo), and it would be something of a statement game against an upstart rival.  It also would have some historical meaning.  A win would give the Caps 24 wins at calendar year end, tied for third-most in team history (25 in 1991-1992 and 28 wins in 2015-2016); a standings point would give the Caps their fifth season in franchise history with at least 50 points by calendar year end of a season.  But it represents the end of the beginning, the last of the 2017 portion of the season.  The Caps started 2017 with a win, a 2-1 victory over the Ottawa Senators on New Year’s Day.  A win would be a nice way to end the year.