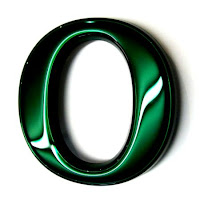 Hockey is a team sport.  That point was driven home on Tuesday night as the Detroit Red Wings defeated Alex Ovechkin, 1-0, at Joe Louis Arena in Detroit.  As for the rest of the Washington Capitals, they were largely absent from the contest in which one harmless looking shot was the difference on the scoreboard.

That shot came from the stick of Andreas Athanasiou early in the third period, a shot taken off the rush from the goal line extended to goalie Braden Holtby’s right, a shot that somehow snuck between Holtby and the near post, a shot that might otherwise have been forgotten in the context of the game if the Caps had spent less time watching a teammate trying to set a record and more in tending to business.  It was enough for the Red Wings to post their first shutout since Opening Night and deny a Capital a record.

-- Ovechkin had more power play shots on goal in the third period (5) than any Capital had of any kind for the entire game.  Matt Niskanen had four shots on goal for second highest on the club.

-- The loss was the first for the Caps in Detroit in regulation time since they dropped a 3-2 decision on March 16, 2011.

-- This was the 41st game in his career that Ovechkin recorded ten or more shots.  That is, by far, the most in the league since he arrived in 2005-2006.  Next highest is Eric Staal – nine occurrences.  In fact, Ovechkin has more ten-or-more shot games than the next seven players on the list.  They total 39 occurrences.

-- The odd thing about Ovechkin’s 15 shots on goal?  None of them came in the second period.

-- That was the first time in the series between the clubs that the Red Wings defeated the Caps by a 1-0 score at home.  They beat Washington, 1-0, on November 17, 1987, in Landover, MD.  The author of that shutout for Detroit was former Caps coach Glen Hanlon.

-- Brooks Orpik skated one shift in the second period.  He went out with a lower body injury.  It is probably worth noting that over the last two periods, Nate Schmidt filled in to skate a total of 12:21 in ice time.

-- Changing of the guard in Detroit?  The shots on goal leaders with four apiece were Dylan Larkin and Tomas Tatar.  Yeah, combined they didn’t have as many shots on goal as Ovechkin had in the third period (9).

Two words come to mind after watching this game… “move on.”  The Caps tried to get the record for most goals scored by a Russian-born player for Alex Ovechkin and didn’t.  Move on.  It was a severely lopsided attack for the Caps who didn’t bring the level of effort that Ovechkin did, and when they did, it seemed to be in trying to get Ovechkin that goal.  It made one mistake by Holtby look a whole lot bigger than it needed to be in an otherwise pretty good performance by the netminder.  Even the team defense looked pretty good, holding Detroit's leading goal scorer Gustav Nyquist without a shot on goal and doing the same to former teammate Mike Green.  It was one of those nights that could have been special, wasn’t, and now it’s time to set that aside and move on.

Induction of the NHL's Magnificent Seven

The last thing we saw before passing out in a food coma from our occasional indulgence of pepperoni, anchovy, and marshmallow fluff pizza last night was a picture on NHL.com of this year's Hockey Hall of Fame induction class.  And as so often happens when we indulge in a PA&MF pizza, we had a very active dream state.  We could not help but conjure images of which inductees would be which characters from the iconic film... 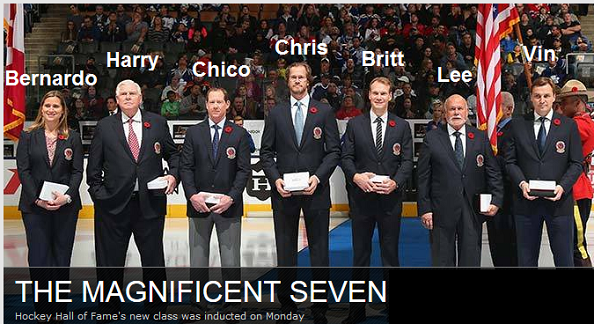 As for the characters...

“Chris,” the veteran gunslinger, fearless and a born leader.  Well, that has to be Chris Pronger.

There is the skilled, but inexperienced “Chico,” and while Phil Housley certainly did not lack for long experience in his NHL career, he spent a lot of it looking like a kid.

There is “Vin,” a well-traveled sort who cannot accept being mundane. Sergei Fedorov, one of the early entries from Russia in the NHL, had a style and skill level that was anything but mundane.

“Bernardo” worked in comparative obscurity before being recognized for his skill.  This might fit Angela Ruggiero, who excelled in the formative years of U.S. women’s hockey, medaling in four consecutive Winter Olympics and being a member of four world championship teams.

There is “Britt,” who does not shrink from a challenge and who has a variety of skills.  Not unlike Nicklas Lidstrom, arguably the most complete defenseman in the modern era of hockey.

“Lee” had to face down a crisis of confidence, not all that different from someone like Peter Karmanos confronting the challenge of growing a successful hockey franchise is a non-traditional part of the world known more for barbecue and auto racing.

And there is “Harry,” joining the adventure to seek treasure and fame, and well, Bill Hay spent 15 years as chairman and chief executive officer of the Hockey Hall of Fame, a jewel in the hockey firmament.

And you know that Gary Bettman is "Calvera."