You’d think, anyway. It is the day before the unrestricted free agency signing period begins, and all across North America hockey fans will go to sleep to dream of sugar daddy GM’s stuffing their approved NHL-logo stockings with free agent goodies.

You’d be better off wishing for coal.

Below we show you a table of all the NHL players who earned at least $6,000,000 last year (salary, not cap hit, according to the NHL Players Association): 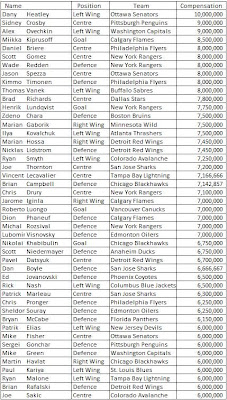 46 players earning an average of $7.1 million last year. Quite a collection of talent. A lot of them earned that money as a product of signing a contract as a free agent with a new team, lured away by the promise of riches and offering the promise of success for their new teams and their fans. That list of big-money players who were signed away by another team to get that paycheck looks like this: 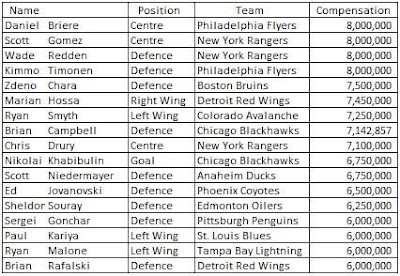 We interpret this pretty narrowly. These aren’t “trade and sign” guys, these are guys who were signed away to big contracts without intervening personnel actions. We've tried to weed those guys out. We're looking at the straight-up, sign the player away from another team sort of player. We are left with 17 players making an average of $7.0 million. Still a formidable lineup. But the object of the exercise is to win a Stanley Cup, and the object of the July exercise is to sign talent that will get a team to that goal. So, of this group, who has hoisted a Cup since signing their big deal?

Now we’re left with a very short list. Three players who earned an average of $6.3 million last year. But it gets better. Consider Sergei Gonchar and Brian Rafalski. Both are defensemen, both signed big contracts with new teams (Gonchar having been signed away from Boston in 2005, Rafalski from New Jersey in 2007). But both did so with teams -- the Pittsburgh Penguins and the Detroit Red Wings – that signed home-grown talent to larger deals before they won a Cup. Pittsburgh signed Sidney Crosby to a five-year, $43.5 million deal in 2007 (before winning a Cup in 2009), while Detroit signed Nicklas Lidstrom a two-year, $15.2 million deal in 2006 (before winning a Cup in 2008).

That leaves us with one big bucks free agent – Scott Niedermayer – who stands as the centerpiece of a Stanley Cup champion, the 2007 Anaheim Ducks. But even here, the conclusion isn’t all together cut and dried. Jean-Sebastien Giguere was signed to a big deal (at the time) after the 2002-2003 season (Giguere isn’t “home grown, either, having been drafted by Hartford in 1995, but he had been with the Ducks for three years before his big payday).

Here is the point. Unrestricted free agent – at least at the top end of the pay scale – is the single most overrated aspect of personnel management and talent acquisition. The Stanley Cup being a rare commodity – there is only one champion crowned a year – we would expect that there would be a lot of failure if winning the Cup is the criterion for free agent signing success. But to have this many players – 17 – signed away to big contracts and one Cup to show for it (unless you count teams that also signed home-grown talent) begs the question, is all this hype over the next big signing worth it?

But hey, what other entertainment will a hockey fan have in the first week of July?
Posted by The Peerless at 8:29 AM 3 comments: