Down the Home Stretch: March 27 Update

After last night's games, here is how the three wild-card contestants in the Eastern Conference find themselves... 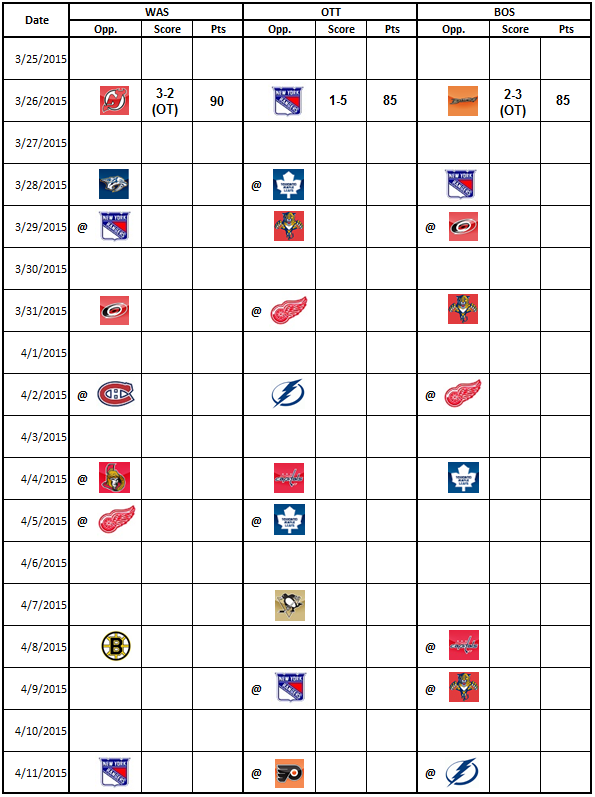 The Washington Capitals shook off the rust of having had four days off from game action just in time to escape their contest against the New Jersey Devils with a 3-2 overtime win on Thursday night.  Matt Niskanen did the honors for the Caps, firing a slap shot from the left point that was redirected off a Devils player and over the glove of goalie Cory Schneider 1:13 into the extra period (NOTE: the goal has been awarded to Evgeny Kuznetsov, who redirected the Niskanen shot).

The game up to that point was a close affair, closer than one might have imagined it would be early on.  Karl Alzner got the Caps off and running less than three minutes into the game.  The scoring play started when Marcus Johansson walked the puck around the top of the zone to the top of the offensive zone before backhanding a pass to Niskanen at the right point.  Niskanen reversed the flow and sent the puck to Alzner at the left point.  With the Devils defense having shifted en masse to the right side of the ice, Alzner had room to step up and let fly with a shot from the left wing circle that beat Schneider cleanly over his right pad on the short side.

That would be all for the first period scoring, but Washington got on the board with another early goal in the second period.  In the second minute of the period the Devils were having difficulty clearing the puck from the own zone.  Eric Gelinas tried to clear the puck from  the crease by shooting it off the side boards but managed only to put the puck on the stick of Eric Fehr at the right point.  Fehr sent the puck right back at the New Jersey net and off the post past a startled Schneider to make it 2-0 just 1:35 into the period.

The Caps let the Devils back into the game late in the second period when, on a power play, they allowed the Devils to break cleanly out of the defensive zone.  Patrick Elias skated into the Caps’ zone, pulled up, and fired a shot that goalie Braden Holtby stopped with his right pad.  Travis Zajac followed up on the play and batted the rebound through Holtby’s pads for the shorthanded goal, halving the Caps’ lead to 2-1.

That might have been all the scoring, but the Devils had one more strike left in them.  In the last minute and their goalie pulled, the Devils worked the puck behind the Caps’ net.  Scott Gomez found a passing lane from the end wall to Steve Bernier standing at the edge of the blue paint just off the post to Holtby’s left.  Bernier slammed the pass from Gomez past Holtby’s left pad before the goalie could get across, and the game was tied, 2-2, with just 29.2 seconds left in regulation time.  That left it up to the Caps, and Niskanen (uh...Kuznetsov), to end the game 73 seconds into the extra period to give the Caps the extra standings point in the 3-2 win.

-- The overtime goal was the 13th 4-on-4 goal scored by the Caps this season (second in this game), tied for second-most in the league.  The Caps have out-scored opponents by a 13-2 margin at 4-on-4.

-- After recording six game-winning goals for the Pittsburgh Penguins last season, Matt Niskanen recorded his first game-winner as a Capital.

-- It was a Devils sort of game with shots and chances at a minimum.  The teams combined for fewer than 100 attempts, the Devils finishing with 50 and the Caps with 47.

-- In addition to his game-winning goal, Niskanen added an assist, giving him two multi-point games in his last four contests (1-4-5).

-- Maybe it was an odd night, or perhaps the official scorer was a bit too focused on one statistic, but the Caps were charged with 16 giveaways to the Devils’ seven.  John Carlson was nicked for four, Matt Niskanen for three.

-- Braden Holtby has found himself in a rhythm of late.  This was the third straight game in which he allowed two goals.  In his last 12 appearances he is 7-5-0, 2.08, .931, with one shutout.  Three of those five losses came in games in which he allowed, yes, two goals.

On the one hand, a win is nice, especially when Ottawa lost in regulation, and Boston lost in extra time.  The Caps now have a five-point lead on both clubs with eight games left to play.  And it was their fourth win in five games.  On the other hand, getting out to a two-goal lead, then allowing a shorthanded goal off a sloppy line change and a goal in the last half minute to tie the game…really?  The adjectives head coach Barry Trotz used after the game – “poor”…”lucky”…”average (at best)” – were apt.  As he put it, “I know I wasn't happy with that game, and I know they shouldn't be.  If they are, then we’re fooling ourselves. We didn't play very well.”

No, no one should be happy, and no one should fool themselves that the Caps were anything but fortunate to play that sloppily against a team that can’t score and has little but pride to play for, and yet still come out with a win.   They will be tested more severely when Nashville comes to town on Saturday and again when they head to New York to face the Rangers on Sunday.  They need to get back into a playoff mind set, or playoffs might be something they watch instead of something in which they participate.

Posted by The Peerless at 6:24 AM No comments: