The Peerless Prognosticator is ON THE AIR!!! -- Game 81: Panthers at Capitals, April 5th

Two games. Win, and you’re in. The Caps have two or more wins in a row nine times this season, so it is not like they are entirely unfamiliar with the concept. But these two games, starting Thursday night against the Florida Panthers, are for the playoffs. There should be no scoreboard watching; that is the sort of thing the team trying to catch up needs to do. No, the Caps full and undivided attention should be paid to the Panthers, a team that can yet be overtaken for first place in the Southeast Division and a third-seed to open the playoffs.

If there is a poster child of the post-lockout NHL, the Panthers are it. This is a team that has 18 standings points in losses. No team has as many standings points in games lost, and no team has played in more extra time games (25). Only Minnesota (19) has played in more trick shot competitions than the Panthers (17). Seven of their last ten games have gone to extra time, and their record is 2-5 in those games. Still, those are nine standings points earned in extra time games, five of those games going to The Gimmick. Florida is 12th in the East and 23rd in the league in wins in regulation and overtime, by far worst among playoff eligible teams in the East (New Jersey has the next fewest with 34) and two fewer than the playoff-eligible team in either conference (San Jose: 33).

And it is not as if the Panthers are even especially adept in the Gimmick. They have the fifth worst shooting percentage in the league in trick shots (22.4 percent on 13-for-58 shooting). It is just that they get so many opportunities. Those 58 shots in the freestyle competition are only one fewer than Minnesota. On the other side of the equation, their goaltenders have only a combined .633 save percentage in the Gimmick, 17th in the league. Florida benefits from doing a volume business in the tie-breaker.

In terms of recent play, Florida has lost seven of their last eight games. But their record is 1-2-5. Despite seven losses, they have points earned in five of them. In three of those games they had to score a tying goal in the third period to force extra time. In those eight games the Panthers have struggled on special teams, going 3-for-30 (10.0 percent) on the power play and 16-for-21 (76.2) killing penalties.

Here is how the Panthers and Caps compare this season: 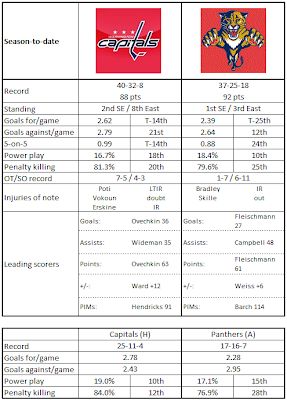 2. Florida’s whole game plan seems to be to escape regulation play without a loss. Only one team has fewer losses by one goal in regulation than the five games Florida has lost in that fashion (Tampa Bay). It seems to be a case of hanging on for dear life as much as anything. Only two teams have a worse winning percentage when leading after two periods than Florida. They are right there with the Islanders for the most extra time losses (eight) when leading after 40 minutes.

4. Erik Karlsson, Shea Weber, and… Jason Garrison? Those are the top-three goal scorers among defensemen this season. Garrison’s 16 goals is a team record for defensemen. He has not had one on the road, though, since February 28th, the game-winning goal in a 5-3 win over Toronto.

5. The Panthers have used three goaltenders in the five games between the teams this season – Jacob Markstrom, Scott Clemmensen, and Jose Theodore. Clemmensen has both Panther wins (2-1-0) but has a 3.33 goals against average and a .881 save percentage. Jose Theodore stopped 39 of 41 shots in his only appearance against the Caps this season, a 2-1 loss to the Caps on February 17th.

2. Sixteen different Caps have points in the season series against the Panthers this season. Alex Ovechkin and Jason Chimera lead in goals with three apiece. Chimera, Alexander Semin, and John Carlson lead in points with five apiece.

3. Only four teams have fewer goals at 5-on-4 than the Caps, which only makes sense since there are only three teams having received fewer power plays than Washington. The Caps are 8-for-68 on the power play over their last 26 games (11.8 percent).

4. Since winning four in a row in early March, the Caps are 4-4-2. In those ten games the Caps have scored more than three goals once, a 5-3 win in Detroit on March 19th.

The former Capital has career highs in goals (27), assists (34), and points. He also is tied for a career-worst minus-7. Of more recent relevance, Fleischmann has five goals in his last eight games, all of them in losses (part of the pain of losing seven of eight games). He is 1-3-4 in six games against the Caps for his career, all of his scoring recorded this season in five games against the Caps.

Don’t look now, bu John Carlson is a “last pager.” If you look up the plus/minus tables on NHL.cam, there he is on Page 10, the last page of defensemen. His minus-16 ranks in a tie for 277th among 294 defensemen, only 14 defensemen having worse marks. Only two defensemen have been on ice for more goals than the 103 he has seen up close, and he is one of only four who have been on ice for more than 100 goals against. He has had three “plus” games out of 16 contests since March 1st.

1. Get out of the gate. Washington and Florida rank 26th and 27th, respectively, in first period goals scored. If the Caps can play against type and get out quickly, all the better.

3. Play…your…game. The Caps get in trouble when they get cute or try to do things individually. Meanwhile, the Panthers are on the other side without a 30-goal scorer, with one 60-point player, only one player better than a plus-5, no one shooting lights out (top shooting percentage is 13.1 percent). But they are the ones on top. If the Caps play more of that kind of balanced, play to their system style, this game should not be close.

In the end, it is all about the numbers. “60” cannot be “65.” If this game goes past 60 minutes, the Panthers are Southeast Division champions. “Two” cannot become “one,” or even worse, “zero.” If the Caps do not get two points out of this game, their playoff chances are in jeopardy, even if Buffalo loses in Philadelphia tonight. Think of it this way. These are supposed to be “playoff” type games for the Caps. Well, with two games left in the regular season, this is like a “Game 6” of a seven-game series. Do you know what the Caps’ record is in Game 7’s when losing Game 6?

This has become their “must win” game.