"Child prodigy is a curse because you've got all those terrible possibilities.”
-- Itzhak Perlman

When Vrana scored goals in each of his first two games and nine in his first 16 contests, topping off that run with a hat trick against the Calgary Flames on November 3rd, it looked as if it was possible he would blow right through the 30-goal mark and challenge the 40-goal total for the season.  Even through 31 games he had 15 goals, almost a half a goal per game pace.  But there was the start of some erosion in his goal scoring – six goals in 15 games after his nine in 16 games start.  When he suffered a ten-game goal drought from December 9th through New Year’s Eve, it was a signal of things to come.

Vrana rebounded to score eight goals in a nine-game stretch ending on January 27th, but after that the bottom fell out of his goal scoring.  He finished the season with two goals in his last 19 games.  He finished the season with a career-high 25 goals, but after his torrid start that total seemed a bit disappointing, even in an abbreviated season. 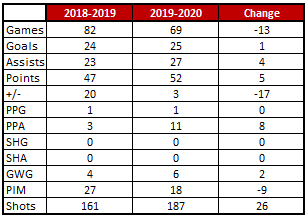 When secondary scorers score – bottom six forwards or third pair defensemen – it is often an indicator of team success.  Jakub Vrana is that goal scorer in a top-six role whose goal scoring is itself an indicator of Caps success; at least it was in 2019-2020.  In the 20 games win which he recorded a goal, the Caps were 16-2-2.  The odd part was that assists mattered almost as much.  Washington was 17-4-3 in games in which Vrana recorded at least one helper.  If he was scoring, the Caps were winning.

Game to Remember… November 3, 2019.  When the Calgary Flames came to town on November 3rd, the Caps were in the midst of a nice run – 7-0-1 in their previous eight games.  They did it with offensive firepower, averaging 4.63 goals per game over that span.  Jakub Vrana had a hand in seven of the 37 goals, four goals of his own and three assists.  It set the stage for a big night for the Vrana scrapbook.  After Andrew Mangiapane opened the scoring with a Calgary goal in the sixth minute of the game, Vrana got the Caps even 11 minutes in.  It was a matter of quick defense-to-offense transition.  Tom Wilson fended off a defender to slide the puck out of the Caps’ end into the neutral zone where Evgeny Kuznetsov ran it down as it was crossing the Flames’ blue line.  As he collected the puck, he found Vrana breaking down the middle to the net all alone.  Vrana redirected the Kuznetsov pass over the right pad of goalie Cam Talbot to tie the game at the 11:01 mark.

Four minutes later, Vrana gave the Caps the lead.  Calgary paid for not being able to clear the puck out of their own, a clearing attempt intercepted by Dmitry Orlov at the blue line.  Orlov skated to the middle and left the puck for Kuznetsov cutting into the left wing circle.  Kuznetsov dropped the puck for Vrana, who snapped it short side past Talbot to make it 2-1, Caps, 15:08 into the period.

After Elias Lindholm tied the game for Calgary with two seconds left in the first period, the teams went almost the entire second period with the score deadlocked.  Vrana broke the tie in the 16th minute.  The Flames were putting pressure on the Caps until a loose puck lay between the hashmarks in the defensive end.  Kuznetsov chipped the puck up the middle where it found Vrana breaking behind the Flames’ defense.  Taking control of the puck just inside the Calgary blue line, Vrana broke in alone on Talbot a snapped a shot that Talbot stopped, but did not control.  Vrana got another poke at the puck and pushed it under Talbot to make it 3-2 and complete his first career hat trick.  It was also the game-winning goal in the Caps’ 4-2 win.

Game to Forget… October 8, 2019.  Jakub Vrana opened the 2019-2020 season with points in each of his first three games, two goals and an assist.  That modest streak came to a screeching halt when the Dallas Stars came to town.  It was a generally quiet night for Vrana on a night when the Caps could have used some timely scoring.  The teams exchanged goals over the first 48 minutes before the Stars took their first lead of the game 12 minutes into the third period.  The Caps tied the game with less than 30 seconds left on a Nicklas Backstrom goal to salvage a point in what would be a 4-3 overtime loss on a Tyler Seguin goal 43 seconds into the extra frame.  Vrana’s score sheet line was largely blank.  No points, no shots on goal (one of four games without a shot for his season), minus-1, and less than 14 minutes in ice time.

Jakub Vrana opened the scoring for the Caps in their 4-3 Stanley Cup clinching effort in Game 5 of the final in 2018.  In 15 postseason games since, Vrana does not have a point.  He is 0-for-25 shooting in that span and carries a minus-8 rating.  That streak includes a 2020 postseason scoring line of 0-0-0, minus-7, and 17 shots on goal in eight games while averaging 14:20 in ice time per game.  He had 11 shots on goal in the last four games of the opening round loss to the New York Islanders, but to no avail. That run of bad luck included a golden chance to get the Caps back into the series against the Islanders in overtime in Game 3.  He was foiled on two shots on the same breakaway by goalie Semyon Varlamov, and less than 30 seconds later, the islanders won the game and took a strangle hold in the series.

Next season, Jakub Vrana will be skating under the final year of his current two-year/$6.7 million contract, after which he will be an arbitration-eligible restricted free agent.  One has to imagine re-signing him will be a priority, given that there is no player with his mix of skills in the developmental pipeline.  He represents one of that “next wave” of players (which might also include Tom Wilson) that will have to produce to extend the Caps’ competitive window.

Jakub Vrana might have the most effective combination of speed, shooting, and finishing skills since Alexander Semin played for the Caps in his prime a decade ago.  But like Semin, there is an enigmatic quality to his game.  What accounts for the drop off in production late in the last two seasons?  How that question gets answered and addressed will mean a lot to Vrana’s pocketbook and to the Caps postseason fortunes over the next year.