It was one of those plays on which a player knows his place.  The Caps had just taken a 2-1 lead over the Oilers ten minutes into the second period when they worked the puck in the Oiler zone three minutes later.  Nicklas Backstrom and Alex Ovechkin combined to work the puck off the wall in the left wing corner, nudging it out to the top of the left wing circle.  Marcus Johansson cocked his stick as if to attempt a one-timer, but yielded to Ovechkin coming off the wall.

Ovechkin curled around Johansson and fired a shot that went wide.  Johansson, who filled in on the weak side as Ovechkin circled to the middle for his shot, continued around the net to put himself in position to collect the errant shot.  Johansson followed along the wall until he had a passing lane to Ovechkin.  His pass was one-timed past goalie Jason LaBarbera to give the Caps a 3-1 lead.  It was the game-winning goal and Johansson’s 100th NHL point.

The Panthers had just tied their contest with the Caps at a goal apiece eight minutes into the second period.  But just 36 seconds later the Capitals got the lead back.  It started when the Caps pressured Scott Gomez into giving up the puck in the offensive end.  Michael Latta scooped it up and turned up ice.  Latta carried it all the way into the Florida end where, from the left wing, he spotted John Carlson cruising down the middle.  Latta slid the puck across, and Carlson wristed it over goalie Scott Clemmensen’s blocker to restore the Caps’ lead, record his first goal of the season, and mark the ledger with his 100th NHL point.

It was a lead the Caps could not hold. Tomas Fleischmann scored on a power play with less than three minutes left in regulation time to tie the game.  The Caps, however, made good on all three attempts in the freestyle portion of the contest, and they had the second of what would be a four-game winning streak to open November.

The Caps and Islanders spent the first 25 minutes going back and forth.  The Isles opened the scoring in the first period, then the Caps hit for a pair 75 seconds apart early in the second period.  The Islanders tied the game just 17 seconds after the Caps’ second goal, and it looked as if this would be a high scoring game.  It would be, but not for both teams.  Marcus Johansson gave the Caps the lead 6:50 into the second period, setting up the critical moment.

Tom Wilson started it by skating the puck out of his own end up the left wing.  At his own blue line he backhanded a cross-ice pass to Steve Oleksy, who carried it down the right side.  When Oleksy gained the offensive zone he passed the puck back to Wilson heading for the net.  Wilson received the puck but was hooked off his skates by a diving John Tavares just as Wilson was going to shoot.  The puck followed the sliding Wilson, enabling him to fling the puck out from the seat of his pants through the legs of the Isles Josh Bailey and out to Alexander Urbom.  From the top of the left wing circle Urbom let fly with a slap shot that beat goalie Evgeni Nabokov for Urbom’s first goal with the Caps and Wilson’s first NHL point.

The game turned into a laugher from there, the Caps carrying a 5-2 lead into the third period.  With the clock ticking down to four minutes left the Caps had one more score left in them.  With Thomas Hickey in the box on a holding penalty, the Caps had a faceoff to Nabokov’s right.  Mikhail Grabovski would take the draw, Alex Ovechkin was at the top of the circle, and Tom Wilson was on the left wing hash marks.  Grabovski fought Casey Cizikas to a draw on the faceoff, allowing Ovechkin to step up and gather the puck.  Wilson circled out and around the faceoff circle and filled in the slot.  As Ovechkin inched down the wall he spied a lane to Wilson and used it.  Wilson redirected Ovechkin’s pass past Nabokov for his first NHL goal.  Wilson would complete the “Tom Wilson Hat Trick” with a ten-minute misconduct penalty with seven seconds left.  What a night… first point, first goal, first misconduct penalty.

If you are going to score a milestone goal, make it count.  That was the case when the Caps hosted the Columbus Blue Jackets in November.  The Jackets appeared to be in position to steal a game from the Caps, scoring two goals less than three minutes apart mid-way through the third period to take a 3-2 lead.  But the visitors didn’t have quite so firm a grip on that lead.

With less than two minutes left the Caps were pressuring the Columbus net.  Nate Schmidt fired a shot from the left wing circle that was deflected, but not past goalie Sergey Bobrovsky.  Joel Ward jumped on the loose puck and sent it back out to Schmidt.  From there it was out to Mike Green at the top of the zone, then over to Jason Chimera who fired.  His shot was stopped by the skate of defenseman James Wisniewski, but Wisniewski could not find the puck.  Mikhail Grabovski did.  He jumped in and roofed a shot over Bobrovsky’s left shoulder to tie the game with just 1:45 left.  It was Grabovski’s 100th NHL goal, and it sent the game to overtime where Alex Ovechkin would win it 94 seconds into the extra frame. 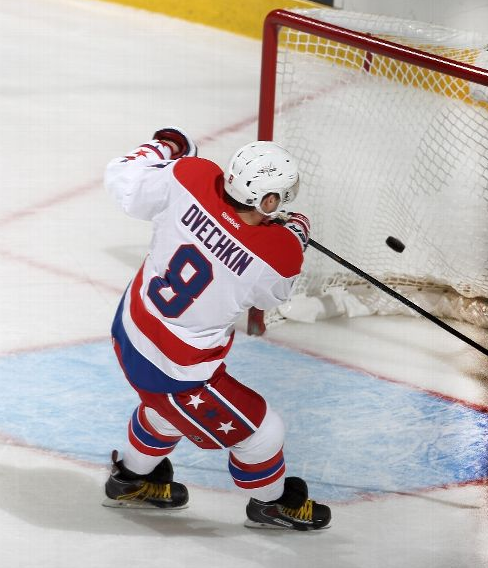 Mention the number “400” in Carolina, and chances are that thoughts turn to an upcoming NASCAR race.  In December, though, the number “400” had a hockey theme, and it would be shared by two Capitals.  For Mikhail Grabovski it was his 400th NHL game.  It would not be an especially memorable one in terms of his numbers (no points in 14 minutes), but for a teammate it would be a more memorable night on the ice, if in a bit of an odd way.

The Caps took a 3-2 lead against the Hurricanes into the third period.  Neither the Caps nor the Hurricanes could add to their totals in the first 19 minutes of the period, though.  Caps goalie Philipp Grubauer turned aside all 13 Carolina shots he saw over those 19 minutes, while Carolina netminder Cam Ward was a perfect 9-for-9 on Capitals’ shots.  In the 20th minute the Hurricanes pulled Ward for an extra attacker.  They managed to apply pressure in the Caps’ end with Eric Staal working the puck around the wall and out to Justin Faulk at the left point.  Faulk wristed a shot at the Washington net, but it was blocked in front by Martin Erat.  From the low slot in front of Grubauer, Erat flipped the puck out to Nicklas Backstrom at the blue line.  From there Backstrom threw the puck out into space in the neutral zone where Alex Ovechkin chased it down.  Shrugging off a diving attempt by Staal to interrupt his progress, Ovechkin skated in and scored the empty net insurance goal, his 400th NHL goal scored in the building in which he was drafted by the Capitals in 2004.  He became the sixth-fastest player in NHL history to score 400 goals, doing it in 634 games.  Only Wayne Gretzky (436), Mike Bossy (506), Mario Lemieux (508), Brett Hull (520) and Jari Kurri (608) were faster to 400.  It was the 22nd empty net goal of his career but the only one Ovechkin would have in the 2013-2014 season.

Posted by The Peerless at 6:13 PM No comments: