Just thought we'd point this out 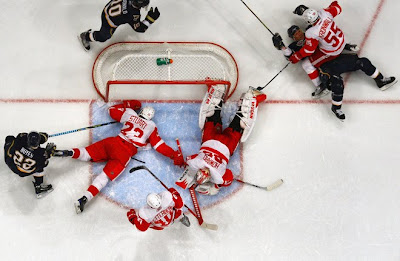 It's been 20 years since the Red Wings opened a regular season with two consecutive losses.
The last time a team won a Stanley Cup after losing their first two games?...

Only six Islanders were born when that happened (only ten Red Wings, for that matter).

Just a little bit o' history to brighten your day.
Posted by The Peerless at 1:19 PM 3 comments:

With 222 career goals as of this morning, Ovechkin sits tied for 316th all time on the NHL goal-scoring list. It might not sound like much, but he is one goal ahead of contemporary Marian Gaborik (T-320th, whose first season was in 2000-2001). He has a couple of Capitals connections he is about to pass. First up will be Benoit Hogue, with whom Ovechkin is tied, who finished his NHL playing career with the Caps, appearing in nine games. He had 222 goals in his career, none of which came in a Capitals uniform.

After that it will be Keith Acton (T-309th), who played in six games for the Capitals in his career, registering none of the 226 career goals he scored (the only team he played for among the six he dressed for on which he did not have a goal). Acton recently won $98,000 in a lottery and is an assistant coach for the Toronto Maple Leafs – good and bad luck, as it were.

Then it will be Kevin Hatcher (T-306th), whose 227 goals were scored as a defenseman over a 1,157 game career. In fact, looking at places 301-330 on the all-time goal scoring list, Ovechkin has played in at least 133 fewer games than anyone on the list (hall of famer Charlie Conacher has the next fewest at 459 games played). Among left-wingers in NHL history, Ovechkin is tied for 83rd all time in goal scoring.

Ovechkin sits in a tie for 697th place on this list, not surprising for a goal-scoring winger. But it is a total that is higher than hall of famer Howie Morenz (201… ok, different eras). There is a Capital connection here, too, that Ovechkin is closing in on. With his next assist, he will tie Craig Laughlin. With another assist after that he will tie defenseman Dmitri Mironov, who played in 155 games for the Caps from 1998-1999 through 2000-2001, recording 38 of his career total of 206 assists. When he hits 208, he will tie Bill Clement, who played in 46 games for the Caps and recorded 17 of his career 208 helpers. After that, it’s Alan Haworth sitting in a tie for 673rd with 211 assists and teammate Mike Knuble, who is currently in a tie for 664th with 214 career assists. It’s worth noting, however, that among left wings, Ovechkin is sitting in a tie for 135th, while only having just begun his fifth season in the league.

Ovechkin is currently 496th all-time among all skaters in points. He is about to pass Hakan Loob (our favorite name in all of hockey), who totaled 429 points in a 450-game career. After that, his teammate Mike Knuble lurks again, sitting with 430 points in a tie at 488th place. Another former Cap is in sight – Gaetan Duchesne with 433 points (T-479th), then Sylvain Cote with 435 points (T-474th place). It should not take too long to overtake Dainius Zubrus, currently at 440 points (T-462nd place) and tied with Gaborik. Then he’ll have his sights set on Randy Burridge, who played in 150 of his 706 career games as a Cap, and who sits in a tie for 456th place at 450 points. Again, it’s worth noting that Ovechkin is already 113th all time among left wingers in total scoring.

Ovechkin is currently in a tie for 186th place all time in power play goal scoring (with Olli Jokinen and Stu Barnes). The next Capital on the rankings would be Bobby Carpenter who finished his career with 82 power play goals (T-175th). Ovechkin might get there before active players Daniel Briere (81), Patrik Elias (81), and Doug Weight (79), not to mention Jokinen. After that, the next Capitals connection he’d be chasing is Robert Lang, currently skating for the Phoenix Coyotes (85, T-165th). Ovechkin would be in trying to pass Lang before currently active players Vincent Lecavalier (85, T-165th), Scott Niedermayer (85, T-165th) and Brian Rolston (85, T-165th), although it would seem both would pass Lang before Ovechkin. But then, Ovechkin would have former Cap Sergei Gonchar (86, T-161st) in his sights, not to mention Mike Ridley (87, T-159th). Dennis Maruk would follow (89, T-153rd). Among left wingers, Ovechkin is already 40th all time in power play goals scored.

So, is he the next “Great One?” Well, even for the most addled Caps fan, this is a stretch. Gretzky compiled a body of statistical work that is unlikely to be approached, let alone broken. Ovechkin does have a shot at topping the goal total of 894. If Ovechkin was to keep up his career goal scoring pace to date (0.68 goals/game), and if he was to average 75 games played per year, he would break the record early in the 2022-2023 season.

It could be said, with more than a measure of truth, that Alex Ovechkin is a superior athlete to any of the players mention above, much in the same way a Tiger Woods is a superior athlete to Jack Nicklaus, Arnold Palmer, or Lee Trevino – players whose record Woods is likely to obliterate in his game. All that says is that Ovechkin might have a longer window for his prime than players of the past, but a window it still is.

That Ovechkin, as prolific as he has been and as the premier goal scorer of his generation, is no more than iffy to break the all-time goal scoring record by Wayne Gretzky, speaks to the truly unique character of Gretzky’s accomplishments and talents. And it does nothing to diminish those of the young Ovechkin to say that getting there – if only for the goal scoring measure – will be the longest of long shots.
Posted by The Peerless at 10:01 AM 6 comments: