The Peerless Prognosticator is ON THE AIR!!! -- Caps vs. Thrashers, April 7th

We’re in the last week of the regular season, and the Caps open in with the back half of a home-and-home against the Atlanta Thrashers. Rather than just rewrite what we wrote in advance of the game on Sunday, we’ll just point you to what we wrote the first time.

As for these teams, this will be the 56th meeting in the storied history of the Capitals-Thrashers rivalry. Here is the tale of the Caps' record against the Thrashers… 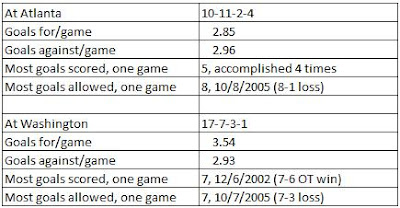 As you can see, the difference between Sunday’s game and Tuesday’s game is pretty much what you’d expect – the venue. Philips Arena has not been hospitable to the Capitals, the Caps having a losing record there since the Thrashers opened the arena in 1999. In fact, that losing record is the result of having lost both games played there this year. In those two games, the Thrashers…

- outscored the Caps 5-1 in the first period

- have gotten a pair of goals each from Slava Kozlov, Colby Armstrong, and Bryan Little

- have NOT gotten a goal from Ilya Kovalchuk

So…we’ll ask the cousins, Cheerless and Fearless…what do the Caps need to do to break the schneid? Feerless?

"Huh? I was checkin’ out the Red Rockers on the Caps’ web page."

Well, we encourage research, whatever the subject might be, so we’ll just go on to say that this game represents a chance for the Caps to win their 20th road game of the season. It would mark the seventh time in franchise history that the Caps won 20 road contests. And, it would keep the club in the hunt to tie the franchise record of 22 road wins, set in the 1983/1984 season. We think they’ll keep that goal in view… 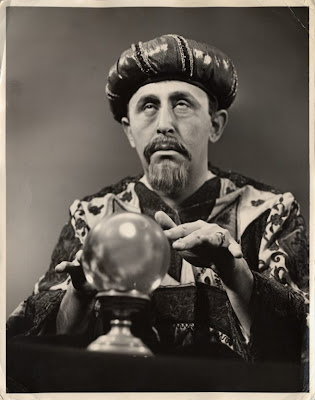 About those 55 goals and 51 assists for Ovechkin...
Not too bad on Backstrom (currently 22-60-82, +13)...
We were way wrong on Semin's plus-minus...
We were pretty good on Fedorov (at least his 82 game pace)...
We are pleased to have been on the under on Brooks Laich's year...
Ditto on Tomas Fleischmann's...
And we thought Theodore would be a little better (or at least a little more consistently good).
You can judge the rest of our prognostications from last fall against the Caps skaters and goalies.
Posted by The Peerless at 1:01 PM 2 comments:

Email ThisBlogThis!Share to TwitterShare to FacebookShare to Pinterest
Labels: prognostications

And, they're into the stretch...the Race for the Ross

Hockey is a team sport. Repeat, “hockey is a team sport.” OK, fine, but as fans we can indulge the “yeah, sez you” kind of bar stool arguments about who is a better player than whom and who will win such and such award. We’ll get to that in the coming days as far as the awards that are voted upon go, but some awards are purely a matter of arithmetic.

Like the Art Ross Trophy, awarded to the leading scorer in the league. Going into the final three games of the season, Evgeni Malkin of the Penguins and Alex Ovechkin of the Capitals are in a mano-a-mano, Russian-versus-Russian contest to see who will emerge with the hardware. Can Malkin hold off the hard charging Ovechkin? Can Ovechkin overtake Malkin to win his second consecutive Ross? If so, he would be the first repeat winner since the Penguins’ Jaromir Jagr turned the trick in 2001, only to be come a Cap weeks later.

Malkin enters the final week with three games to play and 108 points on 34 goals and 74 assists. Ovechkin, having played three fewer games, has 106 points on 55 goals and 51 assists. Both players have three games left. And in those three games, there is some relevant history to look at as perhaps a guide to the coming week.

The Penguins will face Tampa Bay, the Islanders, and Montreal. Malkin has had an extremely successful season against this trio of teams…

On the other hand, the Caps will play against division rivals Atlanta, Tampa Bay, and Florida. Against those teams, Ovechkin has been extremely productive…

Even looking at their last ten games, Ovechkin is the hotter of the two players. He is 7-12-19 in that span, while Malkin is 4-7-11. You’d have to think that Ovechkin is going to find a way to overtake Malkin in this last week, which should be the last impediment – given how voters seem to think out these things – to winning the Hart Trophy as league MVP. But let’s give credit where credit is due, too. Malkin has emerged into his own spotlight. He has become the top gun for the Penguins, which is no small feat on a team that employs Sidney Crosby in a productive capacity. And if Malkin should finish the week on top in the Ross Trophy race, he will certainly have earned it against the toughest competition imaginable.

Caps stink, have no defense, no goaltender, caused global warming

Well, maybe not that last part about global warming, but as for the first three, you would think the Caps were perusing the local golf course web sites for tee times based on the commentary from Keith Jones at TSN.ca on post-season awards...

No other defensemen and no goaltender. Green shouldn't win the Vezina, he should win the Hart and maybe the Nobel Prize for Hockey (hey, create the award for him...he's that good, apparently) for good measure.
Posted by The Peerless at 7:38 AM 3 comments: