No Gus, no fuss
Not today, not no way
For tomorrow
A forward to borrow.

And actually, the “borrowing” of a forward began today. Joe Finley was given a red jersey and skated as a forward in the Group B session today. Maybe it was part of the plan all along, since there had been talk of trying the defenseman at a forward position. Or maybe it was the absence of Gustafsson, who is becoming the Hard Luck Kid after what transpired yesterday – a gash needing 10 stitches to close and a mild concussion. Looks like he’s out for the duration.

But it was the Group A cohort that took the ice first this morning, and the word of the day for these guys was…

It was an iron works behind goalie Dan Dunn, as it seemed that every other shot banged a post. Goalie’s best friend, even in drills.

Meanwhile, there was a certain “Hershey” sort of air in the morning proceedings, as they were led by Coaches Woods (just promoted from of Hershey), French (promoted to replace Woods at Hershey), and Mann (brought in to serve as an assistant at Hershey).

As it has been for most of the week, the emphasis seemed to be on skating. There were a lot of end to end five-on-five drills that had the guys sprinting back and forth. Mixed in was a treat for the defensemen, a skating drill to test their agility in negotiating pylons (no, Jeff Schultz was not in attendance… that one’s for the Schultz-bashers) while skating backwards, then sending a pass to a teammate heading up ice.

One could get the feeling that it’s getting late in the week in this respect – there were a few occasions when the coaches had to hustle the guys into position, shouting at them to keep it moving. The guys in both sessions looked a bit slow.

In the Group B session, Finley was wearing the red sweater with Hauswirth and Meyer.

Dmitry Kugryshev was doing double duty in the second session, skating on a forward line and acting as translator of John Carlson’s instruction to Dmitri Orlov.

As for the other Carlson, Dustin looked as if he had shaken off the blitz he endured in yesterday’s scrimmage, but he was beaten on a few occasions – enough to do a passable impersonation of Olaf Kolzig… “F%$#!!!”

And there was Coach Bruce Boudreau, tucked away in the far end of the party balcony taking things in and engaged in conversation. He was found by some fans, though.

We’re down to it, now. One last scrimmage, scheduled for tomorrow at 10:00 am (not 10:30, as had been advertised). Even though some of the guys look a little worse for wear, and though there will be a few missing bodies, it should be a great show to end the week.

And here are some pics from today’s sessions… 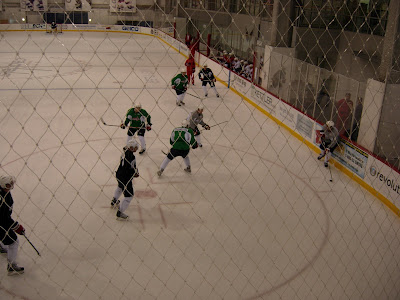 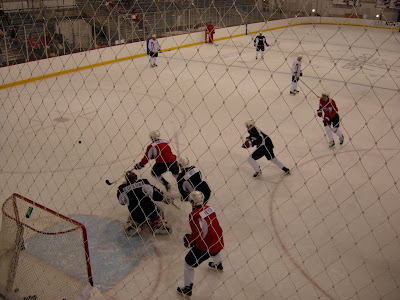 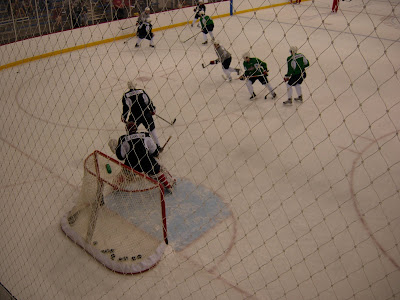 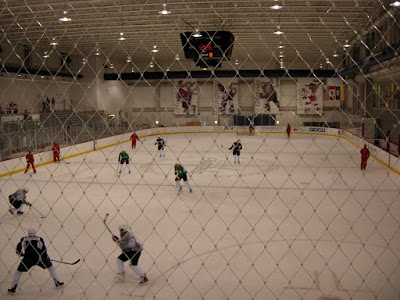 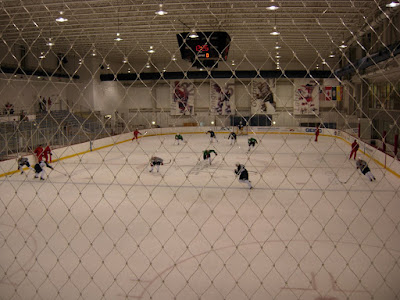 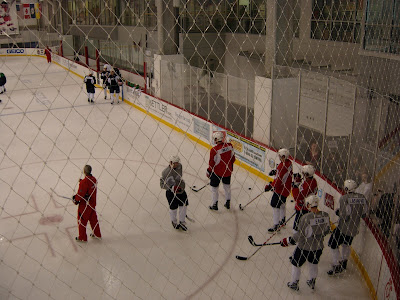 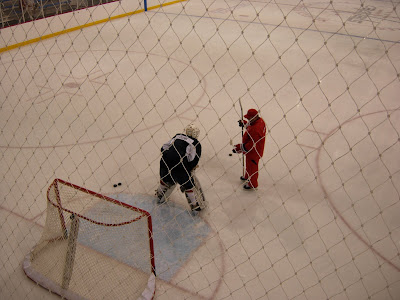 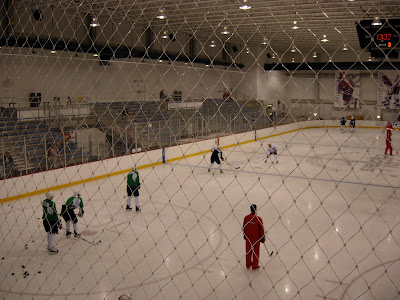 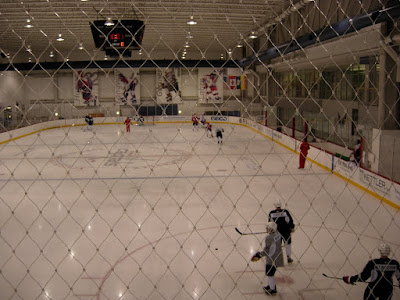 Posted by The Peerless at 2:38 PM No comments: