The Peerless Prognosticator is ON THE AIR!!! -- Game 16: Capitals at Predators, November 15th

The Caps go on the road this week for what will be, to date, their longest road swing of the season. They open the three-game trip in Nashville on Tuesday to take on the Predators. This is an opportunity for the guys to cast off the pressures of home and find their inner muse…


“Well, think of a ‘muse’ as a guiding spirit, a source of inspiration.”
“Oh, you mean like ‘Gretzichore’ the muse of goal scoring?”
“Something like that… -sigh-“
“And ‘Langwaynia’ for defense?”
He seems to be getting the hang of this…whodafigured?


“What do you know, cousin, a savant in our family.”
Let’s not get carried away…


“Winning Stanley Cups?”
Well, we’ll have to wait on that, but in the meantime the Caps face the Predators, a team the Caps have had some success against (9-5-1, all time), but one that can be frustrating to play. For instance, the teams have gone to extra time in each of the last four games they played. The Caps won them all (part of a five-game winning streak against the Predators), but nothing comes easily against the Preds. Here is how they stack up against one another so far… 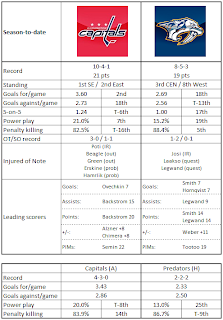 (click pic for larger image)
These are two teams coming into this game going in circles. Washington is 3-4-1 after a 7-0-0 start, while Nashville is 3-1-2 since shutting out Anaheim on October 29th. The Caps have have been outscored by opponents, 25-27, in their last eight games. Nashville has outscored opponents, 19-16, in their last six games. Neither team is dominating their opposition.

3. Who is Craig Smith? Well, he is tied for the team lead in goals (seven, with Patric Hornqvist) and leads the Predators in points (14). Not bad for a rookie who was a fourth round draft pick in 2009 after spending two years at the University of Wisconsin. If anything he has been hotter of late. Smith was 1-2-3 in his first two games of the season, then went four games without a point. However, in his last ten games he has not gone more than one game without a point, and he is 5-5-10, plus-1, in those ten games. He leads Nashville in power play goals with three.

5. Barry Trotz coached in his 1,000th game behind the Nashville bench last Saturday, only the fourth coach in NHL history to do reach that milestone with one team (Al Arbour, Lindy Ruff, and Billy Reay being the others). He has coached the Predators to five straight 40-win seasons and is on a pace to make it six. And he has done it with an underrated ability to get his team to score goals. True, Nashville is known primarily as a defensive team. But in those last five years in which the Preds have reached the 40-or-more win mark, they were ranked in the lower third of the league scoring rankings only twice and once finished fifth. That the Preds do not have high end goal scoring has been one of the things making Nashville, “Nashville.” But Trotz squeezes every bit of production out of what he has.

1. The five-game winning streak against Nashville is the longest winning streak the Capitals have outstanding against any NHL team. They have not lost to the Predators in Nashville since dropping a 5-2 decision in February 2004. OK, they’ve only played there three times since.

2. 23 skaters have dressed for the Caps so far this season. Twenty of them have recorded points, the only ones not doing so (Jay Beagle, D.J. King, and Sean Collins) have played two or fewer games.

3. Alex Ovechkin is on a pace to record almost 100 fewer shots (273) than his lowest shot total to date (367, last season). But he is also on a pace to finish with a total of missed shots (148) that are more than 50 percent of his shots on goal for the first time in his career.

5. Nicklas Backstrom has 11 points in seven road games so far this season. No player in the league has more points-per-game on the road.

Jordin Tootoo probably is not going to light up the score sheet in this game – he has one goal in five career games against Washington – but he is the kind of player who will keep opponents’ heads on a swivel. Leave aside the 57 career fights. He has 20 penalty minutes just in those five games against the Caps. He has been whistled for rules infractions in eight of his 16 games this season, including his last three. He is certainly a pot-stirrer.

In his last nine games John Carlson has points in six of them (2-4-6). He also has logged more than 23 minutes in five of his last seven games (more than 25 minutes three times). With injuries to the blue line, especially to Mike Green, Carlson has taken on a wider variety of responsibilities, but despite that has minus games only twice in his last nine contests (they happen to be his only “minus” games this season in 15 games). His plus-3 on the road leads all Caps defensemen. With Mike Green out, Carlson is likely to continue shouldering a significant share of the load.

2. Under 30. Nashville has topped the 30 shot mark at home only once this season. Meanwhile, the Caps have allowed more than 30 shots in five of seven road games, more than 40 in three of them. It would be nice to give the goaltender a bit of a break to start the trip and hold shots to a minimum.

3. More than Alex. Alex Ovechkin has all seven of his goals on the road. No other Cap has more than two road tallies. Of particular note, Brooks Laich and Alexander Semin have one road goal between them. The Caps need to get these two – or others – providing some goal scoring support.

In the end, the Caps should have learned something about playing “small-ball” in their two games against New Jersey. Nashville does it more with top-notch goaltending, but between Pekka Rinne in goal and the Shea Weber-Ryan Suter pair on the blueline, goals will still be at a premium. The trouble is, the Caps are only 3-3-1 when scoring three goals or fewer, and they have lost their last four (0-3-1). It seems likely that this will be one of those small-ball games, and the Caps need to find their way back to winning that kind of contest.