When the Washington Capitals and the Tampa Bay Lightning took the ice on Tuesday night at Verizon Center, one might have thought it would be a battle of goaltenders.  Tampa Bay’s Ben Bishop was among the league leaders in goals against average and save percentage, and Washington’s Braden Holtby had established himself as the go-to goaltender for the Caps who had climbed into the top-15 in save percentage after a slow start.

Things did not quite work out that way.  Holtby was chased early, and Bishop was abused in the middle and late as the Capitals roared back from a 3-0 deficit to defeat the Lightning, 6-5, in a trick shot competition.

Tampa Bay lit up Holtby for three goals on eight shots in 11:07 of ice time in the first period before he was relieved in favor of Philipp Grubauer.  It was a case of Tampa Bay taking advantage of the odd play of Mike Green, who took three minor penalties in the first 9:07, the first two a double minor for hi-sticking.  The Lightning scored two power play goals in those three chances, then added an even-strength goal to make it 3-0.

It might have ended there, but Alex Ovechkin scored late in the first period on a one-timer that you would have to watch in slow motion to see the shot.  Nicklas Backstrom won a draw cleanly to Ovechkin, who blasted a shot between the legs of defenseman Andrej Sustr and past the blocker of goalie Ben Bishop.

Then came the second period.  Backstrom got the Caps back in it with a power play goal at 6:24 when a loose puck slid through the legs of defenseman Matt Carle and onto the stick of Backstrom, who beat Bishop high to the glove side to make it 3-2.

After Tyler Johnson restored the Lightning two-goal lead, the turning point of the game came.  Richard Panik was given a five-minute major penalty for boarding Karl Alzner in front of the scorer’s bench.  Seven seconds after the penalty was called, it was Ovechkin lulling B.J. Crombeen to sleep on another power play, jumping past Crombeen on a timing play to convert a pass from Marcus Johansson to make it 4-3.  Two minutes later, on the same power play, it was Ovechkin again for the hat trick, one-timing a pass from Mike Green with 72 seconds left in the period to tie the game at four apiece.

In the third period Ondrej Palat scored when Tyler Johnson whiffed on a shot in front of Grubauer, and the puck slid to Palat for a wrister that found the back of the net.  It almost ended that way.

With Grubauer pulled for an extra attacker in the last minute, the Backstrom and Mikhail Grabovski did the hard work in the corner to win control of the puck and get it out to John Carlson at the left point.  Carlson wired the puck across to Ovechkin, who one-timed the puck through Bishop for his fourth goal and a 5-5 tie.

After a scoreless overtime, it was left to the freestyle competition.  Through four rounds, Eric Fehr and Mikhail Grabovski scored for the Caps, Nikita Kucherov and Teddy Purcell for the Bolts.  That left it up to Troy Brouwer for the Caps, who beat Bishop to the glove side and put the pressure on Ondrej Palat for the Lightning.  Grubauer turned away Palat’s attempt with his blocker, and as the puck slid slowly by the right post, the Caps’ comeback was complete.

-- For those of you scoring at home, that makes 48 goals in Alex Ovechkin’s last 50 games.  Since Ovechkin came into the league in 2005-2006, four-goal games have been accomplished 26 times.  Ovechkin is the only player to accomplish the feat three times.

-- Nicklas Backstom had the fourth five-point game of his career.  The four assists he had in this one gives Backstrom 46 helpers in his last 52 games.

-- The 18 minutes in penalties for Mike Green is a career high for a single game.  He had 20 penalty minutes in 35 games last season.

-- If you look at the possession metrics, it is a story of two games.  The first was the first 11 minutes in which the Lightning scored three goals and held the Caps without a Fenwick event (shot on goal, missed shot) at 5-on-5 – not 5-on-5 close…5-on-5, period – for the first ten minutes.  After that, however, the slope of the Fenwick lines were closer (source: extraskater.com)… 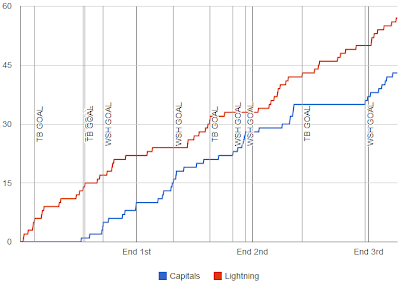 -- We said in the prognosto that Marty St. Louis would get his points.  He did.  A goal and two assists for The Constant Irritant.  We also said Valtteri Filppula could not and the Caps still win.  He did not…no points.  But geez, everyone else did for the Lightning.  After St. Louis, nine other Lightning had points.  Tyler Johnson had the biggest night of his career to date with a goal and two assists.

-- The Caps broke a streak for Ben Bishop in which he allowed two or fewer goals in five consecutive games.

-- The weirdest scoring line on either team’s score sheet has to be Nate Schmidt’s.  In 14 minutes and change… nothing.  No shots, no shot attempts, no hits, no takeaways, no blocked shots.

It was one helluva comeback, but before we get too giddy, think on this.  Ovechkin had four goals…Backstrom had five points.  Both finished “even” for the game.  The Lightning let the door swing wide open with the Panik major penalty, and the Caps stormed through it.  Good on them.  But it was not the kind of win you want to point to and say, “they played well.”  The Caps fought furiously to come back, and in one of those instances when the effort expended has a cost, almost let it slip away again when the Lightning scored in the third period.  But this was testament to the skill and determination that Alex Ovechkin and Nicklas Backstrom still have, and on this night it was enough to sustain the Caps and remind fans just how good they remain.