Tomorrow, either Semyon Varlamov or Michal Neuvirth will earn a decision against the Tampa Bay Lightning at Verizon Center.  When Varlamov (last week's NHL First Star of the Week) or Neuvirth record that decision, it will be the 82nd decision of their combined careers for the Caps to date -- a full season's worth of games.  Through 81 decisions between them, their record is this:

Not bad for a pair of kids who comprise the "inferior" goaltending of the Caps, eh?
Posted by The Peerless at 1:04 PM No comments:

There ARE No Guarantees

In this morning's Washington Post, Tracee Hamilton opines on the wisdom of holding outdoor hockey games in places where the great outdoors doesn't cooperate...

"...if you're going to stage an outdoor hockey game you'd better hold it somewhere with some guaranteed ice and snow, like Manhattan, or the Metrodome."

On Sunday, the high in Manhattan was 55 degrees.  And in case you missed it, the SNOW-damaged Metrodome will not be fixed until March after the roof collapsed as a result of a storm that dumped 17 inches of snow on Minneapolis on December 12th.  Think the Winter Classic would have been a better aesthetic affair from a hockey point of view if the game was held with all that snow falling at, say, Target Field?  Be careful what you wish for.

A 50-degree day in Pittsburgh on the first day of the new year isn't normal (actually, a 34-degree day is).  And don't forget, the first Winter Classic in Buffalo was interrupted countless times because there was too much snow, slowing the puck to a crawl any time a player tried to make a pass more than four feet.

Going outdoors has risks.  If the league and its broadcast partners aren't willing to acknowledge those risks, then they shouldn't be having this game.  They can retreat to the friendlier, more predictable confines of indoor arenas.  But the quirkiness of the weather is part of the spectacle, too.  From the snow-globe setting in Buffalo to the clear as crystal chill in Chicago and Boston, to the rooster tails kicking up when pucks were sent across the soggy rink at Heinz Field.  Even "The Big Chill" in Ann Arbor, Michigan, in December started in the late afternoon with temperatures in the relatively balmy low 40's, not exactly what Michigan is known for in December.  Weather happens.

This isn't an argument to have games in Miami or Phoenix.  This is, after all, a "Winter" Classic.  But even holding games in what are usually thought to be cold-weather sites -- and Pittsburgh sure qualifies -- will never be without their risks of uncooperative weather.  Whether what happened on Sunday will give league officials pause with respect to scheduling a New Year's Day game in Washington, we can't know (not that it kept us from scribbling about it), but it shouldn't disqualify cities like Washington or Philadelphia or cities along similar latitudes from hosting the game.

You do the best you can with the information you have, and you make informed decisions.  It doesn't mean you don't have to take your chances.  Just make sure Dan Craig is available to work his magic on the ice.
Posted by The Peerless at 8:18 AM No comments:

A Last Look at the Classic

Just a few snapshots we took on our way to and into the game on Saturday.  After we hopped on the 98F shuttle to Heinz Field we got out at the Spectator Plaza in the middle of a Malkin infestation (click for larger version)... 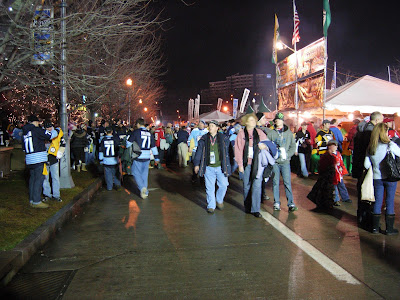 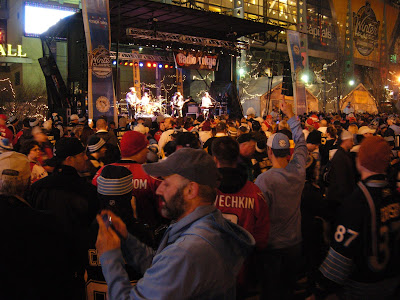 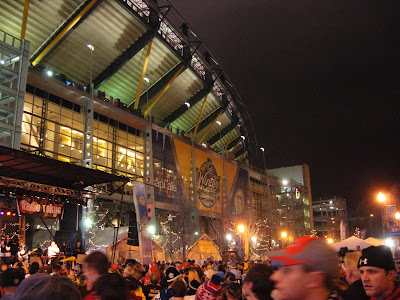 Inside, there are reminders of who the principal tenant of this facility is... 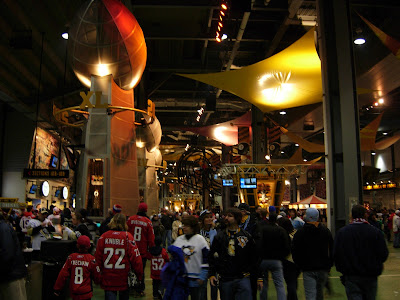 The centerpiece of the event, as seen from high atop Section 510, Row Z... 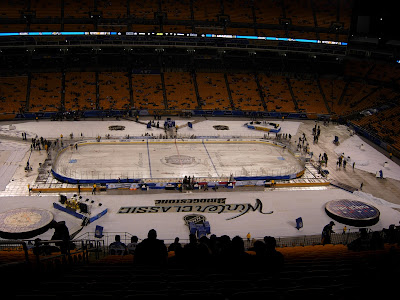 The Caps take the ice for the pre-game warmup... And now, the March of the Ornery Opponents... 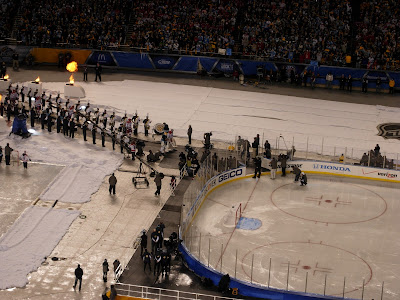 The ceremonial pre-game puck drop, or "Another Tribute to Mario"... 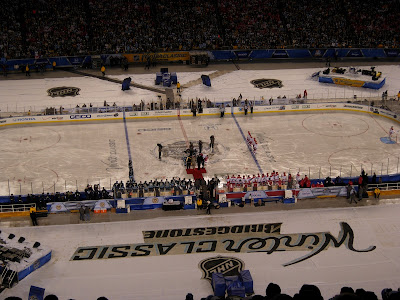 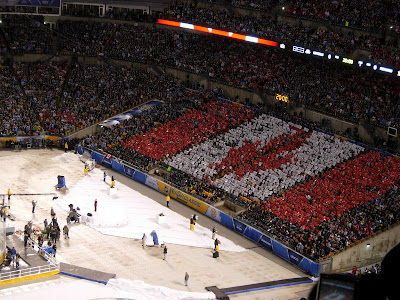 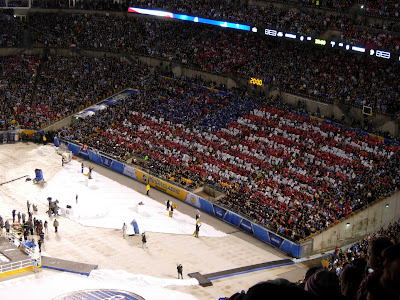 The rest, you saw.  And if you didn't, then catch the last episode of HBO's 24/7.  They'll have a few pictures likely to be better than these...
Posted by The Peerless at 6:38 AM No comments: