The Peerless Prognosticator is ON THE AIR!!! -- Caps vs. Sabres, April 2nd

The Washington Capitals have a chance to do something they have not done since December 3rd – occupy the top spot in the Eastern Conference at the end of the day. With the Philadelphia Flyers dropping a 4-2 decision to the New Jersey Devils, the Caps can jump over the Flyers into first place in the East if they defeat tonight’s opponent at Verizon Center, the Buffalo Sabres.

But “Sabres?” Well, according to the team’s web site, “the Buffalo Sabres’ founding fathers wanted to be different” Well, maybe not so much…there is that alliterative thing again. In a fit of imagination that could only have been replicated among hundreds of sports teams that can’t think up a name on their own, the expansion Buffalo NHL franchise held a fan contest. Again, according to the Sabres’ web site…

“More than 13,000 entries were submitted, bearing more than 1,000 different names that weren't already used by a team or stemming from the root of the word Buffalo.

“From the serious to the silly the names poured in from contestants both right in Buffalo and as far away as Germany. The Flying Zeppelins, the Streaks, the Buzzing Bees, the Comets, Mugwumps and Herd were all eliminated one by one, until the Buffalo group found what they had been searching for.”

One could only imagine current Buffalo play-by-play man Rick Jeanneret calling a game for the “Mugwumps.”

But none of those names met the lofty standards the franchise’s founding fathers had (geez, now we’re doing it!). The club seemed to like the entry, “Sabres,” as it “is renowned as a clean, sharp, decisive and penetrating weapon on offense, as well as a strong parrying weapon on defense." It also had the charm of not being a word that started with the letter “B,” but that didn’t make the press release. Four fans submitted the name; the club held a lottery to pick a winner (season tickets being the prize); and Robert Sonnelitter Jr's name was selected, thus ensuring that he would forever be remembered as the person who officially named the Buffalo “Sabres.”

But we would have leaned toward “Mugwumps.”

The Sabres come to Verizon Center fighting to hang onto a playoff spot and with five games left to accomplish the feat. Buffalo is currently in seventh place (by virtue of winning tie-breakers with the New York Rangers), three points ahead of the ninth-place Carolina Hurricanes. They are coming to Washington on something of a roll, too. Winners of four of their last five games, the Sabres have three shutouts in those four wins and allowed a total of six goals in the five games. Overall, their numbers stack up against those of the Caps as follows: 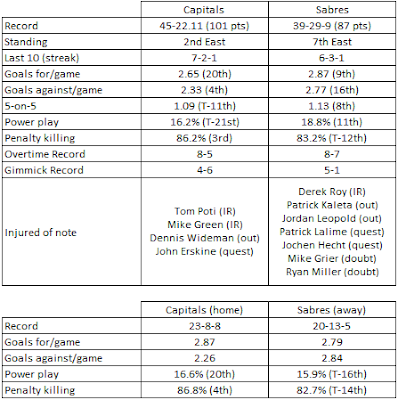 The third of those three shutouts over the last five games was credited to Jhonas Enroth – his first in his NHL career. That he took the ice against the Rangers in the 1-0 win was not a product of giving number one goalie and defending Vezina Trophy winner Ryan Miller the night off. It was necessity borne of the fact that Miller is injured, a victim of the dreaded “upper body injury.” Miller did not make the trip to Washington (after reports he would be on the flight), leaving Enroth to man the nets again.

Enroth was quoted yesterday as saying, "I want to play, and back-to-back is always fun.” Well, if that’s fun, then Enroth has not had much of it with the Sabres. He has only nine appearances for the Sabres this season, and hasn’t had back-to-back appearances since he tended goal in back-to-back games on November 10th and 11th (a win and an overtime loss). Enroth is undefeated in the 2011 portion of the season, going 4-0-0, 1.96, .934, and his shutout. In ten career appearances in the NHL, he has none against the Caps among them. He does, however, bring a personal four-game road winning streak into this game.

If you were asked, “who is Buffalo’s leading goal scorer?”, you might instinctively respond, “Thomas Vanek.” Good answer, but it happens to be incorrect. Drew Stafford has quietly assembled quite a season, considering he has missed 20 games this season. Despite four separate stretches on the bench due to injury (shoulder, “upper body,” groin, and hamstring), he has 28 goals in 57 games, a 40-goal pace over 82 games. Stafford has four hat tricks this season, but what he also has is only two goals in his last ten games (both coming in a 4-2- win over Florida on March 25th) and only four in his last 20 games. If the Sabres are going to secure one of those eight playoff spots, especially if Ryan Miller misses any more time, Stafford’s stick might still have to have some magic in it. He does seem to like Saturday’s though. In 13 Saturday games this season he has nine goals, including one of his four hat tricks. In 14 career games against the Caps, Stafford is 5-2-7, minus-3.

Meanwhile, that fellow you might have thought of as the Sabres’ leading goal scorer – Thomas Vanek – leads the team in assists and is on the brink of setting a career best in helpers (that being 41 in 2006-2007). The Sabres’ leading point getter this year (27-39-66) is also bearing the lion’s share of the scoring load down the stretch. In his last 13 games Vanek is 4-10-14, plus-8. And he comes into this game with a four-game points streak. In 22 career games against the Caps he is 8-7-15, plus-4. Vanek is also the Sabre that Caps fans will not want to see in the Gimmick. He is 5-for-6 so far this season and has not missed in four attempts on the road. Vanek and Stafford pose quite a one-two punch problem with the man advantage. The two have combined for 19 of the Sabres’ 50 power play goals (Vanek – 10, Stafford – 9).

On defense, Tyler Myers is the young phenom, Jordan Leopold gets the goals (13 so far, but he is out for this game), but it is Steve Montador who is a plus-14. This is the ninth season in which Montador has toiled in the NHL, and he is with his fifth team (second season with the Sabres). His scoring numbers to date (5-18-23) precisely match those he had for Buffalo last season, but he has that plus-14, where he was merely “even” last year. Offense is not generally a part of his game (the five goals in each of the last two seasons as well as the 23 points being his career best). The difficulty for the Sabres, though, is that Montador hasn’t had a “plus” game in almost a month (March 6th) and is minus-6 over his last eight games. He was on the ice for eight of the 18 goals scored against the Sabres in those games. In 32 career games against the Caps he is 3-2-5, minus-1.

When the season started, Tyler Myers looked as if he could have had “sophomore slump” pinned on his jersey. In 25 games covering the October and November portions of the season, Myers was 5-3-8, minus-10. He seems to have put the “slump” part to rest. In his last 19 games he is 2-8-10, plus-9, and only twice skated less than 20 minutes a game. With Ryan Miller out, there is likely to be greater need for skaters to give Jhonas Enroth a hand in preventing goals, and that starts with Myers, who – with Jordan Leopold injured – is the ice time leader on the blue line.

All of a sudden, the goaltending situation for the Caps has grown a bit murky. After posting a shutout against the New Jersey Devils on March 18th, Neuvirth has allowed seven goals on 56 shots (.875 save percentage) over his last two games. With Semyon Varlamov stopping 45 of 49 in his last two games (.918), the race is still on to see who gets the call in Game 1 of Round 1 of the playoffs. If Neuvirth is going to be that guy, grabbing the job by the throat tonight could not hurt. Of course, the same could be said when Varlamov makes his next appearance, be that tonight or perhaps Tuesday in Toronto.

1. Beware the Balance. Seems as if Lindy Ruff-coached teams always have balance. Eighteen different skaters have at least ten points; 11 have at least ten goals (the comparable numbers are 17 and 7 for the Caps). Sixteen different skaters have game-winning goals. The Sabres can get contributions from anywhere. They might not be flashy up top, but they’re not weak on the bottom of their lines and pairs, either.

3. Tenderize. The Sabres are neither especially big, nor especially physical. They are 29th in the league in hits. Even allowing for the subjective nature of the statistic, that is indicative of a team that would rather have open ice than muck in the corners. The Caps aren’t especially physical either, at least in a manner consistent with their being among the bigger teams in the league, but they do need to use their size to advantage in winning fights for the puck.

In the end, this will be the last time around the ice for NHL referee Bill McCreary, right where it began 27 years ago, officiating a 6-4 Caps win over the New Jersey Devils on November 3, 1984. In between he officiated in more post season (playoff and Stanley Cup finals) games than any referee in NHL history, and he will end his career as one of only four referees to have officiated in more than 1,500 games. And that doesn’t include participating at three Winter Olympics, where he officiated in the gold medal game of each. It’s a body of work that commands respect…or maybe wearing a moustache in his honor tonight. Best of luck, Bill. And just as it started, so it will end…with a Caps win. 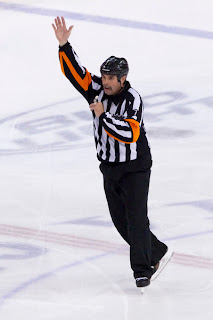