Because if you do, and you're a hockey fan...well, this should be right up your alley, courtesy of Tic Tac Toe Hockey: 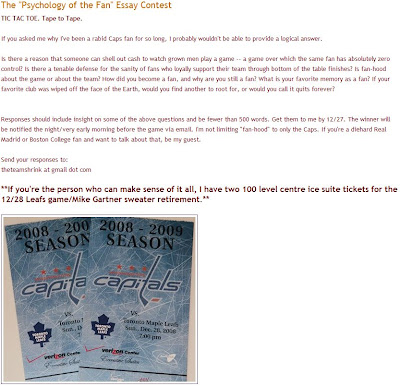 So have at it, you creative writers...a suite might be in your future.

According to Tarik El-Bashir on the Capital Insider, Tomas Fleischmann was absent from this morning's skate, but Oskar Osala (late of the Hershey Bears, where he was tearing up the league) was present. This is getting way, way out of hand... 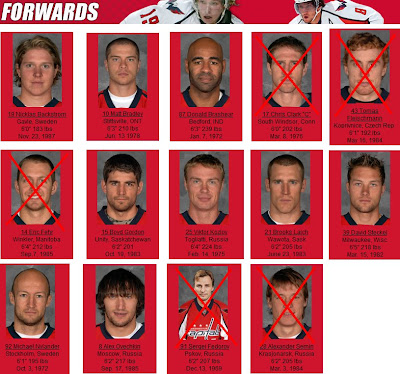 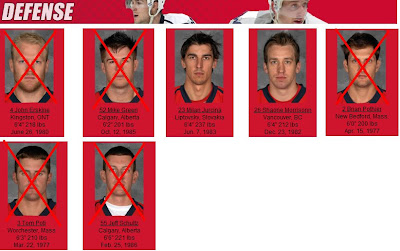 Email ThisBlogThis!Share to TwitterShare to FacebookShare to Pinterest
Labels: injuries

In their 28th game, also played on a December 10th evening, they lost to another team clad in red, white, and blue (the Montreal Canadiens on that occasion), 4-2.

Just something to think about.
Posted by The Peerless at 9:49 AM No comments:

Email ThisBlogThis!Share to TwitterShare to FacebookShare to Pinterest
Labels: Bruins, things that make you go 'hmm...'

The Peerless Prognosticator is ON THE AIR!!! -- Caps vs. Bruins, December 10th

It’s back home for the boys of winter as the Caps host the Boston Bruins. And what a challenge it will be as the numbers suggest… 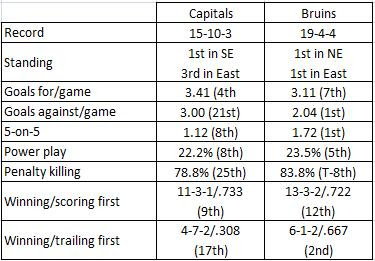 What is apparent from these numbers is that the Caps have been pretty good, the Bruins have been sick. Boston comes into this game having gone 14-1-1 since November 1st, taking them from 5-3-3 to 19-4-4. Thankfully, this game is not in Boston, where the Bruins are 10-1-1. But they aren’t slouches on the road, either, with a record of 9-3-3…

“Thanks, Peerless…and did you know that the Big Bad Bruins have only given up 11 goals in seven road games since starting that streak on November 1st?”

“You bet, and if they give up more than two in this one, I’ll give you and all of your readers free picks from my service for the entire season, and as you know, I am more than 90 percent correct in Wednesday night games in the Eastern time zone this year…documented.”

Documented?...really? Who does this documenting?

Well, Dwayne, how about that Bruin power play…humming along at more than 23 percent so far…

“True, Peerless, but here’s what separates the pros from the amateurs in this business…Boston is only 2-for-21 on the power play on the road in this streak, and if they get a power play goal tonight, I’ll give you and your readers free picks from my service, where I am over 85 percent right on goals scored in the second period in games shown on Hockey Night in Canada this year…documented!”

Well, that’s quite an offer. But what about that penalty kill…Boston is in the top third in the league in that stat, too.

“Bingo, big guy, but not only that, but they have killed 28-of-29 shorthanded situations on the road since November 1st, and the last 28 in a row. If the Caps get a power play goal, I will personally guarantee – documented – the winning pick in the Winter Classic between the Lake Erie Monsters and the San Antonio Rampage.”

I thought the Winter Classic was pitting the Detroit Red Wings against the Chicago Blackhawks.

“You have your winter classics, oh wordy one, and I have mine, and if the Wings and Blackhawks score more goals than the Monsters and the Rampage, I will personally strip down to my skivvies and sing ‘Swing Low, Sweet Chariot’ at center ice of the Verizon Center.”

What about the matter of scoring first or trailing first?

“The Bruins might not having quite the record the Caps have when scoring first, but they’ve shown they can play from behind – they’ve only lost one game in regulation when allowing the first goal, and if they have a lead after two periods, it’s lights out. Only San Jose has more wins when leading at the second intermission, and the Bruins have not lost such a game in regulation yet.”

“Not as impressive as this offer, Peerless…if the Bruins lead after two periods and lose, I will offer each of your readers a Platinum Pass to watch me kiss Gary Bettman on the mouth.”

What about the players…is it as impressive a group as the team stats suggest?

And I’m guessing no one is calling for the Bruins to be trading Phil Kessel anymore.

Is there a partridge in a pear tree in there, too?

“We don’t do birds, Peerless, but we do have a guarantee…if Kessel is held off the score sheet, I will submit to a cage match with Slapshot the Mascot and pay the fees for the pay-per-view orders for each of your readers…”

Any surprises in there?

“Well, folks might look at the stats and think, ‘Where did David Krejci come from?’ with those eight goals and 24 points, not to mention his being plus-15. But I’ve known all along, Peerless, he came from Sternberk, Czech Republic.”

You have to bow to the master knowing details like that…

"That’s why they call me the Baron of Bullsh—uh, the best in the business, Peerless.”

We took a peek at the Bruins a little while back as the team unlike any other. Actually, what they look like is the San Jose Sharks in their ability to score and keep opponents from scoring (both are top-five in goals scored and fewest goals allowed), in their ability to achieve success on special teams (both are top-ten in power play and penalty killing), and in their balance (both have at least ten players in double digit scoring and in game-winning goals). And we know what the Sharks did to the Caps.

It is also a team getting contributions from some unexpected places...

Matt Hunwick (we'll wait while you look him up in "The NHL Guide to Players You've Never Heard Of") has played 15 games and has ten points while going +13 from the blueline.

Chuck Kobasew seems finally to have found a niche after a somewhat disappointing career start on the heels of his being picked 14th overall by Calgary in 2001. He's 5-9-14, +9 in 15 games.

If anything, the mystery on this team is how a guy like Petteri Nokelainen can have failed to register a single point this season in 19 games getting more than ten minutes a night...he'll probably get a hat trick tonight.

As if the Bruins aren't impressive enough among their skaters, in goal Tim Thomas tops the league leader board in goals against (1.90) and is second in save percentage (.940). Consistent? He hasn't allowed more than three goals in a game since opening night. Only twice in 17 appearances has he allowed as many as three even strength goals. He's had a lot of success against the Caps, too -- 8-1-1 in ten appearances, 2.42, .922, and a shutout. And that includes a game in which he gave up seven goals (the 10-2 loss to Washington last March 3rd).

It's easy to look at someone like Zdeno Chara (who could miss him?) and his ability to drape himself all over Alex Ovechkin, or look at the gaudy numbers of a Tim Thomas in goal, or ponder the sledgehammer that is Milan Lucic. But Savard is the guy who makes things go for the Bruins, and he has assembled quite a resume against the Caps. In 31 career games against Washington, he is 7-35-42, +10, with four power play goals and two game-winners. He has 12 assists in his last eight games against Washington.

Nylander has the reputation of being a playmaker (some might argue too much of one). But against Boston in his career, he has 14 goals in 34 career games -- a 34-goal pace over a full season's worth of games. The Caps are likely to need a full spread of offense across their scoring lines for this one, and Nylander, who hasn't had a goal since October 16th -- a stretch of 23 games -- really needs to get off the schneid.

The Caps are likely to get a bit healthier for this one, and it couldn't come at a better time. Boston is at the top of their game right now at both ends of the ice. That only means the Caps have them exactly where they want them...