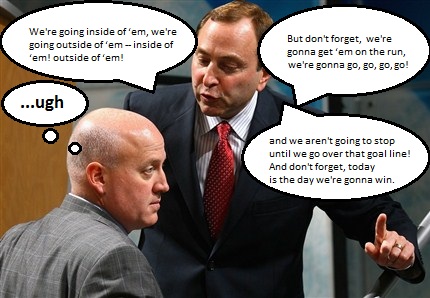 With apologies to Knute Rockne and Bruce Bennett of Getty Images, who took this inspirational photograph.
Posted by The Peerless at 11:33 AM No comments: 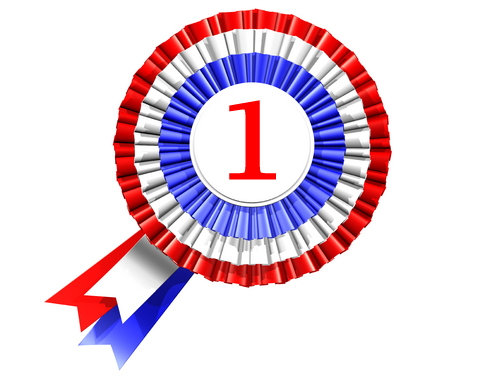 Quick on the heels of last night’s Opening Night win against the New Jersey Devils, the Caps took to the road to face the Ottawa Senators at Scotiabank Place.  It was the home opener for the Senators, but it was the Capitals who came out and started fast.  It was early pressure that gave Washington the early lead.  With the Caps pinning the Senators in their own end, Erik Karlsson tried to pass the puck against the grain from behind his own net, but did not see Brooks Laich stepping in front of Milan Michalek in the left wing faceoff circle.  Laich found Joel Ward in the high slot, and Ward wasted no time snapping the puck past goalie Craig Anderson for the game’s first goal at 1:55.

The Caps took a two-goal lead on the next shift when Mike Green floated a wrist shot from the right point that sailed past a clot of bodies in front of Anderson and past the goalie’s left shoulder.  Senators head coach Paul MacLean called his time out to settle his team down and change the game’s rhythm, which was to the Caps’ liking to that point.  The Senators had a chance to reverse the momentum when Wojtek Wolski took a high-sticking penalty at the eight minute mark of the period, but the Senators failed to record a shot on goal on the power play.

The Caps had a chance to put the Senators in a deep hole as the Wolski penalty expired, Nicklas Backstrom corralling a loose puck along the boards and sending a pass out to Wolski as he was breaking from the penalty box.  Wolski skated in alone on Anderson, but the goalie stretched his right pad to foil an attempt by Wolski to stuff the puck inside the post.  That concluded the scoring chances for the first period, the Caps skating off after 20 minutes with a 12-7 advantage in shots and a 2-0 lead on the scoreboard.

The second period featured a lot of back and forth action, but little by way of scoring chances.  Ottawa received its second power play when Alex Ovechkin was whistled off for charging on defenseman Sergei Gonchar.  Ottawa could not convert on the opportunity, though, and gave it back when Colin Greening went off for tripping Wolski at 12:55 of the period.  The Capitals were as ineffective on their power play as Ottawa was on its, and the clubs skated to the locker rooms at the second intermission with the Capitals still holding a 2-0 lead.

The third period got underway with the Caps getting another opportunity to put the Senators in a bind.  From the right wing faceoff dot Mike Ribeiro found Jason Chimera all alone on the far post for what should have been a tap-in goal, but Chimera’s redirect hit the post and rebounded under the pads of Anderson.

It was the momentum changer the Senators were looking for as they started to press the Caps harder in their own end.  Despite the heavy pressure, though, Michal Neuvirth kept the score sheet clean, foiling Eric Condra with a fine glove save off a wrist shot and keeping his frame square to the shot as Milan Michalek redirected an Erik Karlsson shot down and into Neuvirth’s pads.

The Senators looked as if they would remain snakebit in their home opener when the antidote presented itself in the form of Jason Spezza.  With the game clock under five minutes Karlsson faked a shot from the top of the offensive zone and sent a drive to Neuvirth’s right.  Spezza redirected the puck up and over Neuvirth’s right pad to halve the lead with 4:32 to play.

Ottawa pulled Anderson for an extra attacker with 1:22 left in regulation.  The strategy does not work often, but it did for the Senators in the dying seconds.  Chris Phillips sent the puck to the net where it ricocheted off legs in front.  From amid the pile of bodies in front fighting for the puck, Daniel Alfredsson backhanded the puck through Neuvirth’s pads with six seconds left to tie the game for the Senators.

Overtime opened cautiously for both teams, neither wanting to make a mistake with the added open ice at 4-on-4.  Ovechkin had an opportunity skating in on Phillips, who was giving ground to the onrushing winger, but the wrist shot Ovechkin took skimmed the near post and went wide.  The Senators had a chance when a Gonchar shot hit a body in front and skittered onto the stick of Greening, but his shot was hurried and sailed wide.  Overtime ended with both teams putting three shots on goal, but none of them in the net.

It was left to the Gimmick to settle things.  Ottawa shot first with their captain Daniel Alfredsson taking the turn.  Alfredsson skated in slowly, faked pulling the puck to his backhand and stuffed it under Neuvirth for a goal.  Matt Hendricks opened for the Caps.  Last year’s darling of the fifth period did not disappoint.  Skating deliberately toward Anderson, Hendricks reached the hash marks and feinted left, went right, and backhanded the puck over Anderson to tie things up.

Jason Spezza took the next turn for the Senators.  Spezza went simple, going wide trying to get Neuvirth’s feet moving as he cut back across the middle.  Neuvirth left just enough of an opening for Spezza to go five-hole, and the Senators had the advantage again.  Wojtek Wolski took his turn skating directly at Anderson.  He froze Anderson by edging the puck to his backhand, then pulling it back to his forehand as Anderson bit on the move.  Wolski tucked the puck in to tie things up again.

Milan Michalek took the top of the third round for Ottawa.  He wasted no time with many moves.  He skated in, and perhaps Neuvirth was expecting something tricky, but he was unprepared for Michalek’s snapping a shot off the post past Neuvirth’s blocker and in.  That left it up to Alex Ovechkin for the Capitals.  He took a page from Michalek’s book and skated smartly toward Anderson in the Ottawa net.  He pulled a move out of yesterday, the leg pump as he hit the hash marks.  His snap shot beat Anderson, but it rang off the post and out.  The Senators took the trick shot competition and the game, 3-2.