The scouting report for Washington Capitals forward Carl Hagelin contains no surprises when it comes to his assets and flaws.  As they put it:

“Assets: Owns tremendous speed, especially on the outside of defenders. Also has excellent defensive instincts, as well as streaky offensive ability. Can be an impactful forward on the penalty kill.”

“Flaws: Does not have ideal size for the National Hockey League game. Tends to run hot and cold in the scoring department. Lacks confidence in his shooting ability in the NHL.”

It is that juxtaposition of assets – “tremendous speed” – and his frustrating tendency to run hot and cold as a scorer that confounds observers.  Only twice in ten NHL seasons has Hagelin finished with a shooting percentage over 10.0 percent, and the last time he did it was in 2013-2014, when he had 17 goals (tied for a career high) on 144 shots (11.8 percent, his career high).

Overall, Hagelin was a consistent performer, although (as one would expect) at a fourth-liner level of production, as illustrated by his ten-game splits.  Goals, assists, points, and shots on goal differ little among the splits as the season progressed. 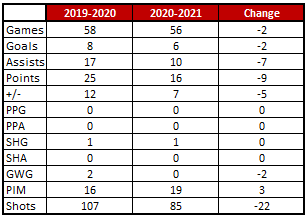 Odd Hagelin Fact… Carl Hagelin recorded at least two shots on goal in 23 games this season and posted goals in only three of those games.  Her recorded a single shot in 22 games and scored goals in three of them.  The adage “volume, volume, volume” did not apply to Hagelin in this matter.

Odd Hagelin Fact III… This one actually goes to Hagelin and his fourth line mates.  He, Nic Dowd, and Garnet Hathaway all appeared in 56 games, and all of them were on ice for 23 even strength goals against.

Game to Remember… March 13, 2021 vs. Philadelphia.  The Caps and Flyers had a two game set in Philadelphia in mid-March that was kind to the Caps’ offense in both games, each game ending with the Caps scoring five goals.  However, it was a pair of games with very different results for Carl Hagelin.  In the first game of the set, ten Caps recorded points, including Ilya Samsonov, who assisted on a Nic Dowd empty netter in the 5-3 win.  Hagelin was not among the ten with a crooked number in the points column, though, and he logged just 11:50 in ice time.  Things were quite different two nights later for Hagelin.  In the 5-4 win, Hagelin had a goal (on his only shot on goal) and an assist (one of three two-point games he had this season), posted a season high plus-3 rating, and logged 16:58 in ice time.

Game to Forget… February 14, 2021 vs. Pittsburgh.  It is always nice to make a team you once played for pay for parting ways.  Conversely, it is bitter to face a former team and have disappointing results.  The latter was the case for Hagelin when the Caps visited the Penguins on February 14th.  The Caps got out to a 1-0 lead five minutes into the game, but Hagelin was on ice for the first three Penguin goals as the home team took a 3-2 lead less than seven minutes into the second period.  By the time it was over, Hagelin had no points, no shot attempts, a minus-2 rating, and skated only 9:37 in a 6-3 loss to his former club.

Postseason… When the Caps won the Stanley Cup in 2018, one of the keys was getting contributions from bottom six forwards.  This has been an issue with the club in the last three postseasons.  Regarding Hagelin, he was 0-1-1 in five games, the third straight postseason in which he finished 0-1-1 for the Caps.  His playoff performances have been disappointing for Washington after going 10-11-21 in 48 postseason games with Pittsburgh and 12-14-26 in 73 playoff games with the New York Rangers.

Looking ahead… Hagelin has two more seasons with a cap hit of $2.75 million in each before his contract expires after the 2022-2023 season.  Among forwards age 30-35 with cap hits of $2.5-$3.0 million, he does not stand out in either a good or a bad way (although it is a small cohort).  One does not expect high production values for someone in his role, but this is a place where the Caps might want to get younger if the opportunity presents itself.  The difficulty here, though, is that there is no obvious choice among younger players in the Caps’ system to assume this role at a lower compensation level.

On the one hand, Carl Hagelin is a frustrating player to watch at times.  His superior speed provides him with frequent opportunities to generate scoring chances, often on breakaways.  But finishing those chances is an issue.  On the other hand, he has made himself, perhaps by circumstance, into a penalty killing specialist and a competent defensive player.  But as Caps fans saw in the years leading up to the 2018 playoffs, and then in that Stanley Cup run, a specialist defined so narrowly who does not contribute much at the offensive end, even for a fourth liner and particularly in the playoffs, is difficult to offset with production in other areas in the roster.  He, and his fellow bottom six forwards, do not have to be Gretzky, but they cannot be mere grunts all the time, either.  Hagelin’s ability to improve his offensive production could be an important ingredient in enabling the Caps to advance past the first round of the postseason next year for the first time since winning the Stanley Cup in 2018.

Posted by The Peerless at 6:11 PM No comments: