The Peerless Prognosticator is ON THE AIR!!! -- Caps vs. Oilers, January 13th

As we careen toward the all-star break in less than two weeks, the Caps are of a mind to squirrel away some standings points to tide them over for the rest of the winter heading into spring. And first up on the menu is the Edmonton Oilers, a team that Caps fans don’t see often at Verizon Center, even if it can be a memorable event when they do.

There was the game last year, when Edmonton got out to a 2-0 lead, only to see the Caps storm back with a four-goal second period to take a 4-3 lead, only to see the Oilers tie the game. The shootout went to a 12th round before Matt Bradley hopped over the bench to deliver the game-winner.

The previous visit was the quite the opposite sort of game. Robert Lang scored a goal in the last minute of the first period (assists from Jeff Halpern and Jaromir Jagr – seems like a half century ago they all were here, doesn’t it?), and Olaf Kolzig made it stand up in a 1-0 shutout win.

In fact, the Caps haven’t lost a game at home to the Oilers since January 26, 1997 – a 3-1 loss (Olaf Kolzig dropping the decision to Curtis Joseph in that game). How long ago is that?

- Jim Schoenfeld was the coach for the Caps. Washington has had four coaches since (Ron Wilson, Bruce Cassidy, Glen Hanlon, and Bruce Boudreau).

- Miroslav Satan was 17-11-28 for the Oilers (we’ll see him tomorrow night, in Pittsburgh)

- Kevin Lowe wearing a sweater, not a suit, for Edmonton.

- Pat Peake was still playing for the Caps (sort of…he appeared in only four games that year).

In fact, Edmonton has a rather miserable record against the Caps in Washington. The only worse records the Oilers have as a visitor than their 9-18-2-1 record (.350 winning percentage) against the Caps are against Boston (.258) and Philadelphia (.344).

The other side of that coin is that the Oilers have not won more games on any date in the hockey calendar that January 13th. They are 11-5-1 in games played on that date (matched by the 11-5-1 record they’ve recorded on January 7th – they lost this year, to Vancouver, for what it’s worth).

And, the Oilers have been working in pairs lately…a pair of losses (to Ottawa and Calgary), followed by a pair of wins (over Dallas and the Islanders), then another pair of losses (to Vancouver and San Jose), followed by a win (over St. Louis). This isn’t an exercise in figuring out a Fibonacci sequence, you can do the math here as to what this suggests for the Tuesday game.

As for the other numbers in this one, they look like this… 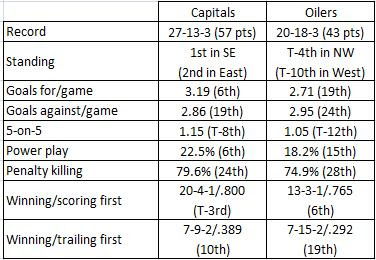 Although the Caps look to have the better of the tale o’ the tape for tonight’s game, Edmonton does one thing very well – once they establish their gains, they hold onto them. They are 9-1-0 when leading after one period, 11-0-2 when leading after two. The trouble for the Oilers in those numbers is that the totals are so low. Ten leads after one period in 41 games; 13 leads after two periods. It’s one thing to perform well with a lead, but it helps to actually get one. Compare those numbers with the Caps, who have led after one period in 21 of 43 games (18-2-1) and after two periods in 23 of 43 games (20-2-1).

In addition to the usual numbers there are the comparison of the “little things,” so to speak, that merit mention here. For example, Edmonton will come into this game having been credited with the fewest hits in the NHL. It isn’t even really close. The Oilers’ 646 hits is 53 fewer (almost eight percent) than Atlanta. The Caps aren’t the biggest boppers in the league, either (15th), but they look like the comparative sledgehammer compared to the Oilers. The Caps also enjoy a 51.6 percent (T-6th) to 47.6 percent (26th) edge in faceoffs, and a 396 (1st) to 259 (18th) edge in takeaways.

So, who are the players leading this team into Washington? Ales Hemsky leads the Oilers in total scoring – 35 points – in only 34 games. Hemsky has looked more like a playmaker than a goal scorer off the right wing fopr much of his career. In fact, he leads the club in assists and is one of the few Oiler top-40 performers in that area (T-23rd). He hasn’t gone more than two consecutive games without an assist this year and is 5-13-18 in the last 16 games he's played. However, Hemsky is on injured reserve (concussion), so his 0-5-5 line in four career games against Washington won’t be making an appearance.

Andrew Cogliano and Sheldon Souray lead the club in goal scoring with 12 apiece (tied for 76th in the league). Cogliano is on a pace to surpass his rookie campaign in goals (18). Souray – in his second season with the Oilers – is on the other end of the experience scale as this is his 11th season. But his dozen goals from the blue line also puts him on a pace to challenge his career best (26) set last year in his first year in Edmonton. He is 5-10-15 in 27 career games against Washington.

Erik Cole will be familiar to Caps fans from his years in Carolina, but he’s been something of an underperformer this year in Edmonton. His 8-9-17 scoring line is good for only 8th on the team, but he’s picked up the pace lately (5-3-8 in his last eight games). He is 15-12-27 in 32 career games against the Caps.

But if the underachievement award for the Oilers might have to go to Dustin Penner. Penner was benched by coach Craig MacTavish for two games in November. In 16 games leading up to the benching, Penner was 3-1-4, +6 (two of those goals coming on opening night). In 23 games since, he is 7-8-15, -4. The benching appears not to have exactly been an epiphany for Penner, but there has been some improvement.

In the sophomore slump department, there is Sam Gagner. After going 13-26-49 in 79 games last year (accompanied by a -21, unfortunately), Gagner is only 4-12-16 this year (although he is on the plus side of the ledger at plus-1). He was also the go-to guy on Gimmicks last year, leading the team in attempts (17) and finding success five times. This year he has taken only three turns in the skills competition, scoring once.

In goal, Dwayne Roloson has played number one minutes over the last 16 games, appearing in 14 of them and starting 13 (he relieved Mathieu Garon in a 9-2 loss to Chicago in the other appearance). In those 14 games, Roloson is 8-4-1, 2.49, .919. He’s been even better against the Caps over his career – 4-2-1, 1.70, .921 and two shutouts in seven career appearances. If Roloson is given a break, though, Mathieu Garon is 2-1-1, 2.48, .907 in four career appearances against the Caps. But, he hasn’t won a game against Washington since November 2003, when he was with Montreal. He was the second star of a 5-3 win, and oddly enough, his current teammate – Sheldon Souray – was first star of that game. Needless to say, we’d prefer not to have a repeat performance.

In his first year in Edmonton, Visnovsky leads all Oiler defensemen in assists (19) and plus-minus (+7), and is second to Souray in goals, power play goals and ice time. What he doesn’t get is penalty killing time (last on the team in average PK ice time per game). So, his contributions are going to be more as the “offensive defenseman” sort. He’s 1-9-10, +3 in his last 11 games, so he has been contributing in that area nicely.

We’re guessing Theodore goes back between the pipes for this one, despite a terrible record against the Oilers, career-wise. Theodore is 5-9-0, 3.69, .872 in 16 career appearances against Edmonton. His experience was even more brutal as a member of the Colorado Avalanche – 1-4-0, 3.83, .860. However, he did win his last game against the Oilers, a 5-4 shootout win last March 28th. If the Caps are going to keep the modest two game losing streak from getting out of hand, it starts from the goal out, and that means Theodore has to reverse the curse against this nemesis.

It’s a big week for the Caps…Pittsburgh on Wednesday and Boston on Saturday. Apparently, there was some looking ahead to Pittsburgh this morning. This is another game that would be easy to overlook, and that’s something no team can afford. If this was just another weeknight-in-January game from a couple of years ago, when 10,000 empty seats might show up, it would really be a worry -- a game against a non-descript opponent in a dead arena. But there will be another big crowd to keep things lively. We think that will give the Caps enough of a lift to go on the road…

Posted by The Peerless at 10:17 PM No comments:

The Sweet Spot -- Where the Caps Make Their Fortune?

That’s what goes on every blackboard in every locker room when playoff time comes around. You can’t win if you can’t play defense. There is another aspect to this that sometimes gets lost. You have to win the tightly fought game, too. Shootouts and track meets are entertaining, but the proof in the pudding is in those 2-1 and 3-2 games teams play – the ones where not a lot of goals are scored and the margins are tight.

The first obvious measure one might take a look at is one you can click to find at NHL.com – “goal games.” There you will find that the Caps are a very good team in one or two goal games (a combined 20-6-5). They’re not so good in the blowouts – 7-7 in games decided by three goals or more.

But there is a perhaps a more subtle way to look at this, too. Can the Caps win “shootouts” – those games where teams exchange goals frequently? It is becoming clear that the Caps, despite their prolific offense, isn’t a team that can win track meets. In fact, there is a “sweet spot” for the Caps in terms of total goals per game for both teams playing. If you break the Caps’ games thus far into total goal segments, their record looks like this:

The Caps are a very average team in games that push past six total goals scored (8-7-1). But in games at or below the NHL average for goals per game, the Caps look like a much more formidable team, especially in those 4-6 goal games where most of the NHL and the Caps seem to live. In that category, the Caps are 14-2-1.

Offense is pretty, but defense – perhaps more to the point, “discipline” – wins games. If the Caps get away from that, if they get into an “up-and-down” mindset in their approach to games, they get away from what has made them successful in the first half of the season. It isn’t too early to get into that mindset that games will be close, that they won’t be goal-scoring bonanzas. Those are the games the Caps can – and do – win.
Posted by The Peerless at 9:06 AM 1 comment: