“Some guys play with their heads. That's okay. You've got to be smart to be number one in any business. But more importantly, you've got to play with your heart, with every fiber of your body.”

Players such as Sidney Crosby, Connor McDavid, or Nicklas Backstrom are extolled for their ability to “think” the game, to see the ice and imagine their options two or three moves ahead.  They probably get insufficient respect for their mental and physical toughness for being able to withstand the punishment they take, often from players like Brenden Dillon.  But then again, players like Dillon might have a reputation for physical toughness but get insufficient respect for their ability to adapt their game to opponent or pick and choose their spots to impose the physical side of their game and rely on their accumulated experience to play angles and position to defend opponents.

Dillon was not that far off his career numbers or rankings in those categories with the Caps this season.  Among 214 defensemen appearing in at least 20 games, Dillon ranked eighth in total credited hits (143), 20th in hits per 60 minutes (8.08), tenth in penalty minutes (49), and there was that net penalty ranking (minus-8/tied for 170th). 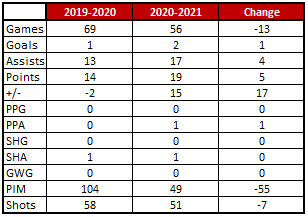 Fearless’ Take… Brenden Dillon might not be an “offensive” defenseman, but when he put up points, they mattered.  Washington won both games in which he scored a goal and went 14-2-0 when he posted at least one point.

Cheerless’ Take… It’s one thing to be a “defensive” defenseman with modest offensive statistics, but c’mon…the only opponent against which Dillon did not record a point was the Penguins?  And it is not as if this is all that unusual.  Dillon is just 0-2-2 in 24 career games against Pittsburgh.

Odd Dillon Fact II… New Westminster, British Columbia has sent 15 players to the NHL.  Dillon is the fifth of that group to have played for the Capitals.  Mark Lofthouse, Colin Forbes, Terry Yake, and Ryan Walter are the others.

Game to Remember… April 9, 2021 vs. Buffalo Sabres.  When the Capitals get off to a good start, one might look to T.J. Oshie (six first goals in games), Alex Ovechkin (four), or Nicklas Backstrom (four).  Brenden Dillon wound not be high on the list of possibilities.  But that is just what happened in an early-April game against the Sabres at KeyBank Center in Buffalo.  In the third minute, the Sabres found themselves chasing the puck, the Caps moving it around from Lars Eller behind the Sabres’ net to Dillon at the right point, back down to the end wall where T.J. Oshie picked it up and moved it out to Justin Schultz, who found Dillon just inside the Buffalo blue line for a one-timer that found its way through a clot of players and past the blocker of goalie Dustin Tokarski at the 2:39 mark.  It was Dillon’s only shot on goal and shot attempt of the game, but it got the Caps off to a good start on their way to a 4-3 win over the Sabres.

Game to Forget… February 4, 2021 vs. New York Rangers.  When the Caps made their way to New York for their first meeting of the season with the Rangers, they carried a 6-1-3 record in their first ten games, but they also had their first regulation loss of the season, a 5-3 loss to the Boston Bruins three nights earlier to break a nine-game points streak to start the season, in their baggage when they arrived in New York.  The Caps dug themselves a hole early, allowing a goal less than two minutes into the contest and were playing catch-up the entire contest.  They did manage to get within a goal at 3-2 11 minutes into the third period on an Alex Ovechkin goal, but what momentum they might have had going into the last half of the third period was dulled by a penalty Brenden Dillon took less than a minute later.  The Caps would not get the equalizer, and the Rangers added an empty net goal in the last minute for a 4-2 win.  But the action did not end at the final horn.  Brendan Lemieux cruised through the low slot to buzz goalie Vitek Vanecek and when they locked up, Vanecek was knocked down.  Dillon came to his goalie’s aid and truculence ensued.  Dillon won this battle, but his line of the score sheet outside of his two penalties was sparse indeed.  In 15:46 of ice time he had one shot on goal and no other marks.

Postseason… Brenden Dillon did something in the 2021 postseason he was unable to do in six previous trips to the playoffs covering 70 games.  He scored a goal.  That came in the second period of Game 1 of the opening round series against the Boston Bruins and proved to be the goal that allowed the Caps to carry Game 1 to overtime when the Bruins tied the game, 2-2, late in the second period.  It would be the only point he recorded in the five-game series loss to the B’s.  At the other end, he was on ice for five even strength goals scored by the Bruins, tied for most on the team, and his minus-4 goal differential on ice at even strength was worst among defensemen.  It was not an unusual outcome.  Since his first appearance in the postseason in 2014, only two defensemen have a worse on ice goal differential at even strength against than Dillon (minus-14) – Roman Josi (minus-20) and Marc Staal (minus-15).

Looking ahead… The 30-year old Dillon has three more years of a four-year/$15.6 million contract to run.  The immediate question is whether his performance matches that compensation level and whether or not the Caps will expose Dillon and that $3.9 million per year contract in the expansion draft.  He is part of a mix of defensemen with different attributes – Nick Jensen and Justin Schultz, for example – that will force the Caps to make a choice on those attributes they find most valuable and/or hardest to replace.

Brenden Dillon is a sort of defenseman that the Caps do not have in abundance on their roster, especially if one assumes that Zdeno Chara will not be returning.  On a team that often plays “big,” he would be the biggest returning defenseman (6’4”/220).  He could be described fairly as a “rugged” defense-first defenseman whereas the Caps have more of the puck-moving/offensive defensemen elsewhere on their roster.  But he has had a disappointing career to date in the postseason, and should he return, that will be a matter to be rectified.

Posted by The Peerless at 7:21 PM No comments: