The Peerless Prognosticator is ON THE AIR!!! -- Caps vs. Devils, October 12th

It’s crisis time in Capitals nation. The Caps have lost three in a row, an unheard of turn of events (psst… they lost four in a row last March).

Well, it had to be part of an off year (nope… they won 50 games and set a club record for standings points).

Well, really good teams don’t have those kinds of streaks (oh?... the Penguins twice had losing streaks of at least three games last year – including a five-game streak – and they won the Cup).

But the Caps’ goaltending stinks (do you even read your own writing?).

Well, the coaching leaves something to be desired (what, exactly?... Bruce Boudreau is 89-43-16 in the regular season).

Well, George McPhee should be fired (uh-huh… what, for taking Nicklas Backstrom instead of Phil Kessel? For signing Mike Knuble and Brendan Morrison? For drafting Semyon Varlamov and Michal Neuvirth?).

Huh..wha… was I sleeping? I was dreaming about a devil on one shoulder and an angel on the other. And a big ugly bird in a hockey jersey… But anyway, tonight the New Jersey Devils visit the Caps as the Caps try to get off their three-game schneid. You would think that the Devils are not a good opponent against which to do that sort of thing. However, the Caps haven’t lost in regulation to the Devils at home since February 25, 2007, when the Caps dropped a 3-2 decision.

And, the Devils have had something of a dicey start of their own. New Jersey is 2-2-0, and oddly enough, the Devils are winless at home (losses to the Flyers and Rangers) and undefeated on the road (wins over Tampa Bay and Florida). But it is a different Devils team, to an extent.

If you compare the roster that skated for the Devils in the last game of the 2008-2009 season – a 4-3 loss to Carolina to close out the Eastern Conference quarterfinal – to the first game of this season, there were six newcomers among the skaters on the Devils’ roster on this year’s opening night:

As a group, they are 2-2-4 (Niedermayer is 2-1-3), minus-7. You could say that the Devils can’t wait to get Patrik Elias back. Elias had arthroscopic groin surgery on September 15th and is due back with the club by late October. In the meantime, the Devils will have to depend on Travis Zajac, Zach Parise, and David Clarkson for their offense.

OK, Clarkson has more of a reputation as a brawler with 20 fights last season (seventh in the league) and 21 the year before (fifth), but he is tied for second with Parise in scoring for the Devils (1-3-4) and has points in each of his last three games, including the game-winning goal against Florida in the Devils’ last outing. And in fact, Clarkson is not merely a brawler. Last year he was 17-15-32 (including three game-winning goals) in playing all 82 games. You underestimate him at your own risk.

One does expect, however, scoring punch out of Zach Parise. The stunt double for Jonathan Taylor Thomas on “Home Improvement” has seen his goal scoring and point totals march forward in each of his four NHL seaons – 14, 31, 32, and 45 goals; 32, 62, 65, and 94 points. And, he’s been durable. In those four seasons he’s missed a total of two games. In 16 career games against the Caps, Parise is 4-8-12, even.

Caps fans might be forgiven if they think of the 2004 entry draft as the draft of Alex Ovechkin, but Travis Zajac was one of four centers taken in the first round of that draft. None have played in more NHL games, not even Evgeni Malkin. You could say that it was a weak class for centers once you got past Malkin, but Zajac has quietly become an offensive cornerstone for the Devils. In three full NHL seasons he’s improved is goals scored from 17 to 20 and his total points from 42 to 62. He’s also been durable, missing only a total of two games in three NHL seasons. Against the Caps, he is 3-5-8, plus-6 in 12 career games.

On defense, the Devils have no one who will put up flashy numbers. No defenseman among the seven who have dressed has a goal this season, and this group has averaged – on an 82-game basis – 4-16-20 for their careers. It isn’t a big hitting group, as these things go, either. Colin White led the team in hits last year with 126, but that was only good for 37th among defensemen in the league. Bryce Salvador was the only other Devils defenseman with more than 100 hits.

OK, they don’t score, they don’t hit. What do they do? Well, they play smart. Paul Martin had the most giveaways among Devils defensemen last year with 43. That was tied for 66th among defensemen. Another way of looking at it – the Devils’ top two defensemen in giveaways (Paul Martin and Mike Mottau) combined for 83 giveaways. Mike Green had 95 for the Caps.

If the Devils don’t play loose with the puck, it makes it that much harder to get quality chances against goaltender Martin Brodeur. Until last season, Brodeur was the league’s iron man in goal. From the 1995-1996 season through 2008-2009, Brodeur topped 4,000 minutes played in 11 of 12 seasons. He had more decisions in overtime in that period than his backups had total appearances.

Then he had his first major injury, a torn biceps tendon in his catching arm. He missed 16 weeks, but upon his return he posted two shutouts in his first three games back. You’d think he hadn’t missed a beat. Well, not so fast. Since that second shutout – a 3-0 blanking of the Flyers on March 1st – Brodeur seems a bit more mortal. Including playoffs, he is 13-11-1, 2.79, .912 since March 1st. Is he enough of a mortal for the Caps to take a bite out of his 33-12-4, 2.08 GAA career record against them?

The Caps, contrary to what you might see in other spaces, are a good team – a very good one, in fact… when they want to be. The days of tolerating the odd week of inconsistent effort and iffy results is over, that is… if this team really wants to be a Stanley Cup contender. Teams have slumps, it happens. But the really elite teams do not have the sort of self-inflicted slumps that come with “ok” -- or worse -- play. Against the Bruins and Red Wings the Caps played good hockey against quality opposition. New Jersey qualifies as “good opposition” and should have the Caps’ full attention. If they do, the Caps can solve Brodeur enough while limiting the less offensively skilled Devils in their opportunities.

The Sky is Falling, Goaltender Edition

It hasn't been a great start for goaltenders.
Posted by The Peerless at 7:51 PM 3 comments:

Email ThisBlogThis!Share to TwitterShare to FacebookShare to Pinterest
Labels: 2009-2010 season, things that make you go 'hmm...'

Of Sticks and Gloves 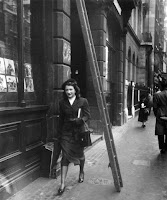 First, it was thought to be the sticks. Now, the gloves. The causes for Mike Green’s woes late last season and early this are a mystery. Well, we here at Peerless Central can’t stand to see a talented player such as Green melt into a puddle of quivering goo over some bad-luck implements of his trade. So, we enlisted the help of an expert in the field of the occult – Eddie Charms. Let me guess, your nickname is “Lucky.”

OK, so… Mike Green. He’s having a devil of a time getting started. No goals, a few tough-to-take penalties. He thought it was his stick, then his gloves. What can the kid do to help get himself out of this mess?

“Well, there are any number of things anyone who is having back luck can do to turn the tide.”

Can you give us some examples?

“Well, there is what baseball players do… they spit on their new bat before using it for the first time to make it lucky.”

Given his picky attitude toward sticks, maybe he’s not going to spit all over them.

“Could it hurt? Shoot, have Ovechkin spit on them.”

He’d probably hurl a snot rocket at them.

“Good point. Well, he could hang a bell in his locker. Demons are afraid of bells, because the make loud noises.”

If that’s the case, he ought to be getting hat tricks at Verizon Center, it’s so loud.

“I noticed he’s sending a lot of pucks to the net from outside the faceoff circles, from along the boards, from up top…”

“Circles… evil spirits can’t harm you when you stand inside a circle.”

Oh, I thought that was going to be some Nylander joke.

“Well, here’s one… if he’s driving to the arena, and he’s singing in his car, tell him to stop.”

And why is that?

“Sing before seven, cry before eleven. Oh, and does Mike cook?”

“Tell him to get some onions and make a wish while he’s burns them on the stove.”

OK, this ought to be good.

“A wish will come true if he makes it while burning onions.”

Maybe he can use his old sticks as kindling for the fire.

“I see where the Caps aren’t practicing this morning.”

That’s right. What’s the significance of that?

“Well, Mike could go to over to Kettler and take a couple of minutes on the ice.”

“You can break a bad luck spell by turning seven times in a clockwise circle.”

Should Nylander show him how?

“Then there are the old standards…”

Really? But isn’t it unlucky to wear opals?

“True… unless you were born in October.”

Mike was born in October… opal. Might be worth a shot. Hah!... get it? Worth a shot.

Well, Eddie, thanks for the tips. Maybe there is something here that Green could use to get himself out of his funk. Although, we’re guessing it’ll be some weird shot that he floats at the net that hits a couple of bodies and sticks before sneaking past the goaltender that will cure his ills.

But spit on the sticks, just in case.
Posted by The Peerless at 8:39 AM No comments: