The Peerless Prognosticator is ON THE AIR!!! -- Game 81: Canadiens at Capitals, April 4th

The Washington Capitals return home for their final two games of the regular season, opening their final home stand hosting the Montreal Canadiens at Capital One Arena on Thursday night.  The Caps, who had a four game winning streak before visiting the Florida Panthers in their last road game of the season, laid an egg, falling behind by a 4-0 margin before dropping 5-3 decision.  Washington does bring a 9-1-2 record over their last 12 home games into this contest.

Montreal has won two in a row and is 6-1-1 in their last eight games, continuing their late-season fight with Columbus and Carolina for the two wild card spots in the postseason.  Center Max Domi has been the leading producer on offense in this late run, his four goals and nine points leading the club over the last eight games.  Domi, in his fourth NHL season and first in Montreal after spending his first three with the Arizona Coyotes, established personal bests in goals (28), assists (43), and points (71).

His game this season has been characterized by balance.  Going 14-21-35, plus-11, at home; and posting a scoring line on the road of 14-22-36, plus-9.  He has been consistent as well, going no more than three games without a point this season.  His contributions have been important to the Canadien cause, the team going 15-7-1 in the 23 games in which he scored a goal this season.  If there is a soft spot here, it is that Domi has not been particularly productive against the Metropolitan Division.  He is 7-11-18, even, in 23 games against the Metro this season, a goal and an assist of that line coming in two games against the Caps.  He is 1-5-6, plus-3, in eight career games against Washington.

The last two seasons have been challenging for defenseman Shea Weber.  He carries the fifth largest cap hit of any defensemen in the league ($7.88 million; source: capfriendly.com) and is signed through the 2025-2026 season, when he will be 41 years old, but he has been absent for long stretches over the past two seasons.  He missed 56 games last season to lower body and foot injuries, and this season he missed the first 24 games to a knee injury that required surgery.

It is entirely likely that the Canadiens will go only so far as goalie Carey Price will take them.  Price has been excellent in the 6-1-1 late season run, starting each of the eight games and posting a goals against average of 2.00 to go with a .933 save percentage and a shutout.  Price is now the grand old man of Montreal Canadiens goaltending, which is saying a lot.  Price is the all-time franchise leader in games played (623), wins (321), is third in save percentage (.918, minimum: 200 games; trailing only Ken Dryden (.922) and Jacques Plante (.920)), and fourth in shutouts (44).  Only Dryden has a better goals against average (2.24) in the post-expansion era that Price (2.47) among goalies playing in at least 100 games. 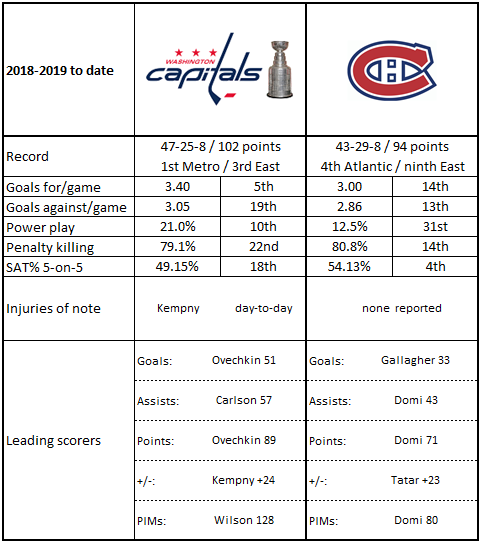 1.  Montreal lights up teams at home with shot pressure, their 36.2 shots per game at Bell Centre leading the league.  But on the road, the Canadiens have managed only 31.6 shots per game, 11th in the league.

3.  The Canadiens have been whistled for only three major penalties this season on the road, second fewest in the league (Anaheim: two).

1.  Washington has seven 20-goal scorers this season, but they still have a chance to have seven players with at least ten goals on home ice.  Jakub Vrana needs one to hit that mark and become the seventh.

2.  The Caps could get nine players with at least 20 points on home ice this season.  Brett Connolly needs one point to do it; Tom Wilson needs two.

4.  Twelve different players have recorded game-winning goals on home ice this season for the Caps to account for the 22 wins in regulation or overtime.

5.  In the stat the team would just as soon not add to, the Caps could finish the season with eight players taking at least ten penalties at Capital One Arena.  Vrana needs one, and Matt Niskanen needs two to reach double digits.  If Vrana goes to the penalty box, he would be the eighth Capital to be charged with at least 20 minutes in penalties at home this season.

If the Canadiens are going to push through and reach the postseason in the last two games, it is probably going to require contributions from next-tier players like Phillpp Danault.  He has not been a big scorer on his own this season, his 12 goals ranking tenth on the club.  But he does have 40 assists (second on the team) and 52 points (third), while his plus-20 ranks second on the club.  It has not been the easiest of paths for Danault to this point, who was drafted 26th overall in the first round by the Chicago Blackhawks in the 2011 entry draft.  He never could break through with the Blackhawks, appearing in only 32 games over two seasons before he was traded back to his home province of Quebec (he was born in Victoriaville) with a second round draft pick for Tomas Fleischmann and Dale Weise in February 2016.

The move agreed with him.  Danault has played in 234 games over four seasons for the Canadiens, averaging almost four more minutes per game with the Habs than he did in Chicago.  His 12 goals this season are one from his career best (13 with Montreal in 2016-2017), and he might have to add to that total for Montreal to have a fighting chance to reach the playoffs.  That 12th goal is the only one he has in his last 24 games, over which Montreal is 11-11-2.  Danault is 0-5-5, plus-1, in six career games against Washington.

Those 17 goals at home are second among the Caps (Alex Ovechkin: 19), his 29 assists rank first, as do his 46 points.  Over a month-long stretch from early February to early March, covering seven games on home ice, Kuznetsov was blistering hot, going 7-7-14, plus-7.  He has cooled off some since then, going 1-3-4, plus-1, in his last five home games, although those three assists came in his last game at Capital One Arena, a 4-1 win over Carolina on March 26th.  Kuznetsov is 4-8-12, plus-1, in 13 career games against Montreal.

Montreal is a tie-breaker (regulation and overtime wins) out of the second wild card spot as of Wednesday morning.  That they find themselves in this position is a product of an impressive 4-2 win over Tampa Bay on Tuesday night.  Given that the team they trail, the Columbus Blue Jackets, have remaining games against two teams looking for the exit – the New York Rangers and Ottawa Senators – they face almost a “must-win” game in Washington before closing out the season at home against Toronto on Saturday.

For the Caps, who are in “tuning” mode getting ready for next week’s start of the postseason, the Canadiens will present a challenge.  Not that the Caps lack entirely for motivation.  A win would clinch the Metropolitan Division title and give them a match-up against the first wild card in the first round, at this point probably the Carolina Hurricanes.  It would be, on the surface, a more favorable matchup than having to face the Pittsburgh Penguins in Round 1 of the postseason.

The Caps have been good (11-4-4), but not great (26 points, tied for seventh with seven other teams) on home ice since January 1st.  But they do have that 9-1-2 record at home over their last 12 contests, so that is a good sign.  Still, even at home against a desperate team, it will be a challenge.