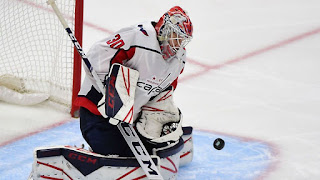 “The Crown. Place it upon your head and you assume a different post-tranquil yet radiating assurance. Never show doubt, never lose your dignity beneath the crown, or it will not fit. It will seem to be destined for one more worthy. Do not wait for a coronation...

It is his net, now.  Braden has gone to Vancouver, Henrik Lundqvist had the misfortune of having to repair a health condition.   What might have seemed a murky issue over the last six months has come into clear focus.  Ilya Samsonov is who the Washington Capital will depend upon to backstop the team to another playoff berth and, hopefully, a second Stanley Cup.  It is a lot for a 23-year old with a grand total of 26 games of NHL experience, none of them in the postseason, to bear.

Those 26 games provided evidence that the Caps were wise to select Samsonov as the first goaltender selected (22nd overall) in the 2015 Entry Draft.  He posted 16 wins, fourth-most among rookie goaltenders in Capitals history.  Those 16 wins represented the fifth instance since 2005-2006 in which a rookie goalie recorded 15 or more wins in 30 or fewer games.  His 2.55 goals against average was fifth-best among rookies in team history (minimum: 15 games), and his save percentage of .913 was also fifth-best in that group of goaltenders.  He became the sixth goalie in Caps history to post a shutout in his rookie campaign and the first to do it since Semyon Varlamov posted a pair of shutouts in 2009-2010.

Samsonov also set an NHL record, becoming the first goaltender in league history to win his first nine decisions on the road, a streak he would extend to ten wins.

Odd Samsonov Fact II… Even with his late season collapse, Samsonov finished his rookie season with the second-best win total in road games (10, trailing only Michal Neuvirth (12 in 2010-2011) among rookie goalies in Caps history, fourth in goals against average (2.55), and third in save percentage (.911).

Samsonov was not just a very good goalie, overall, in the context of being a rookie, he acquitted himself very well among goalies overall.  There were 58 goalies who logged at least 1,000 minute this season (Samsonov had 1,411), and of that group, Samsonov had the 11th-best goals against average (2.55), 25th-best save percentage (.913).  He struggled at the end, but he was hardly alone in going flat after January.  It is here we would remind folks that Samsonov has played a total of 68 games (63 regular season, five postseason) over two seasons in North America.  An optimist might think he is entering the steepest grade on his upward development arc.

The season doesn’t end in January, cuz.  He was 16-2-1, 2.12, .925, with one shutout through January 31st.  That goals against average led the league at the time, and his save percentage was sixth (minimum: 10 games).  After that, though…yeesh.  He went 0-4-1, 4.34, .869 in his last six appearances from February 1st onward.  He had the second-worst goals against average of 74 goalies to dress for at least one game starting February 1st, and only four goalies had a worse save percentage (one of them was David Ayres, an operations manager in his day job who, pressed into service as emergency goalie for the Carolina Hurricanes, allowed two goals on ten shots in 28 minutes while getting a win over the Toronto Maple Leafs in what was among the better stories of the season).

The Big Question… Can Ilya Samsonov handle a number one goaltending burden for a contender?

Let’s face it.  If the answer to this question is “no,” or even if it is “well…maybe,” this season is not going to end well for the Capitals.  And that brings us to an alarming fact.  Samsonov played a full game’s worth of minutes 21 times last season, and there was a clear bright line regarding workload that is worrisome.  He was 11-0-0, 1.54, .941, with one shutout in those 11 full games in which he faced fewer than 29 shots on goal.  However, he was 4-4-2, 3.49, .899 in games in which he faced 29 or more shots on goal.  If Samsonov is going to get number one goaltender minutes, he cannot count on being protected by getting low shot volumes every night, or even particularly often.  Part of his maturation process is how to manage nights when a lot of rubber is flying his way.  Unfortunately, a 56-game season does not provide much chance for a learning curve.

Braden Holtby and Olaf Kolzig are the two best goalies in Capitals history.  Each of them took quite a while to grab the reins of the number one goaltending job permanently.  Kolzig did not do so until his seventh NHL season, and he did so only after an injury to then number one goalie Bill Ranford took him out of the lineup.  Holtby did not become the clear number one goalie until his fifth NHL season, navigating his way around Michal Neuvirth, Tomas Vokoun, and Jaroslav Halak to eventually grab the job by the throat.

Ilya Samsonov is taking over the number one job in his second NHL season, doing it while coming off of injury, and doing it without much of a net under him (the Caps’ backup situation remains a bit muddled, even if Vitek Vanacek, himself having not yet played a game in the NHL, has the job for now).  It explains the Caps spending as much time, effort, and attention on they did to try to shore up the defense in front of him this season.  But in the end, it will be Samsonov who will be the one who has to stop the puck.  He needs to play as if he deserves the crown he now wears.

“Whoever wants to reach a distant goal must take small steps.”
-- Saul Bellow

It all seemed to be falling into place for Washington Capitals defenseman Jonas Siegenthaler.  Drafted in the second round of the 2015 Entry Draft, played another two seasons in Europe, came across to jon the Hershey Bears for a couple of brief stints before getting regular time in 2017-2018, splitting time between Hershey and Washington in 2018-2019, and getting a regular spot in the Caps lineup (64 games) in 2019-2020.  In the normal order of things, Siegenthaler might have built on a solid season last year and added minutes this year to the 15:44 per game he averaged last season.

That might have been a more likely outcome given that among the other five defensemen to dress for 50 or more games for the Caps last season, Radko Gudas left in free agency, and Michal Kempny’s debut in the new season would be delayed significantly as he recuperated from Achilles tendon surgery.  Even the addition of Brenden Dillion and his subsequent re-signing with the Caps did little to change a reasonable assumption that Siegenthaler would take the next step up the ladder of responsibility on the Caps’ blue line.

And then the Caps dropped the bombshell that they signed Zdeno Chara to a one-year contract.  Suddenly, Siegenthaler seemed to have become the seventh defensemen when six dress for most games.  On most nights (mostly when Zdeno Chara needs a break, or another defenseman is dinged up or forgets how to play the position), Siegenthaler would appear to have a reservation for the press-box.

Odd Siegenthaler Fact… Jonas Siegenthaler has played more NHL games (90) than any other defenseman born in Zurich, Switzerland.  Okay, the only other one is Tim Ramholt, and he played in only one NHL game.

Jonas Siegenthaler has come a long way in his brief career to date.  Of 55 defensemen to dress for the Caps in their 22-year old season and younger, he ranks 17th in games played (90); he is tied for fourth in plus-minus (plus-17 with, among others, John Carlson); he is one of only 21 members in that group with at least one game-winning goal (he has one).  He is not an offensive defenseman, at least at this point in his career, but he has shown some glimpses of become at least a credible two-way defenseman.  What he appears to resemble, at least for the moment, is a young, similarly aged Karl Alzner.  There are worse places to be.

We keep taking whacks at this dead horse, but… seven games, no goals, no assists, no points, minus-7.  That was Siegenthaler’s scoring line in the postseason last year (he did not have a point in his last 20 regular season games, either).  He does not yet have a point in 11 career playoff games while averaging 14:40 per game.

There are really two parts to this question.  The first is not so much a question as it is an obvious fact.  If the choice is a young, still growing defenseman or a hall-of-famer to be, even if he is at the end of his long career, for a team with a limited window to compete for a Stanley Cup, the obvious choice is the latter, unless there is nothing left in Zdeno Chara’s tank.  That is not a commentary on Siegenthaler’s skill or potential; he is a victim of circumstance (the Caps’ remaining window of competitiveness) and availability (Chara being available, a contender has to consider adding him).

The second part of the question speaks to Siegenthaler specifically.  His development and advancement has followed a steady upward arc since he was drafted.  Now, he is looking at taking a step backward in terms of the responsibility he assumes in games played, ice time granted, and roles assigned.  Will this have a deleterious effect on his development?  Probably not.  The best spin one might put on this is that Siegenthaler is now in a position to spell any of the bottom four defensemen for whatever reason or circumstance might dictate.

It would be a bit much to say Jonas Siegenthaler has been a “surprise” development in his brief career to date.  He was, after all a second round draft pick in a 2015 draft top heavy with defenseman draft picks (he was the 19th defenseman taken in the first 57 picks).  He had experience in international competition and had a 122-game apprenticeship with Hershey in the AHL before getting full time work with the Caps.  And last season, he led all Caps defensemen in shorthanded ice time per game while also posting a plus-8 differential in goals scored for and against at even strength.  His advancement has been steady, his assigned roles expanding.  That he takes a back seat, or a seat in the press box, at least to start this season is another small step in his development, even if it looks to be sideways instead of forward.

Posted by The Peerless at 2:30 PM No comments: