“Now this is not the end. It is not even the beginning of the end. But it is, perhaps, the end of the beginning.”
-- Winston Churchill

If Nicklas Backstrom was never to play another game for the Washington Capitals, his place in the pantheon of franchise greats would be secure, and he could be counted among the best centers of his generation.  He ranks highly in just about every meaningful career statistical category:

Backstrom’s career with the Caps is not over, though.  Last January, he signed a five-year/$46 million extension that keeps him in the fold through the 2024-2025 season.  By the time that contract is up, he will likely become one of the few 1,200 games/1,200 points players in NHL history (there are currently 38 such players, 32 of whom are in the Hockey Hall of Fame).

Between now and then, Backstrom is in a bit of a nether world of his career.  His best, or at least his most statistically productive days, are probably behind him.  But he remains a creative, industrious player who slots in either the first or second line center position, who remains productive (fifth in total points over the last five seasons, seventh in power play points, 22nd in points per game (of 529 players with minimum: 200 games). 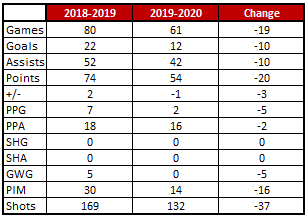 As a first or second line center, he has scoring responsibilities, and when they are met, the Caps are successful.  This season, Washington was 26-10-3 when Backstrom recorded a point, 9-9-4 when he did not.  His personal puck possession numbers were good, posting a 52.5 shot attempts-for percentage at 5-on-5, his best since posting a 52.9 percent in 2015-2016.

These are not big drop-offs, and the recent change might be explained away in part to injury and a changing role in which Backstrom seems to alternate between first and second line center.  But while they’re not big fissures (like that word, Fearless), it’s like I said…cracks.

Odd Backstrom Fact… There have been 39 players in Capitals history to take at least one penalty shot.  But Nicklas Backstrom has played in 956 regular season games over 13 seasons and has never taken one.

Odd Backstrom Fact II… The Caps were 6-1-1 in games Backstrom missed this season.

Odd Backstrom Fact III… 27 points at home, 27 points on the road this season.

Game to Remember… December 20, 2019.  It is a rare thing when two superstars can share a milestone moment.  Rarer still when that moment is precisely a product of their sharing time in competition.  This was the case in late December when the Capitals and the New Jersey Devils met in New Jersey to face the Devils.  It was on that night that Nicklas Backstrom and Alex Ovechkin played their 900th game together as Capital teammates.  It was a night when Ovechkin, even in posting a goal and an assist, would yield the spotlight to Backstrom.

After the Devils opened the scoring on a Kyle Palmieri goal four minutes into the game, Backstrom collected a bump pass from Tom Wilson in the neutral zone and skated down the middle of the ice.  Backing two defenders into their zone, Backstrom gained the blue line and fed the puck off to Ovechkin on his right.  Ovechkin took one step up and wristed a shot from the top of the right wing circle that beat goalie Mackenzie Blackwood on the blocker side to tie the game.  Just 70 seconds later the Caps had the lead.  Tom Wilson outdueled Sami Vatanen for the puck out of the corner to Blackwood’s right and fed it to John Carlson inside the offensive blue line.  Carlson snapped a shot at the net, and Backstrom redirected it out of mid-air past Blackwood’s glove, and it was 2-1, Caps.  Blake Coleman tied the game for the Devils just over four minutes into the second period, but Backstrom put the Caps in front for good just before the second intermission.  Walking the puck out of the left wing corner, he found Dmitry Orlov inching down from the blue line.  Orlov passed on the shot and opted to feed the puck back to Backstrom slicing to the net.  Backstrom redirected the shot past Blackwood, and it was 3-2, Capitals.  Backstrom assisted on a Carlson goal 42 seconds into the third period to compete a four-point night as the Caps rolled to a 6-3 win.  It was the 23rd four-point game of Backstrom’s career.

Game to Forget… March 4, 2020.  Nicklas Backtrom has never had much of a problem being productive against the Philadelphia Flyers.  In 48 career games against the Flyers heading into their March 4th matchup in Washington, Backstrom was 19-36-55, plus-12.  His 49th career game against Philadelphia was not one for the scrapbook.  He skated just 15:19, his third-lowest ice time log for the season, managed two shots on goal, did not record a point, had neither a hit nor a blocked shot, and had a minus-3 rating (tied for his worst for the season) in a 5-2 Caps loss.

Postseason… Given that the Caps went 2-6 in the postseason (round robin and first round series against the New York Islanders), it is no surprise that Nicklas Backstrom did not have a memorable experience.  Worse, it was interrupted by injury when he was blindsided by the Islanders’ Anders Lee after attempting a pass in Game 1 of the first round series against the Isles.  Backstrom returned for Game 5, but it was not enough for the Caps to stave off elimination.  He dressed for five of the eight postseason games and posted a lone assist, seven shots on goal, a 38.7 percent faceoff winning percentage (the worst of his postseason career) and a minus-2 rating.

Next season, Backstrom will enter the first year of a five-year/$46 million contract extension that includes a no-movement clause for the first three seasons and a modified no-movement clause for the last two seasons (source: capfriendly.com).  He is one of four players signed through the 2024-2025 season (Evgeny Kuznetsov, T.J. Oshie, and John Carlson are the others), a number that will likely increase by one when Alex Ovechkin and the club come to terms on an extension.  Kuznetsov, at 27, is the only one of this quintet currently under the age of 30, so this – including Backstrom – is, and will be an aging core for whom the window of being an elite Stanley Cup challenger is closing.

In this space last season, we opined that Backstrom would be “a player in whom one can have confidence that he will continue to be a durable, 70-point or more player.” With 54 points in 61 games this season, he produced at a 73-point pace per 82 games.  But his goal scoring was down, largely the product of his shooting percentage falling under 10 percent (9.1) for the first time since 2013-2014 and his lowest since he posted an 8.9 shooting percentage in 2010-2011.  If Backstrom can restore some of that shooting efficiency, he should be a good bet to continue being a 70-point player.  But there are those “cracks” to consider.

One cannot help but think Nicklas Backstrom is now entering the end-game of his career.  One could envision the contract about to become active will be his last with the club (he would be 37 when it expires).  But given the lack of depth at center in the Caps’ organization, he is also likely to be the first or second line center well into this contract, if not for entire length of it.  The Caps’ chances to compete for another Stanley Cup will depend in large part on Backstrom’s ability to maintain the consistency he has displayed over the length of his career to date.

Photo: Patrick Smith/Getty Images North America
Posted by The Peerless at 8:00 AM No comments: