Washington Capitals: That Was The Week That Was -- Week 21

For the Washington Capitals, Week 21 was eventful on and off the ice.  It was a full week of games with four on the schedule, the end of the line for a couple of Caps, a chance to welcome a couple of newcomers, and the end of a long wait for a prospect from whom so much is, if not expected, then hoped for. The Caps started the week two points ahead of the Columbus Blue Jackets for fourth place in the Metropolitan Division and a point behind the Detroit Red Wings for the eighth spot in the playoffs.  They also had an opportunity, with two games against the Philadelphia Flyers, also just a point ahead of the Caps in the Metropolitan Division, to leap frog the Flyers and push them out of a playoff spot.

It did not work out that way.  The Caps opened the week dropping that pair of games against the Flyers, the first in overtime.  Then they were shutout in Boston by the Bruins and were seemingly on their way to a similar fate at home against Phoenix before coming back with a three-goal third period to beat the Coyotes, 3-2, and salvage the end of the week.  As it is, the Caps are still a point behind Columbus for fourth place in the Metropolitan Division and a point behind Detroit for the last playoff spot in the Eastern Conference. 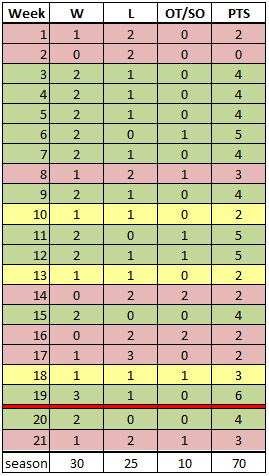 Eight Caps split the 11 goals for Week 21, Dmitry Orlov, Troy Brouwer, and Brooks Laich each getting a pair to lead the club.  Fifteen Caps recorded points, Mike Green going 1-4-5 to lead the way.  If there was an odd part to the week it was that the usual top-line suspects of Nicklas Backstrom, Alex Ovechkin, and Marcus Johansson combined for two goals in four games (Johansson, Ovechkin) and a somewhat light total of six points.  The defense chipped in more than their share, though.  Five different defensemen – Orlov, Green, Jack Hillen, John Carlson, and Karl Alzner – combined for four goals and 12 points for the week.  Defensemen were credited with points on 10 of the Caps’ 11 goals for the week.

It seems that we are back to the shots issue with this club.  The Caps allowed opponents 30 or more shots in each of the four games in Week 21, an average of 35.5 a game.  Their 33.5 shots allowed per game is fourth-highest in the league, although it is a characteristic of this club that does not seem to concern management.

If shots don’t concern the club, the poor possession numbers this week should.  Actually, the numbers would have had to be better to be considered “poor.”  At 5-on-5, whether overall, tied, or in close-score situations, the Caps failed to clear the 50 percent mark in either Corsi-for or Fenwick-for percentage for the week.  In 5-on-5 close score situations the Caps were under 40 percent for the week (Corsi: 38.0; Fenwick: 36.5).  Here is the odd part, though.  In 28 games this season the Caps have been 50 percent or better in Fenwick-for percentage in 5-on-5 close score situations.  Their record is only 11-11-6 in those games.  The Caps, blazing a trail as fancystat contrarians.

Four games, three goaltenders, one win.  Not a happy state of affairs this week.  It was an especially difficult week for Braden Holtby, who went 0-1-1, 4.28, .885 in three appearances.  The Flyers abused him for nine goals on 54 shots in 94 minutes of work over two games.  The five goals he allowed in the first game against the Flyers and the four he allowed in less than 32 minutes in the second game against Philadelphia made it eight times in 15 appearances that he allowed four or more goals in a game.  He clawed back with a fine 40 save performance against Boston, but it was wasted by a lack of offense in a 3-0 loss to the Bruins.

Philipp Grubauer, who was called up when Michal Neuvirth was traded to Buffalo for goalie Jaroslav Halak, relieved Holtby in the second game against the Flyers and was 10-for-11.  It might have been mop-up duty but for a furious Caps comeback in the third period.  However, it was the goal he allowed that was game-winner, pinning him with the 6-4 loss (Philadelphia added an empty net goal).

Halak won in his first start for the Caps, a 3-2 win over the Phoenix Coyotes on Saturday night, stopping 31 of 33 shots, including the last 22 he faced to allow the Caps to erase a 0-2 deficit to win, 3-2.

For the week the Caps scored four goals on 20 shots.  Nearly half of those shots came from Alex Ovechkin (1-for-8 for the week), while no other Capital had more than two shots on the man-advantage for the week.

The best thing that can be said for the penalty killing this week is that the Caps weren’t asked to do much of it.  Not that they killed a lot of what they did face.  The 55.6 percent penalty killing rate was the Caps’ worst for a week this season.  Only in Week 12, when they allowed five goals in 17 shorthanded situations, did the Caps allow more goals (they have allowed four in a week on two other occasions).

It could have been worse, too.  Opponents pounded the Caps for 23 shots on goal in just 14:05 of power play ice time.  It was a case of goaltenders being the best penalty killers because of the inability of those in front of them to prevent teams from raining shots on goal.

The second periods of games were, if anything, worse.  The Caps allowed goals in the middle frame in all four games but did not record a goal of their own in either of the last two games of the week.  The Caps won the third periods for the week by a 6-5 margin, but what they won (a three goal third in their 3-2 win over Phoenix) they lost, too.  Both times they allowed two goals in the third period came against the Flyers, last Sunday when the Caps lost a two-goal lead and lost in overtime, again when the second goal by the Flyers in the third period stunted a comeback in a game the Caps would go on to lose, 6-4.

It was a busy week, NHL trading deadline week.  The Caps were busy with low-impact trades.  They swapped out goaltenders, Jaroslav Halak from Buffalo with a draft pick for Michal Neuvirth and Rostislav Klesla, who they obtained from Phoenix with forward Chris Brown for Martin Erat.  The Caps also picked up winger Dustin Penner from Anaheim for a fourth round draft pick.  Penner and Halak are on expiring contracts, and Brown is on an entry-level deal that expires after the 2014-2015 season.  If nothing else, the Caps have cleared salary cap room for next season, more than $16 million if the cap rises to $71 million, according to capgeek.com.

The Caps also welcomed their 2010 first round draft pick, Evgeny Kuznetsov, into the fold, signing him to a two-year contract upon his KHL season being completed.  Kuznetsov, who appeared in his first Capitals practice earlier today, could make his debut at Verizon Center on Monday against Pittsburgh.

On the ice in the here and now, though, the Caps are lucky they did not lose more ground to the teams immediately above them in the standings.  On one hand, from the “glass half full” perspective, the Caps are still 2-2-1 to start their 14-game stretch through the most difficult part of their schedule this season with contests against Boston (three times), Philadelphia (twice), Pittsburgh (twice), Los Angeles (twice), Anaheim, and San Jose being among the teams they face over that stretch.  From the “glass half empty” perspective, the Caps gave away as many as three points with a poor third period against Philadelphia and then failing to answer the bell coming out of the gate in the rematch against the Flyers, digging a 4-0 hole out of which they could not climb in a 6-4 loss.  They have to start doing more than treading water, specifically grabbing points that one might not pick them to get in the next three weeks.  If they don’t, then when the schedule lightens up, the Caps might be playing out the string, not fighting for a playoff spot.

Posted by The Peerless at 10:43 AM No comments: