The Peerless Prognosticator is ON THE AIR!!! -- Game 69: Minnesota Wild at Washington Capitals, March 14th

The Washington Capitals are in the midst of their first true crisis of the season and look to end the troubles when they return home to face the Minnesota Wild on Tuesday night.  Ten days ago, this game had the promise of featuring two teams at the top of their respective conferences and perhaps favorites to reach the Stanley Cup final.  When they take the ice on Tuesday, both teams will have found themselves coming back to the pack in the standings and just two among what are now many who could credibly be thought of as Stanley Cup final contenders.

The Caps have lost four in a row in regulation, the first time that has happened since Games 8-11 early in the 2014-2015 season, and they are 5-6-1 since coming back from their league-sanctioned in-season vacation.  Meanwhile, the Wild have lost three of four and are 4-4-0 in eight games since their own six-day break.  For both teams, their respective conference leads have fallen to one point, the Caps one point over Pittsburgh (pending Monday night’s results), and Minnesota is one point ahead of Chicago.

Devan Dubnyk might be on a short list of Vezina Trophy contenders as the league’s top goalie, but it did not make him immune to what happened on Sunday against the Chicago Blackhawks.  After getting the win in 20 minutes of relief of Darcy Kuemper in a 7-4 win over Florida last Friday, Dubnyk got the start against the Blackhawks on Sunday.  He lasted less than five minutes.  Two shot, two Chicago goals, and Dubnyk got the hood from head coach Bruce Boudreau 4:38 into the contest.  No, it was not the shortest time on ice of any goalie in any game in Wild history, but he couldsee it from there.  Still, Dubnyk leads the league’s goalies in wins (36, tied with Columbus’ Sergei Bobrovsky), is third in goals against average (2.07), is second in save percentage (.931), is tied for fifth in shutouts, and is sixth in minutes (3,103).  If Dubnyk gets the call in this game and wins, it will set a new career high in wins.  It will not be easy, based on his history.  Dubnyk is 2-3-0, 3.24, .891 in five career appearances against the Caps. 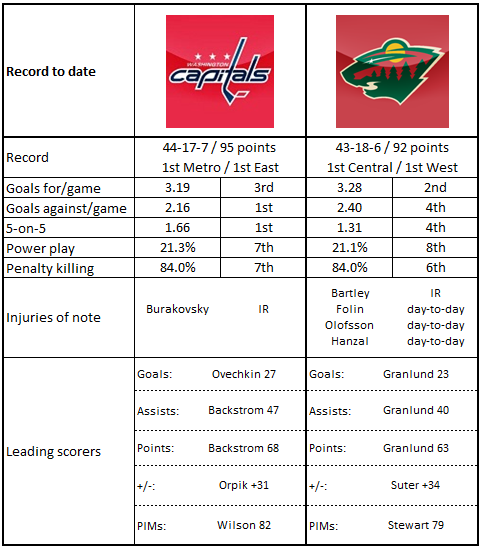 1.  The Wild have had the better of the underlying numbers since their break, sporting a 54.06 SAT percentage in their eight games since the hiatus (numbers from NHL.com) and a 54.5 percent in shots on goal for/shots on goal against.  The problem is in efficiency.  The Wild are shooting at 8.8 percent in those games, while their opponents are shooting at 10.5 percent.

2.  Special teams have been uneven for the Wild since their break, their power play barely registering at 2-for-23 (8.8 percent) and 0-for-their-last-9 over four games (those opportunities are infrequent, too).  On the other side, the penalty kill is 19-for-21 (90.5 percent) and hasn’t faced more than three shorthanded situations in their last five games (12 in all).

3.  One might think that a team as high in the standings as the Wild would be adept at locking down wins when leading late in games, but they have left some points on the table when leading after two periods.  They rank 15th in winning percentage (.848) when leading after 40 minutes (28-3-2).

4.  Minnesota is tied for the league lead in goals scored at 5-on-5 (154, tied with Pittsburgh).  Four-on-four is a different story.  The Wild scored one goal in that situation this season.

5.  The Wild have the third-best penalty differential at 5-on-5 in the league (plus-31, tied with Philadelphia; go figure).  Only Detroit (plus-41) and Pittsburgh (plus-33) are better (numbers from Corsica.hockey).

1.  Since February 1st, 434 skaters in the NHL have an even strength goal.  Alex Ovechkin is not one of them.

3.  Since the February break, which Capital leads the team in scoring the first goal of the game?  If you said Jakub Vrana and Tom Wilson (twice apiece), buy a lottery ticket.

4.  The Capitals do not have a penalty shot attempt this season.

5.  Washington no longer has the worst penalty differential at 5-on-5, but they’re in the same zip code.  Their minus-35 is better that only the Colorado Avalanche (minus-40).

Being strong down the middle is generally thought to be a prerequisite to success in the NHL, and the Minnesota Wild tried to improve on their center depth with the acquisition of Martin Hanzal from the Arizona Coyotes at the trading deadline.  Much like the Caps’ acquisition of defenseman Kevin Shattenkirk at the trading deadline, obtaining Hanzal served, if nothing else, the purpose of keeping him away from other contenders.  What Hanzal is, is a solid half-point-per-game player who brings size (6/’6”, 225) and an ability to play defense.   He has had a bit of a time finding his stride in Minnesota, though.  In seven games since joining the Wild he has yet to record a goal (four assists) and is a minus-2.  Even faceoffs, a solid part of his game (over 54 percent in each of the last five seasons, including his time with Arizona this year), are underwhelming so far (47.3 percent).  He does get a wide range of responsibilities, being one of four Wild forwards averaging more than one minute of ice time per game on both power plays and penalty kills since his arrival.  However, he did miss Sunday’s game against Chicago with an illness and is listed as day-to-day.  Hanzal is 1-3-4, plus-1, in seven career games against Washington.

Part of the problem with the Caps since their February break has been injuries.  T.J. Oshie, for instance, has appeared in just eight of 12 games since the break, and while his production in those games (3-5-8, tied for second in goals and tied for fourth in points on the club) is roughly in line with his production before the break, he, like much of the team, seems about five degrees off center.  He is a minus-2 since the break (he was plus-25 before it) and has six penalty minutes in eight games (he had 26 in 47 games before the break).  The odd part of his post-break performance is that in three games in which he has goals, the Caps lost two of them, the only two times this season the Caps lost games in regulation when he scored a goal (19-2-1).  This could be a game for Oshie to break out.  In his last 14 home games he is 9-8-17, plus-14.  He has four goals in his last four home contests.  Oshie is 7-10-17, plus-3, in 23 career games against Minnesota.

This game is, at this point, less a potential preview of a Stanley Cup final and more a study in which team can right itself quicker from their break.  Both clubs have seen their momentum before their respective breaks slammed to a halt and are at risk of falling from the top spot in their conference standings (for the Caps, that might be true by the time puck drops on this game).  How these teams got into their predicaments are a little bit different.  The Wild have been uncharacteristically leaky on defense (2.78 goals allowed per game since their break), while the Caps have lost their compass in finding the back of the net (2.17 goals per game).  It is a game of the moveable object meeting the resistible force.

Posted by The Peerless at 7:49 PM No comments: