Week 12 was an up-and-down week for the Caps, mostly down with two big losses sandwiched between two tight wins.  Nevertheless, the Caps did finish the week with the best record in the East Division, but they are hanging on by a thread to that top spot, by a tie-breaker over the New York Islanders. 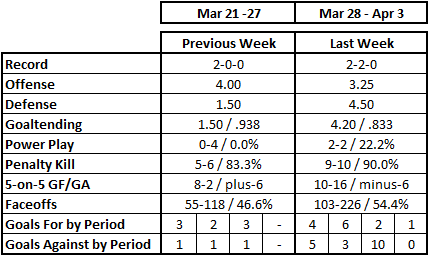 It was the worst week, record-wise, for the Caps since Week 6, when they also went 2-2-0.  In the intervening five weeks they were 14-2-1, so perhaps a correction was due.  The problem was that even with a lackluster 2-2-0 record for the week, the week was worse than that.  A three-goal loss and two one goal wins, one of them coming after the Caps took a 3-0 lead into the final period, to teams well below them in the standings (New York Rangers and New Jersey Devils), plus their worst loss of the season – an 8-4 shellacking by the New York Islanders – made for a more disappoint week than the record would suggest.  When one considers that the last 11 games on the Caps’ regular season schedule include seven against playoff-eligible teams and a pair against a Rangers team against which the Caps have struggled, leaving points on the table in Week 12 is something the Caps cannot afford to repeat next week. 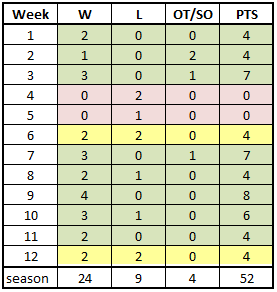 The Caps did not lack for offense, although it was a bit top-heavy in Week 12.  John Carlson and T.J. Oshie (three goals apiece) accounted for almost half of the 13 goals the Caps scored in four games.  Six other Caps had goals, Tom Wilson among them with the only other multi-goal week (two).  There was more balance in the point production, 16 of the 19 skaters to dress for the week posting at least one.  Oshie led the point-getters with five, followed by John Carlson (four).  Nicklas Backstrom, Dmitry Orlov, and Tom Wilson had three points apiece.  Three Caps finished the week with double-digit totals in shots – Alex Ovechkin (13), Oshie (12), and Wilson (11).  All 19 skaters dressing for the week had at least one.

As a group, the Caps were reasonably efficient shooting the puck, finishing the week with an 11.2 shooting percentage, ninth-best in the league.  Individually, seven Caps were over ten percent, John Carlson leading all skaters with three goals on eight shots, a 37.5 shooting percentage.  T.J. Oshie (3-for-12/25.0 percent) and Nic Dowd (1-for-5/20.0 percent) finished at 20 percent or better.

If there was an odd fact about the Caps’ offense in Week 12, it centered on Brenden Dillon.  He had only one point for the week (an assist) but he was on ice for more even strength goals than any other Capital (seven), and there is more to this story below.

Where did it all go wrong?  The Caps had a decent week in limiting shots on goal (29.0 per game, tied with the Islanders for 11th-fewest).  And although they allowed more shot attempts at 5-on-5 (168) than any other team except Minnesota (170), they were tied for the 13th-fewest shot attempts allowed at fives per game (42.0, with Detroit).

Where it breaks down is in the quality of chances.  Only two teams allowed more high danger scoring chances in Week 12 than the Caps (41),   and they were far and away the worst team in allowing goals in high danger scenarios (14), almost double the total Boston had (eight).

Bad defense was not bailed out by good goaltending.  Vitek Vanecek had the better week, but it was nothing to put in the scrapbook.  In just under 140 minutes of work over three games, he went 1-1-0 (one no-decision), 3.01, .879.  it was a case of starting and finishing poorly.  He stopped 21 of 24 first period shots (.875 save percentage) and 14 of 17 third period shots (.824), which more than negated a fine performance in second periods (13-for-14/.929).  He did make up some of the misery with a fine overtime performance against New Jersey in which he stopped excellent chances from Travis Zajac and Jack Hughes to give the Caps an opportunity to win and grab a needed extra standings point.

Ilya Samsonov had a week he might like to forget, and given the circumstances might have little memory of some of it.  He recorded (earned seems a bit much) the win to open the week, a 5-4 win over the Rangers, but he allowed four goals on nine shots to make what should have been a laugher a nail-biter.  That was the better of his two games for the week.  Against the Islanders on Thursday, he collided with T.J. Oshie behind his own net and was dazed, going off to clear his head.  He would return to action with the Caps down, 2-1, and endured a barrage over the remainder of the contest that ended with him allowing six goals on 24 shots.  For the week he stopped only 34 of 44 shots (.773 save percentage) and played to a 5.81 goals against average.

Reasonably efficient on a per-opportunity basis, but the recurring theme is “too few chances.”  The Caps’ 2.25 chances per game in Week 12 ranked tied for 21st in the league and below their 29th-ranked average of 2.46 chances per game for the season.  This week, they just could not finish.  Recording 17 shots in 13:27 of power play time is a pretty good shots-to-minutes rate, but two goals on those 17 shots?  One expects more efficiency from a power play with this much talent than 11.8 percent.  That is below their league-leading overall shooting percentage (12.1 percent).

What success the Caps did have came the middle of the power play setup, something they have seemed to lack of late.  T.J. Oshie had both power play goals for the Caps for the week.  On the other hand, it has been a while since Alex Ovechkin has had one.  His streak without a power play goal reached eight games at week’s end. 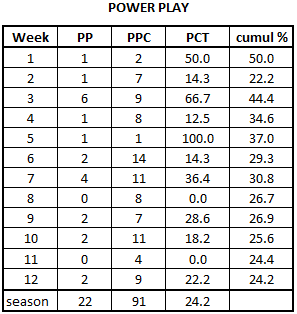 The Caps were better on this side of special teams.  It might have been the best area of play overall for the week.  Nine of ten shorthanded situations killed.  Only 2.50 chances allowed per game (tied for 13th-fewest in the league).  Only five shots allowed in 17:34 of shorthanded ice time.  The only blemish was a late power play goal in the first game of the week that made things too interesting at the end of a 5-4 Caps win over the Rangers. 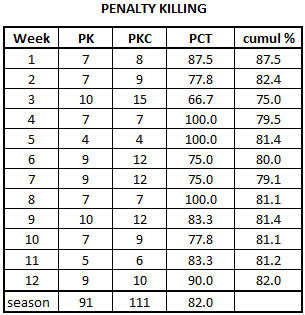 Week 12 was an example of the idea that faceoffs, in general, don’t really matter much in the larger scheme of wins and losses.  The Caps had the third-best faceoff winning percentage for the week (54.4 percent) but finished with a .500 week in wins and losses.

Individually, it was a good week for Caps taking more than ten draws.  Only T.J. Oshie, who won nine of 20 faceoffs, finished under 20 percent among the five players in that group.  But there was that offensive/defensive zone issue.  Only Nic Dowd among the five won more than 50 percent of his offensive zone draws, but he took only five (4-for-5/80.0 percent).  On the other hand, the four players in that group of five who took defensive zone draws (Oshie took none) all finished over 60 percent in the defensive end. 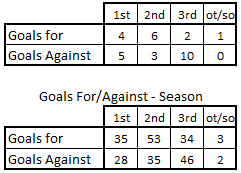 The 2-2-0 week left the Caps still behind last year’s club at similar points of the season.  If there is a big difference in any year-over-year category that merits attention, it is in the 5-on-5 shot attempts generated.  This year’s Caps are running 7.6 percent behind last year’s club in this category, and they are not making it up with a proportionate reduction in shot attempts allowed at fives.  In other categories, the Caps show evidence of better discipline.  First, they seem to be managing the puck better, the volume of giveaways with which they are charged being 28.7 percent lower than at a similar point last season.  Then there are the penalties, down 18.9 percent from last season, and the penalty minutes, down 20.2 percent from last year. 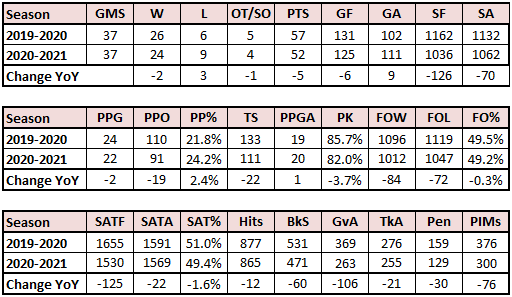 Losing to the Islanders on Long Island is not a completely unexpected result.  The margin of victory and breadth of the defensive collapse were.  But that aside, losing to the Rangers has become an unwelcome habit, one that could cost the Caps the top spot in the East Division when the points are tallied at the end of the season.  The Caps are entering what looks to be a portion of the schedule in which they have to earn points consistently against weaker teams.  Over their next eight games, five will be against clubs not currently playoff eligible (Philadelphia and Buffalo twice, and New Jersey).  Come out of that with a record similar to what the Caps had this week, and an East Division title might prove out of reach.