In early April, thoughts of seeding come to mind. No, not seeding the lawn, although we have to get around to that, too, but seeding of playoff teams. And in looking at the seeds, one wonders if there isn’t something in there akin to the infamous 5-versus-12 thing you often see in the NCAA men’s college basketball tournament where the lower-seeded team pulls off the upset.

It turns out that at first glance, there is something like that in the NHL. And, it just so happens that it is the 2-versus-7 matchup that has potential for upsets. Going back through ten seasons worth of 2-versus-7 matchups in the Eastern Conference, we see the following results: 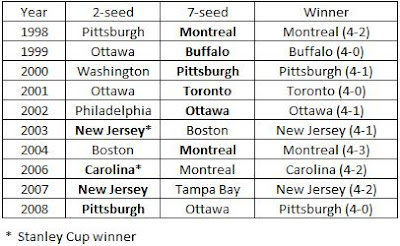 There are several things to note here. First, there is the matter of the 7-seed coming out on top in six of ten instances. That is rather amazing in itself. But also note that the first five occasions took place in the first five years of this ten-year window.

Then there is the matter of the matchups themselves. In four of the six occasions in which the lower-seeded team won, the teams were divisional opponents (Pittsburgh and Montreal were members of the Northeast Division before the NHL went to a six division format in the 1999-2000 season). Lower-seeded divisional rivals, who are more familiar with each other, appear to have been unfazed by the matter of seeding and who beat whom in the standings.

It doesn’t appear that regular season records have much to do with the results of the 2-versus-7 matchup. Five times the team that lost the season series won this playoff series. Incredibly, Buffalo swept Ottawa in 1999 after failing to win a single game in their regular season series (in an odd twist of history, Ottawa only won once, and that in overtime; there were four ties).

There has been a strange lack of suspense in the 2-versus-7 matchup, if by “suspense” you mean a game 7. In the last ten years in the East, there has been one game 7 in this matchup, that coming in 2004 when Montreal defeated Boston, 2-0. Of course, Montreal was the lower-seeded team. In fact, this has more often than not been a quick-work round of games. In six of the last ten years, the series has gone only four or five games, and in four of those the lower-seeded team won.

Who wins when during the series does appear to matter, though, although perhaps one shouldn’t read a lot into it. Seven times in ten instances, the team that won Game 1 won the series. Four times, it was the lower-seeded team turning the trick, but all four of those instances occurred in the first four years of this ten-season window. But here is the one to watch – Game 3. In nine of ten instances the team that won this game won the series. The lone exception was when Tampa Bay defeated New Jersey, 3-2, in Game 3 of the 2007 series, then lost to the Devils in six games.

The methods geeks will say that ten games is an insufficient sample size to draw any clear conclusions. Add in that teams change, turn over their rosters, etc., and there is more noise added to this kind of a look. But there is a point to be made here, and it is this – there are no easy paths to the Stanley Cup, not even a two-versus-seven matchup. For the Caps, what the last ten years of history suggest is that of the five teams below them that they could realistically face in a two-versus-seven matchup, they stand to have more success against the Rangers (3-0-1 against them this year), Pittsburgh (3-0-1) or Montreal (3-1-0). They would appear to want to avoid the Flyers (2-2-0). The team they do not want to face is their Southeast Division foe Carolina, against which the Caps are 3-3-0 (Carolina winning the season points battle by virtue of earning a point in a 5-4 shootout loss on March 14th).

Still, a 14-6-2 record against the five team group from which the first round opponent could emerge is a favorable sign for the Caps heading into the second season.

But that two-versus-seven history offers a warning – “beware what you wish for…”
Posted by The Peerless at 11:22 PM 2 comments:

Avery's at it again

He must be warming up to play against "Fatso"...

It did not have the intended effect, apparently. Tim Thomas shut out the Rangers, 1-0.
Posted by The Peerless at 8:45 PM 1 comment:

[OK…so here is what we would have written, had not our interwebnets provider not decided that their service didn’t need a vacation. We’d name the culprit, but we are not given to such Bombast, if you catch our drift]

A local restaurant franchise offers Capitals fans free chicken wings if the Caps score six or more goals in a game. The Peerless wonders, if the Caps score seven, but three of them are by their own sticks or body parts into their own net, does that count toward free wings?

That was the story last night as the Capitals earned a point and won the Southeast Division title, but dropped a 5-4 overtime result to the Buffalo Sabres in a game where Semyon Varlamov was superb when facing actual shots off Sabre sticks. He just couldn’t cope with shots that: a) deflected off of Milan Jurcina’s skate, b) ricocheted off Viktor Kozlov’s stick blade, and c) took a hop off Shaone Morrisonn’s leg among the five goals credited to the Sabres. His save percentage was .926 on 25 saves in 27 shots faced from Buffalo shooters; it was .000 – no saves in three shots faced – against his teammates.

It was a weird night all around…

- Tim Connolly missed a wide open net from about 18 inches out in the first minute of the game. Bruce Boudreau alluded to this in the post game when he remarked that things – missed open nets and shots off your own guys for goals – tend to even out. Not in Capsville, Coach…not in Capsville.

- The linesmen (Pierre Racicot in particular) had a really bad night calling offsides. They missed no fewer than three instances in they whistled the Caps for the infraction when a Cap had in fact kept the puck in the zone. How do we know this? Because there was in-house replay of each instance. We wonder if the league isn’t going to tell the Caps to knock it off and stop showing up the officials.

- And The Peerless wonders…a Cap and a Buffalo player get tangled up and roll into the goalie, all three knocking the net off it’s pegs. The Cap is down and on his back. The Buffalo goalie takes a swat at the Cap lying on the ice. The Cap gets the gate for goaltender interference. What, Alex Ovechkin’s face interfered with Ryan Miller’s glove?

- Tomas Fleischmann had only a single assist, but it was a doozy. As Buffalo was trying to clear the puck out of their end, Fleischmann – parked near the Buffalo line – dove and poked the puck across to Sergei Fedorov, who ripped a shot past Ryan Miller. Fleischmann, perhaps more so than in any game this year, asserted himself in the corners and along the boards. He initiated contact instead of letting guys push him around.

- Sergei Fedorov – a veteran of 1,243 NHL games heading into last night – made a rookie mistake in overtime, trying a risky pass in a 4-on-4 situation with a Sabre bearing down on him. Tim Connolly broke up the play and fed a streaking Jason Pominville, who skittered past the last man back – Jeff Schultz – and snapped the puck through Varlamov’s pads for the win.

- Speaking of Fedorov, things happened when he was on the ice. He took 24 shifts last night and in half of them, the shift ended with either a goal (three for each side) or a penalty.

- Alex Ovechkin had a 1-2-3 night…and still finished minus-2. The good with the bad.

- The Caps were 3-for-7 on the power play, but one had the feeling they should have had more…like that 5-on-3 in the second period in which they failed to score in both the 5-on-3 and the 5-on-4 segments.

- If you want a thrill ride, don’t head to Kings Dominion or Six Flags America…watch Semyon Varlamov handle the puck. Between wondering if he’s going to take a wandering penalty (he’s already been whistled for handling the puck outside the Trapezoid of Despair this year, and he came close a couple of times last night) and watching him cough it up (he had four giveaways last night…the Caps don’t have than many giveaway promotions in a season), The Peerless had his heart in his throat each time Varlamov was trying to play the puck. Hey, he’s a rookie…he’ll get better.

- The Caps had a game plan with which The Peerless agreed entirely. Buffalo is not a big team. They’re built for speed and quickness. The Caps, on the other hand, are among the bigger teams in the league. So, the Caps “tenderized” the Sabres pretty well last night in an effort to wear them down. Washington had 24 hits, many of them of the slobber-knocker variety. Milan Jurcina had five hits…Alex Ovechkin had four. Shoot, even Jeff Schultz had three. For heaven’s sake, Tomas Fleischmann had three! It woulda been a great game plan, except for that pesky detail about scoring into your own net.

- The Alexes had 18 shots between them – nine apiece.

- Speaking of shots, the Caps had 37 on goal, but only from 11 skaters. No shots from forwards Viktor Kozlov, Eric Fehr, and Tomas Fleischmann – all of whom are predominantly offense-oriented (and who combined had only three shot attempts) – is equal parts weird and disturbing.

Both teams got what they wanted – Washington got a point to clinch the division and no lower than a three-seed for the playoffs; Buffalo got the extra standings point they desperately needed. But only one team got what they needed. Buffalo got a breath of life and kept their dim playoff hopes alive in a building where the Caps don’t lose often and rarely lose when scoring first.

The Caps, on the other hand, got the bitter taste of a clinch in a loss. It was a far different ending than the manner in which they clinched the division last year. In the post game radio show, it was reported that to a man, the Caps were not happy. Coach Boudreau certainly sounded equal parts subdued and unhappy in the post game comments. The thing is, the Caps outplayed the Sabres in just about every way. Except for the odd bounce that makes hockey “hockey,” this game wouldn’t have been competitive.

Congratulations to the Caps on winning the division for a second consecutive year. However, it’s a measure of what is expected this year, and the standards the club applies to itself, that no one is shouting about it this morning (which is now evening, thanks to our interwebnets provider).
Posted by The Peerless at 5:59 PM 1 comment: