The Peerless Prognosticator is ON THE AIR!!! -- Game 49: Capitals at Panthers, January 25th

The Washington Capitals will try to avoid a season-high fourth consecutive loss on Thursday night when they visit the Florida Panthers in Sunrise, Florida. The Caps will also be looking to halt a disturbing trend on the offensive side of the ledger, having seen their goal total drop by one in each successive game since their last win, a 4-3 decision over the Carolina Hurricanes on January 12th. Were the trend to continue, the Panthers would pitch a shutout in this one.

Pitching a shutout seems unlikely. Since beating the Montreal Canadiens in a 2-0 shutout in the last game of the 2017 portion of the season, Florida has not allowed fewer than three goals (including Gimmicks) in any of the eight games they have played so far in the 2018 portion of the schedule. They have allowed 32 goals in the eight games (not including Gimmicks) while scoring only 22 of their own, almost a third of them coming in a 7-4 win over the St. Louis Blues on January 9th.

The goals allowed shines a bright light on the Panthers’ goaltending. Roberto Luongo has been out of action since December 4th with a lower body injury, and the team is targeting early February for his return.  That has left the netminding duties to James Reimer and Harri Seteri. In the eight games played by the Panthers in the new year, Reimer received the call to start seven times with a 2-3-1 (one no-decision), 3.33, .900 record. Sateri is 0-2-0, 4.82, .861 in three appearances over the same period. They have struggled under some heavy shot loads, facing a combined average of 33.7 shots per 60 minutes over those eight games. Reimer was injured in a fall early in Florida’s loss in Dallas on Tuesday, going out less than four minutes into the game. If he cannot go, Sateri would get his first action against an Eastern Conference team in his career. The rookie, who was originally a fourth-round draft pick of the San Jose Sharks, has three games on his career record, having faced Dallas, the Minnesota Wild, and the Nashville Predators. He would be looking for his first career win, too.

Okay, so which Aleksander Barkov will show up for this game? He has been quite the enigma since the Panthers took him with the second-overall pick in the 2013 entry draft. He doubled his goal total from his rookie to second season (from eight to 16), then added another dozen to his third-year total (28). Then, he dropped to 21 goals last season in 61 games. This season has been something of a roller-coaster… no goals in five games to open the season, then four in six games, then two in 11 contests, followed by four in five games, one in 11 games, and four in seven games coming into this contest. But he has none in his last two, so that might be a harbinger of a dry spell. Not that it seems to matter all that much, the Panthers being just 8-4-3 in the 15 games in which he has a goal this season, but he does lead the team in goals (four) in the eight games of the 2018 portion of the season so far. In ten career games against the Caps, Barkov is 3-4-7, minus-5.

That Keith Yandle leads the Panther defensemen in points this season (25), not to mention he is tied with Aaron Ekblad for the team points lead in the new year (four) will surprise almost no one. He is eighth among all defensemen in points over the years since he came into the league in 2006-2007 (435).  But Yandle has one strange number, or “factoid” if you will, attached to him. In each of the last six seasons he has recorded one, and only one fight. This year’s took place in the free-for-all that was the Panthers’ 6-1 loss to the Dallas Stars on Tuesday. And he did not pick on a stiff. He took on Antoine Roussel (his fourth fight this season), less than four minutes into the contest after Roussel tangled up with goalie James Reimer (who would have to leave the contest with an injury). But Yandle’s best use of his hands are in scoring or setting up teammates to score. He has been remarkably consistent in this role. Yandle and Shea Weber are the only NHL defensemen to average at least a half-point per game in each of the last nine seasons. He is 1-11-12, plus-1, in 20 career games against the Caps. 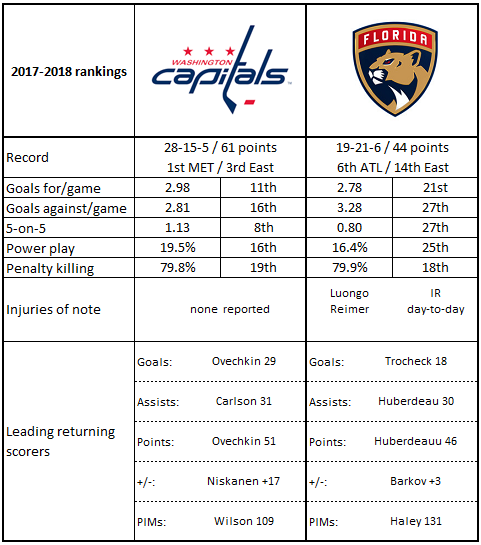 1.  Since January 1st, Florida has fewer standings points than any team in the league (five) except Los Angeles (four). No team has fewer wins (two, tied with New Jersey and Los Angeles).

2.  Florida does like to shoot the puck, though. Their 34.5 shots per game is second-highest in the league this season (Chicago: 34.6). Fat lot of good it’s done either team. Perhaps because in the Panthers’ case, they have allowed the most shots on goal per game (35.1).

3.  Home ice advantage has not turned into power play advantage for the Panthers. They have the second lowest number of power plays on home ice this season (69; Buffalo has 64).

4.  Florida would almost be better to take the penalty rather than draw one. Their nine shorthanded goals leads the league. And, they’ve only allowed one such goal this season, tied for fewest in the league (San Jose). And taking penalties is something the Panthers do, perhaps too often. Their 11:36 in penalty minutes is second-most in the league (Nashville: 12:33). No team has more major penalties than the Panthers (26), and it’s not close (Dallas: 21).

1.  This will be the ninth game for the Caps this month. At the moment, their eight games is tied with five other teams for fewest played so far in 2018. But would you have thought that one of those teams with which the Caps are tied – Arizona – is also tied with the Caps in standings points this month (10)?

3.  Only the Ottawa Senators have more bench minor penalties (12) than the Caps have this season (9).

5.  Overtime has been kind to the Caps. With six goals scored in the five-minute frame, they are second only to Pittsburgh (seven).

Until Tuesday night, Luke Witkowski of the Detroit Red Wings and Kevan Miller of the Boston Bruins shared the honor of having the most penalty minutes charged to one player in a game this season with 27 penalty minutes apiece. When play ended on Tuesday, the top spot was grasped firmly by Florida’s Micheal Haley. He skated five shifts and 2:29 of on-ice time, but three of those shifts ended in penalties, he being charged with six infractions in all totaling 39 minutes, ending with his being excused from further participation 13:50 into the second period of the Panthers’ 6-1 loss to the Dallas Stars. He was the highlight, in a manner of speaking, in an evening in which the Panthers were docked 84 minutes in penalties, and the Stars logged 54 penalty minutes. The first period alone featured four fights. With his 39 minutes in PIMs, Haley jumped over Washington’s Tom Wilson into the top spot in the league in penalty minutes, 131 to 109.

It is not as if Haley is a heavyweight; more of a cruiserweight at 5’11”/205 pounds. But shy he is not. He played sparingly over his first six seasons in the league, amassing 222 penalty minutes in 72 games with three teams (the New York Islanders, New York Rangers, and San Jose Sharks). He broke out in a big way in his second season with San Jose, recording 128 minutes in just 58 games. And now, he has those 131 minutes in just 46 games with Florida. Such is his role. In eight NHL seasons he has never averaged as much as ten minutes of ice time per game (career average just over eight minutes per game), and he has just seven goals and 23 points in 176 NHL games. In five career games against the Caps, Haley has yet to record a point and is minus-1 (he has yet to record a shot on goal against the Capitals). Strangely enough, he does not have a penalty minute in any of those five games against Washington.

There are 340 forwards who have skated at least 400 minutes this season.  Chandler Stephenson is last among them in shots on goal per game (0.42).  He has not recorded more than two shots on goal in any of his 35 games so far, and he has hit that total four times.  He did not record any shots on goal in 24 games.  The Caps have enough skilled offensive forwards, but then again, this is a player who recorded 66 goals in 170 games over his last three years of Canadian junior hockey.  It just has not yet been a part of his game to be expressed as a pro (he had 25 goals in 174 games over four years with the Hershey Bears).

Stephenson’s role going forward might be as a defensive/bottom-six specialist in the mold of Jay Beagle, who was himself a modest scorer over his first six seasons (13 goals in 182 games).  Over his last four seasons, though, Beagle has 36 goals in 248 games, roughly 12 per 82 games.  It argues for a certain level of patience with Stephenson, who is just five years removed from his draft year (3rd round/77th overall in 2012).  But for the moment, his being quiet in the offensive end (no points, one shot on goal over his last six games) can be tolerated if he can contribute in other ways, such as providing solid defense to allow others to bear the scoring load.  Stephenson does not have a point in either of his two career appearances against Florida and is “even.”

If not now, when? As in, when will the Caps end their losing streak?  Sure, Florida is a good team at home, 5-1-0 in their last six contests. But that run goes back to when Roberto Luongo was healthy, and at the moment, he isn’t. Not that James Reimer is a bad goalie, but will he even be ready to go after leaving Tuesday’s game against Dallas less than four minutes into the contest? And if you want to see how that played out in terms of an odd NHL rule, read this…

But back to the point at hand. Florida is in a bit of a mess in goal at the moment, and there might not be a better opportunity for the Caps to find their offense than in this game. Their backup-backup – Harri Seteri – has only three NHL games on his resume, and Samuel Montembeault, playing at their AHL affiliate in Springfield, has never dressed for an NHL game and is in his own rookie season in the AHL (12-15-2, 3.00, .904, one shutout), although he is viewed as the successor to Luongo at some point.

Washington has alternated wins and losses in their last seven trips to Florida (4-1-2), and if the pattern holds, this would be a loss. It won’t be.

Posted by The Peerless at 6:17 PM No comments: