The Peerless' First Half Awards

Calder Trophy: given to the player selected as the most proficient in his first year of competition in the National Hockey League.

Patrick Kane, Blackhawks. Kane leads all rookies in assists and total scoring. Since weathering a four-game scoreless streak in November, he has been held off the scoresheet only five times in 17 games. He is currently on a six-game points streak (1-6-7, even).

The Ray Babbitt Award: given to the rookie selected as the most proficient in one game-deciding skill that has nothing to do with the competition of a hockey game in the National Hockey League.

Sam Gagner, Oilers. Gagner is tied for the league lead in shootout goals and leads the league in those of the game-deciding variety (5). has won 18 games this year, 11 of them via the shootout.

Selke Trophy: given to the forward who best excels in the defensive aspects of the game.

Sulky Trophy: given to the player who best excels at causing fans to sulk day after day over his defensive performance.

Trophy: presented by the National Hockey League Broadcasters' Association to the NHL coach adjudged to have contributed the most to his team's success.

Andy Murray, Blues. The Blues have realized a 14-point improvement over this time last year with a team that does not have a lot of high-end talent.

Addams Trophy: presented to the NHL coach adjudged to be so frightening behind the bench as to scare small children and Darren Pang.

John Tortorella, Lightning. OK…go look up “gruff” in the dictionary. We’ll wait a moment…you saw Tortorella’s picture there, right? There isn’t a player he won’t throw under the bus. We’re thinking that Lightning bus has spent more time on the rack at Meineke getting the undercarriage checked than it has in service, given the performance of the Lightning this year and the number of bodies that might have found their way to the pavement.

Norris Trophy: given to the defense player who demonstrates throughout the season the greatest all-round ability in the position.

Nicklas Lidstrom, Red Wings. Yeah, it’s easy to pick Slick Nick, but he leads all defensemen in scoring; he leads in plus-minus, he’s second in ice time. What more does one want?

Chuck Norris Trophy: given to the player who demonstrates an orneriness and propensity for pugilism as to make men cringe and women (or Don Cherry) swoon, despite starring in a bad production.

Daniel Carcillo, Coyotes. “Does not work or play well with others”…that had to be in bold on his report card as a child. 444 total playing minutes, 172 penalty minutes, 10 fighting majors, four misconducts, two game misconducts, and he maimed the partridge in the pear tree.

Vezina Trophy: given to the goalkeeper adjudged to be the best at this position.

Roberto Luongo, Canucks. If there is any lingering doubt over who is the best goalie in the NHL, it should have evaporated in the wake of Luongo’s first half. Second in goals-against average, third in save percentage, and doing it for a team that does not generate a lot of offense (20th in goals/game). He is not the head-and-shoulders winner, but he is the clear winner of the first half.

Ve-sieve-ina Trophy: given to the goalkeeper most likely to inspire creative use of profanity by fans and coaches alike.

Andrew Raycroft, Maple Leafs. 2-6-5, 3.79, .878. Given how grouchy Leafs fans can be, he might be the only goalie in the league who wears his pads home from the rink out of self-defense.

Pearson Trophy: presented annually to the "most outstanding player" in the NHL.

Vincent Lecavalier, Lightning. In the midst of what is becoming a Titanic season for the Lightning (like the ship…not the adjective), Lecavalier has continued and built upon his outstanding performance of the past few years. He is on a pace to set career marks in goals (55), assists (66), points (121), and power play goals (14).

Pavel Bure Trophy: presented annually to the player “mostly out standing at the far blue line” in the NHL.

Ilya Kovalchuk, Thrashers. OK, so he’s not as bad as he used to be, but it is a head-scratcher how a guy with 33 goals and 57 points in the first half could be a -7 (hint…10 of those goals and 21 of those points are on the power play).

Hart Trophy: given to the player judged to be the most valuable to his team.

Jarome Iginla, Flames. There are two elements we think important to this award. First, the award is for the most valuable player…not necessarily the best. Second, the player is judged in the context of value to his team. Iginla is the man in Calgary…28 percent more points (60) than the next player on the roster (Kristian Huselius, 47), more than twice as good a plus-minus (19) as the next best player (four players are at +9), 50 percent more power play goals (12, compared to eight for Daymond Langkow), twice as many game-winners (six; two other players each have three), almost three more minutes per game than the next highest forward. Absent Iginla, it isn’t likely that this is a top-eight team, whereas they currently lead the Northwest Division and occupy the three-seed in the Western Conference. In terms of value to his team, Iginla stands at the top of the heap.

Heartless Trophy: given to the player judged to be least likely to have shown up in the first half.

Rangers. Caps fans know the story…spend a mint for a guy, then spend more to find players to play with him…watch how things don’t so much unfold as unravel. The Rangers – well, the Rangers and Caps – are paying $8.36 million for Jagr this year, and they added Chris Drury and Scott Gomez (to the tune of another $14.4 million) to help elevate Jagr’s game. And for that…he’s got roughly the same production as Tomas Plekanec…and that’s after going 4-11-15 in his last ten games. Not a small consideration in the Rangers’ dead last ranking in Eastern Conference scoring. He’ll be spending – so to speak – his second half struggling to qualify for his option for next year.

We kid, because we love. For all of these guys, we’re talking about members of a community of a few hundred that represent the very best in the world at what they do. And we respect their effort…well, except maybe for Jagr.

This was posted on ESPN a couple of days ago, but Melrose's mid-year trophy picks include a couple of Caps among the finalists and one "winner."

The Star Quarterback and the Girl Next Door

The star quarterback is going steady with the girl next door, and the prom queen seems beside herself with jealousy.

Such is where we seem to find ourselves with respect to Alex Ovechkin, Washington, and .

Once more, we are treated to a column in the Montreal Gazette that expresses longing at the possibility – remote though it is – that the “star quarterback” will forgo the plain girl next door for the prom queen, that Alex Ovechkin will forsake Washington and succumb to temptation to play for the Montreal Canadiens come October.

The “prom queen” in this case has everything going for it…24 Stanley Cups, a history that defines the term “legendary” for the sport of hockey – both with respect to the club and its long list of hall of fame players – and a fine arena filled every night with some of the most ardent and knowledgeable fans on the planet. And, in a new twist, the prom queen is apparently Russian.

Jack Todd goes over ground he’s plowed before, adding this time that Ovechkin did not dismiss a desire to play in Montreal out of hand in the post game interviews, and that after all, not only would the Canadiens offer all that history and adulation from a rabid fan base, but the Canadien locker room would be scarcely different than that he might find playing for Moscow Dynamo – Andrei and Sergei Kostitsyn, Ovechkin’s “great and good friend” Andrei Markov, Alexei Kovalev, Mikhail Grabovski. And if that isn’t enough, Ovechkin just might leave for the real thing – an $8 million tax-free pay day in . But he might, “for the right inducement - say 15 years at $10 million per year… elect to play in a place where his talents will be appreciated, which will never be the case in the U.S. capital.” That place is, of course, Montreal.

What we suspect Todd knows, but in the blindness of desire has set aside, is that the matter is not Ovechkin’s to “elect.” He can influence the process, make his desires known, even forgo the NHL to return to . But as a matter concerning from which city he draws an NHL paycheck, the decision rests with . And not matching terms of an offer sheet tendered to Ovechkin, should it come to that, just isn’t an option for this franchise. As for a trade?...there is no conceivable trade that would bring back anything approaching equivalent value. With there being the right of first refusal held by the Capitals, there is no undue pressure to take a “less than market value” trade, as might exist if the player could walk free and clear at season’s end.

But there is a much more basic problem with the whole argument. …Ovechkin hasn’t given any indication he is unhappy with the girl next door.

True, Ovechkin responded to a reporter’s question yesterday on the matter of how he likes playing in that, “"This is my favourite city. The crowds, the noise, the music. It's a great place to play. I love to be here." But that is not the same as saying “I want to play for the Canadiens.” And while it is also true that Ovechkin can’t, as a practical matter, go around making that sort of statement, it is quite a leap of logic to conclude that he does not like playing in Washington. The personality he shows to the public in D.C. is hardly that of a player checking airline schedules for the first flight out of DC at season’s end (unless it is to head back home to Russia for home and vacation).

The unspoken theme here – and it is always the theme – is that doesn’t deserve Ovechkin, and [fill in the name of your favorite hockey team] does. One can almost hear the prom queen spitting out the words under her breath, “she doesn’t deserve him, he should be with me.”

Well, sometimes, the star quarterback finds happiness with the girl next door. 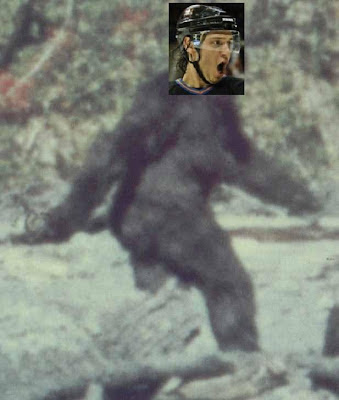 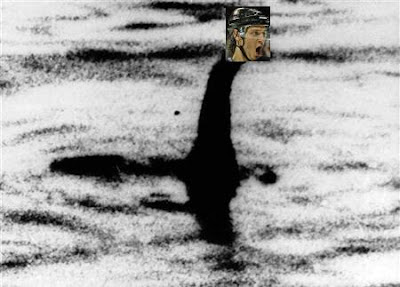 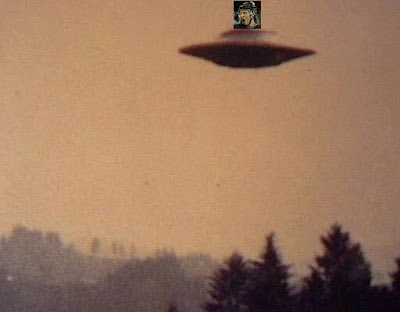 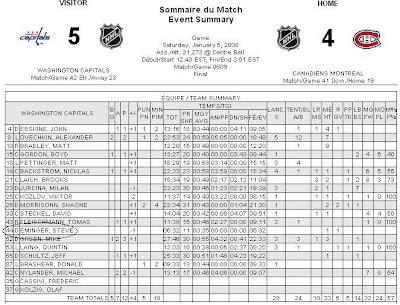 We will leave it to you, dear reader, to believe this to be true...or merely a hoax.
Posted by The Peerless at 12:01 AM 5 comments: