And now, the last game that mattered. And oh, we were tempted. Games 7 matter. Win or lose, they matter. But it’s hard to make a case that Game 7 of the Eastern Conference semi-final matters more to the Capitals than does another game in that series against the Penguins. Let’s look at that Game 7, first…

Game 7 – a 6-2 win by Pittsburgh – was not so much disappointing as it was inevitable in a couple of ways. First, there was the matter of goaltending. As we noted in an earlier edition of this short series, the playoffs are often a goaltender’s time. And for 24 days – from April 18th through May 11th – it was Semyon Varlamov’s time. He was 7-5, 2.28, .925, with two shutouts. But the relentless pressure of the Penguins was taking a toll, too. In six games leading up to Game 7, Pittsburgh recorded no fewer than 28 shots on goal in any game and had at least 36 in each of the other five (averaging 37.7 shots-per-game in the process). Whereas only once in six games in the opening round against the Rangers did he allow more than two goals, only once in the first six games of the second round did he allow fewer than three. The wheels had been coming off for a little while for the youngster.

And that was perhaps a function of depth, at least in performance. The difference was not a lot, mind you, but enough. 18 skaters had points for the Penguins through six games, the Caps 17. The Penguins had ten players with at least one goal, the Caps eight. The Penguins had seven players with at least four points through six games, the Caps six. All of the big four for the Penguins – Sidney Crosby, Evgeni Malkin,and Bill Guerin from the top two lines, and defenseman Sergei Gonchar – had at least one goal. Only three of the big four for the Caps – Alex Ovechkin, Alexander Semin, and Nicklas Backstrom from the top two lines, and defenseman Mike Green – had goals for the Caps (Green being the absentee).

Game 7 happened the way it did because of the first six games.

But there was a game in that series that captured the rest of the season to date in microcosm, with both the warts and the wonderful, an example of what sort of team the Caps could be with time and patience. And that is why Game 6 mattered…

The background: After winning the first two games of the series at home, the Caps lost Games 3 and 4 in Pittsburgh, then lost in equal parts fluky and heartbreaking fashion in Game 5 at Verizon Center, giving up the first goal, taking a lead, surrendering the lead, then tying the game when all-everything Alex Ovechkin scored with less than five minutes remaining in regulation. But in the fourth minute of overtime, Evgeni Malkin carried the puck down the right side with Sidney Crosby heading for the net on his left, and Tom Poti back for the Caps. Using his big frame as a shield, Malkin tried to sweep the puck across to Crosby, but the pass his the shaft of Poti’s stick and ricocheted under goalie Semyon Varlamov for the winner. Given the history of these teams, only the most deluded Caps fan would have held out hope that there was a win in store at Mellon Arena in Game 6. In six series-clinching opportunities against the Caps in the playoff history of this rivalry, the Penguins were 5-1.

Why it mattered: Survival. In more than 30 years of hockey, it hasn’t been a hallmark of Capitals teams in the playoffs, but the Caps have shown a certain resilience under Bruce Boudreau in dire situations. In two previous playoff series under Boudreau – in the opening round in 2007-2008 and the opening round this past season, the Caps fell behind three games to one, only to force a Game 7 in each. The comeback was not so long a march this time around, but it was the third time in three series under Boudreau that the Caps had to win a Game 6 to force a deciding game. And it was the third time they would have to do it on the road. Overall, the Caps were 5-1 in elimination games under Boudreau coming into this one.

This one didn’t take long to take on a certain “Rocky” feel. The Penguins drew first blood – a goal by Bill Guerin in the sixth minute of the first period. From there the clubs traded the lead. Washington took it on goals by Viktor Kozlov and Tomas Fleischmann. The Penguins regained it on goals by Mark Eaton and Kris Letang. The Capitals grabbed it once more on goals by Brooks Laich and Kozlov early in the third period. It was a game of “body shots” from the players on the undercard. The stars who would be thought to throw the haymakers – Sidney Crosby, Evgeni Malkin, and Alex Ovechkin – failed to register a goal. That changed late, when Sidney Crosby, for what seemed to be the latest in a dozen such instances, scored on a backhand from the doorstep with less than five minutes in regulation to tie the game.

But for all the scoring – 19 players had a hand in the eight goals scored in regulation – there was another statistic that would loom large in the overtime. David Steckel won nine of 13 draws in regulation. None of those draws, however, were taken against Maxime Talbot. Steckel and Talbot took a faceoff at 6:15 of the overtime, and while Talbot broke his stick on the draw, Steckel pulled the puck back to Brooks Laich at the right point. As Laich was collecting the puck, Steckel headed for the net where he was met by Philippe Boucher. Laich tossed a floater at the net, and Steckel squirmed free of Boucher just enough to allow him to deflect the puck past goalie Marc-Andre Fleury’s elbow and in for the winner.

The Takeaway: Let’s face it. In years past, the drive by Rob Scuderi at 3:53 of the overtime that was deflected in front of Semyon Varlamov and hit the crossbar would have found its way to the back of the net in previous years, especially against this team. The drive by Alex Ovechkin that Fleury snared with his glove at 4:12 of the overtime would have been answered on the ensuing faceoff with a Penguin rush that would have ended in a goal… in previous years. But the Caps, facing elimination, starting a goaltender having played too few games to be yet considered a rookie (and who made a big save on Tyler Kennedy as Chris Kunitz was flying over his shoulder just before the Scuderi shot/deflection in overtime), playing in a rink that held a lot of bad memories, stood toe to toe with the Penguins and fought off elimination on the road once more. The Steckel goal in overtime was probably the high water mark of the year for Caps fans. In that moment, anything seemed possible.

Reality paid a visit to the Capitals a couple of days later in the form of a Penguins team that displayed its own brand of resiliency. And the best that can be said of that is that it was another lesson in playoff hockey to be learned by a club that didn’t have a lot of playoff experience. But one lesson that the Caps did learn, last year and this, is “don’t quit.” It was that – a 6-1 record in elimination games over two years heading into that Game 7 – for which fans expressed their appreciation in their extended ovation for the boys in the dying moments of that Game 7. It was the second year in a row the Caps had to endure a bitter sweet ovation on their own ice.

Next year, that ovation could very well be for something else for having played games this past season that mattered.
Posted by The Peerless at 11:36 PM No comments:

Bruce Boudreau moves up from Hershey to Washington in 2007...

Bob Woods wins the 2009 Calder Cup with Hershey, gets promoted to assistant coach for the Caps...

Mark French is an assistant on the 2009 Calder Cup winners, gets promoted to head coach for the Bears...

Troy Mann, who has connections to both Boudreau (played for him when Boudreau was at Mississippi) and Woods (was a teammate of his with Mississippi), is named the Bears' new assistant coach under French.

John Walton has the details on the new Hershey bench boss and his assistant.
Posted by The Peerless at 1:54 PM No comments:

It’s Day 1 at Capitals Development Camp. Players, bloggers, twitterers, uh…coacherers. It’s nice to have hockey in July. If you’re looking for deep insights or comprehensive breakdowns of the performances of the young charges, well… we ain’t got ‘em. Not today. We have pics and a few comments…

One of the interesting subplots in the morning session was the frequency with which Joe Finley (6’7”, 229) was matched against Mathieu Perreault (5’9”, 165) in one on one situations. One might have thought that Perreault would skitter and dart and turn Finley inside out. Such was not the case… at least not too often. We’d rate the morning a draw between these two.

Speaking of Perreault, he was the special object of Coach Bruce Boudreau’s affection on one occasion when Perreault spent a little too much time hanging onto the puck trying to do everything himself. Perreault ended up shooting the puck into goalie Braden Holtby’s pads. Boudreau took him aside and explained how he’d never beat him that way (with a good-natured expletive tossed in for appropriate adjectival emphasis).

For Day 1, at least, it seems a bit like a stripped down affair in one respect. The Caps brain trust now seems to know what they want and how they want it, and there was a lot of situational action with teaching moments from Coach Boudreau interspersed. For the moment, there seems to be a bit of hesitancy – of not wanting to stand out by making a mistake – among the boys, but Boudreau and newly minted assistant Bob Woods were giving encouragement to guys in groups and individually.

But Boudreau did appear to offer a warning of sorts (at least, if our hearing wasn’t too poor) with respect to being in shape and what awaits in September when the stakes get higher. Knowing what took place at last year’s rookie camp before the vets arrived, this was no idle warning. As if to give the guys a taste, he conjured up an oldie, but a goodie, to close the morning session – what players refer to as a “bag skate,” in this case, from the near boards to the far boards and back, far faceoff dot and back, hash marks and back, etc., with one cycle added to each shortened distance, until the guys did six repetitions of near hash marks and back.

We won’t be at the afternoon session, but we’ll try to pick up things tomorrow. For the time being, some snaps of the morning action (click for larger images)… 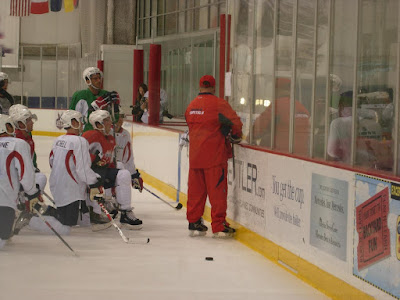 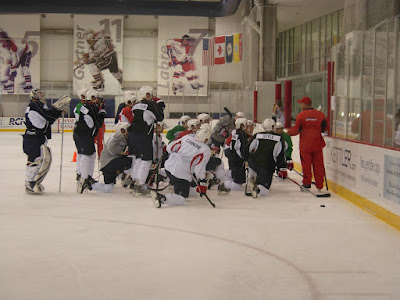 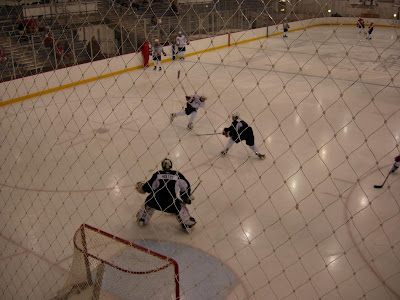 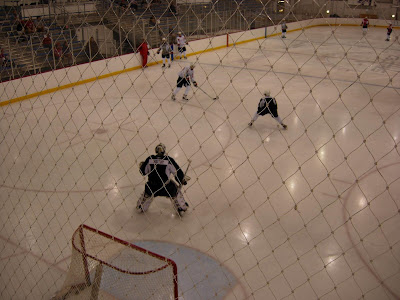 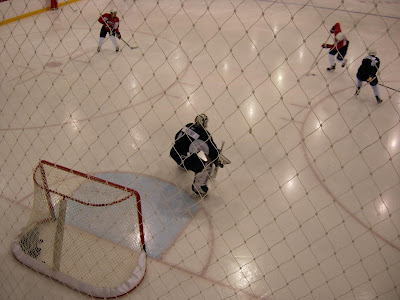 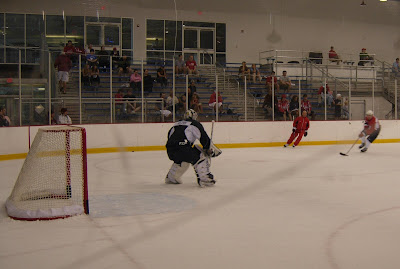 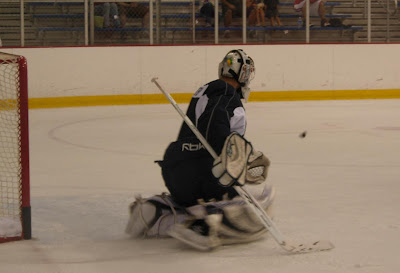 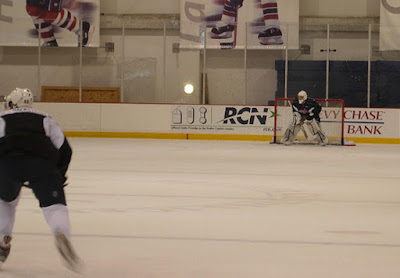 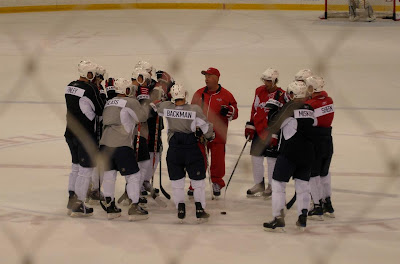