Washington Capitals: That Was The Week That Was - Week 20

The Washington Capitals have 20 weeks in the books.  Week 20 was their 13th winning week this season and an odd one of sorts that had an “all or nothing” quality to it.  It that regard, the week was every bit in line with their performance over the last few weeks. 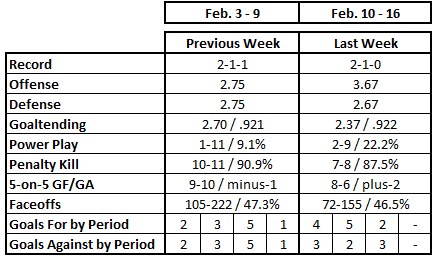 The Capitals, for a change, did not have a one-goal decision in Week 20.  When they beat the Los Angeles Kings, 6-4, to open the week, it broke a string of five straight one-goal decisions (3-1-1), two of which were settled in overtime.  That win over the Kings wrapped up a successful home stand for the Caps, who finished their longest home stand of the season with a 4-1-1 record.  That start to the home schedule in February was a far cry from the struggles on home ice in January, in which the Caps were just 1-2-2 at Capital One Arena.

Following the win over the Kings, the Caps took to the road for their longest stretch away from Capital One Arena for the season – six games.  The first two games of that trip wrapped up Week 20, and two more different games in succession would be hard to find this season.  A listless 3-0 loss to the Columbus Blue Jackets might not have been surprising, the team’s third game in four nights, but it was disappointing.  The Caps rebounded with arguably their best game of the season, considering the opponent, the venue, and the circumstances.  They defeated a San Jose Sharks team that has given the Caps fits over the years, especially in San Jose, and was on a six-game winning streak, to boot.  The 5-1 win left the Sharks with only their second instance of scoring one goal on home ice this season and left the Caps with a 15-10-2 road record, fifth-best among Metropolitan Division teams.  This is of particular importance to the Caps, who will play 14 of their remaining 24 games on the road to close the regular season. 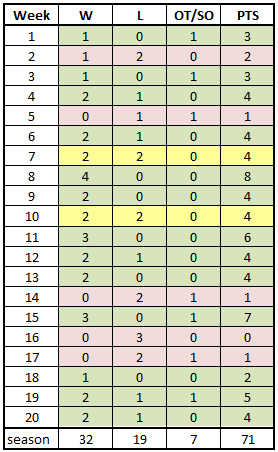 It was a productive week in the offensive end for the Capitals, where the team expressed most that recent “all or nothing” quality.  The Caps scored four or more goals in each of the week’s three games, and that brought to 11 the number of consecutive games in which the Caps scored three or more (eight), or one or fewer goals (three, including being shut out twice).

When the Caps recorded 31 shots on goal against Los Angeles to open the week, it was the fourth straight game in which they posted 30 or more shots on goal, tying their season high set on two other occasions, and the ninth time in ten games that they did so.  That streak came to an abrupt end when Columbus shut out the Caps on 20 shots in taking a 3-0 decision in the middle game of the week.  That the Caps fell one shot short of 30 against San Jose to close the week was perhaps more a function of taking a three-goal lead into the third period of what would end as a 5-1 decision.  The Caps had only five third period shots in that game, the last a goal into an empty net.

The Caps spread their goal scoring around, four players finishing the three-game week with two goals apiece (Jakub Vrana, Evgeny Kuznetsov, T.J. Oshie, and Alex Ovechkin).  Vrana had both game-winners in Week 20, tying Oshie and Nicklas Backstrom for the team lead this season (four).  Kuznetsov, Oshie, and Ovechkin led the team in points for the week, each of them going 2-3-5.  Kuznetsov, who had a four-point tame against Los Angeles to open the week, has been on a tear of late, going 7-9-16, plus-6, over his last ten games.

What the Caps did not get was scoring out of the fourth line.  Nic Dowd, Devante Smith-Pelly, Chandler Stephenson, and Dmitrij Jaskin went the week without recording a point.

The best that might be said of the Caps on the defensive side of the puck is that they improved over the course of the week.  In the first game of the week against the Kings, one might have expected little spark from Los Angeles, a team that went into the contest with the league’s 30th ranked scoring offense.  However, the Kings were finding the net with some more consistency in road games leading up to their contest in Washington.  They went into that game having scored three of more goals in four straight games on the road and extended that streak to five games when they scored four against the Caps.  What was worse for the Caps, though, was going minus-17 in shot attempts-for at 5-on-5 (39 for, 56 against), their fourth-worst performance on home ice this season and worst since late November.

The Caps were better against Columbus, which is not to say “good.”  Washington was still in minus double-digits in 5-on-5 shot attempts, going minus-11 against the Blue Jackets (28 for, 39 against).  On a percentage basis, they were barely better against Columbus (41.79) than they were against Los Angeles (41.05).  Even against San Jose to close the week the Caps were under water (minus-8/45.74 percent), but this is an area where the Caps have struggled on the road.  They are over 50 percent in shot attempts-for at 5-on-5 only once in their last six road games and only 11 times in 27 road contests this season.

The good overall numbers for the week mask something of an emerging concern in goal.  Pheonix Copley opened the week in goal for the Caps and allowed four goals on 33 shots in earning a win.  It was the sixth-straight start in which he allowed three of more goals, and in his last five starts he has a save percentage of .863.  Since January 14th, when that five-game slump started, his save percentage is second worst among the 41 goalies logging at least 250 minutes. 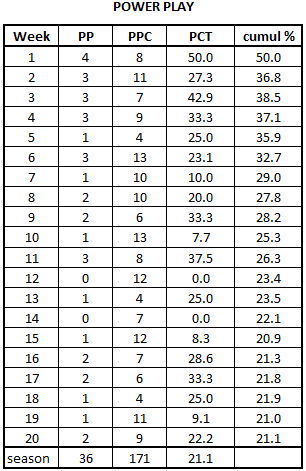 The Caps were good on the other side of special teams, both in limiting chances and in penalty killing efficiency.  The eight shorthanded situations faced is the lowest number faced by the Caps in a week of three or more games this season.  It is also the third straight week in which the Caps did not allow more than one power play goal for the week, going 19-for-21 in that span (90.5 percent).

In its particulars, the week on the penalty kill resembled the week on the power play, only in negative, in that a low volume of power play shots on goal faced to begin and end the week sandwiched around a game in which the Caps found themselves facing a higher shot volume.  Washington faced three shorthanded situations against Los Angeles, killing off two, and faced only one against San Jose, skating that off with no harm done.  Washington faced only two shots on goal in those two games (both by Los Angeles) in 6:24 of penalty killing ice time.  In the middle game, though, the Caps fended off six Columbus power play shots on goal (no goal scored) in 7:28 of penalty killing ice time in skating off four Blue Jacket power plays.  Overall, it was a good week in limiting the three opponents to 0.58 shots on goal per power play minute. It was a typical week in the circle for the Caps, which is to say, “poor.”  That might be a bit harsh, but only a bit.  The Caps won the faceoff battle in all three zones in their win over the Kings to start the week but did not win a zone in either end the rest of the week.  The Caps were particularly unsuccessful against Columbus in the middle game of the week, losing all three zones handily on their way to an 18-for-51 performance (35.3 percent).  They did win nine of 16 draws in the neutral zone against San Jose in the final game of the week to salvage something.

Individually, the Caps were all over the place.  Nic Dowd was the only Capital taking at least ten draws to top 50 percent for the week, but barely (7-for-13).  Nicklas Backstrom might have joined him, but he was frustrated into a 7-for-18 performance against San Jose.  Lars Eller managed only 40 percent for the week, largely on the basis of a dreadful 3-for-18 performance against Columbus.

That the Caps finished at 46 percent for the week is a bit misleading.  They were under that number in the ends and were especially unsuccessful in the offensive end, where they finished at 43 percent.  The odd part of that was that the oft-struggling Evgeny Kuznetsov won half of his 14 offensive draws for the week. 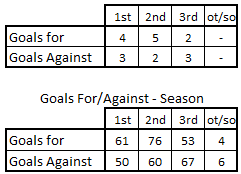 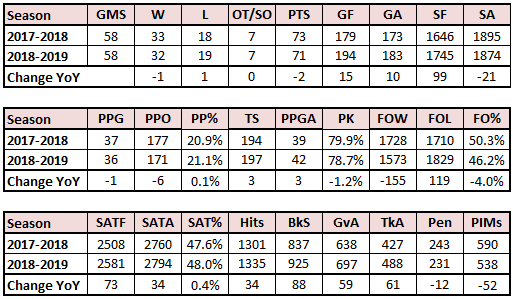 As the Caps approach the 60-game mark of the regular season, this season still looks a lot like last year in a lot of ways.  Through 58 games, the difference in their record is one fewer win and one more regulation loss.  Their goal differential of plus-11 is up over last year (plus-6), but so are the total goals scored (377 between the Caps and opponents this season and 352 last season).  Special teams are barely distinguishable from year to year, be it goals scored or allowed, chances, and efficiency.  At a more granular level, 5-on-5 shot attempts this season are almost where they were last year.

It is in the “grittership” numbers where most of the differences reside, and the results there are mixed.  Blocked shots and takeaways are up, a good thing.  But giveaways are up, too, and faceoffs are down, both being negatives.  That the Caps have 52 fewer penalty minutes this season over last is almost entirely a product of Tom Wilson’s suspension to start this season.  He has 77 minutes through 58 games this season (having played in 39 games), while he had 145 minutes through 58 games last season, 68 more than he has at the same point this season.

Week 20 was a good week on balance.  It was disappointing to come short in the manner the Caps did against Columbus, a game in which they never seemed to have much energy.  But taking care of business against a struggling opponent in the Kings and coming up big in a tough setting against the Sharks have to be viewed as positives.  It was the kind of week that the Caps could use as a momentum-builder.  They will need it.  The Caps play 11 of their next 15 games on the road, and that will provide quite a challenge for a team trying to overtake the New York Islanders for the top spot in the Metropolitan Division.