The Peerless Prognosticator is ON THE AIR!!! -- Caps vs. Panthers, December 3rd

The Caps are back home, if only briefly, to host the Florida Panthers in a Southeast Division Marquee Matchup (as they say). It is the Caps’ only taste of home cooking over a span of six games dating from November 28th (a win in Montreal) through December 9th (at Buffalo). The Panthers, meanwhile, are jetting to Washington for their only road game in four from last night through next Monday. The Panthers and the Caps are two teams…

“Hey, a goalie and a defenseman walk into a bar…” 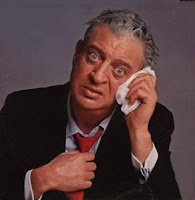 Great, Rodney. And what brings you back from the great beyond for a hockey game?

“What can I tell ya… a guy whacks his goalie after the other team scores a goal. And I thought I got no respect.” 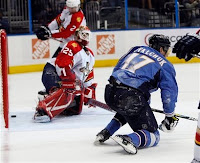 “Hey, I played in some tough rooms, but you give up a goal, then you get whacked by your own guy… now that’s a tough room!”

And I’ll bet you’ve heard some jokes about it, too.

“What can I tell ya… a goalie and a defenseman walk into a bar. The bartender says to the defenseman, 'what’ll ya have?' And he says, ‘a goalie maskbanger.’”

Guess you had to be there…

“Yeah, the Marlins have already offered that Ballard guy a contract… He was just frustrated ‘cuz he never played tee-ball as a kid… huh, and I thought they only did ‘the chop’ in Atlanta…”

Tomas Vokoun really took one on the melon.

“Yeah, but he shoulda seen my doctor, Dr. Vinnie Boombatz…"

“He’s got a great save percentage.”

Well, maybe Vinnie should play for the Panthers, because if there are two teams going in opposite directions, they are Washington and Florida. The overall numbers for these teams tell a tale of two very different hockey teams (all numbers before last night’s action)… Those defensive statistics are rather grim – bottom five in goals against, 5-on-5, and penalty killing. And now, they face the prospect of Scott Clemmensen having to start on consecutive nights (he was expected to get the nod last night against Colorado). If not him, the task of taking on the Caps could fall to Alexander Salak. Neither choice is going to give comfort to Panther fans. Clemmensen has one start against the Caps this year for Florida, and he allowed seven goals on 32 shots – five on 16 shots in the third period -- in a 7-4 loss on November 7th. Meanwhile, Salak has appeared in one game for the Panthers this year – way back on October 9th – allowing two goals on seven shots in mop-up duty in a 7-2 loss to Carolina. That was Carolina’s last win in regulation until November 21st. Add to that the fact that Florida is on a five game losing streak (0-3-2 going into last night’s game), and things look bleak.

And if that isn’t enough, the Panthers have forwards David Booth, Cory Stillman, and Kenndal McArdle on the shelf. Stillman appears closest to returning, but it won’t be tonight. Another scoop on this sundae is that no Panther is on a pace to score as many as 70 points this year. Nathan Horton leads the club with 22 points (7-15-22), which puts him on a pace for 69 by year’s end. He has, however, picked his pace of late. He has points in nine of his last ten games (3-8-11).

At the other end is Steve Reinprecht, who has cooled off some from the good start he had. In his first 13 games this year, Reinprecht was 9-4-13, plus-6. In his last 13 games, he is 1-6-7, minus-1. Part of his problem might be that he has only 12 shots on goal in his last nine games. He’s been something less than a good-luck charm against the Caps this year. In two games he is minus-4; he’s plus-9 against the rest of the league.

Michael Frolik has been on something of an odd pattern of scoring of late. Starting on November 7th in the 7-4 loss to Washington, he’s almost perfect in alternating games with and without points (he had points in consecutive games on November 18th and 20th). Over those 12 games, he is 5-4-9, minus-2. Given that the Panthers were playing Colorado last night, Frolik is someone who bears watching in this contest.

On the back line, Florida has seven defensemen who have recorded at least one goal and at least seven points. For a team that is ranked so low in the standings and in so many statistical categories, it is somewhat remarkable that of those seven defensemen, four of them are on the plus side of the ledger. The flip side of that is that Bryan Allen and Dmitry Kulikov are a combined minus-15. Kulikov is an interesting case of on-the-job training. Although he is a minus-9 for the year, he has only one minus game in his last 12 and is 3-1-4, plus-1 over that span. All in all, it’s not bad improvement for a kid drafted this past June.

Allen, on the other hand, has struggled of late. In his last five games he is without a point, minus-4 and took a fighting major in a 3-2 loss to Pittsburgh on November 23rd. He’s relied upon to police his own end, and that has been a bit of a problem.

For offense from the blue line, the Panthers have Bryan McCabe, who leads the defense in scoring (3-9-12). But he has only one point (an assist) in his last six games after getting points in seven of his previous nine.

Full and even strength. The Caps have a 0.60 goal advantage in 5-on-5 ratio over Florida. That is quite an advantage for the Caps, especially playing at home.

Shots, shots, shots. Florida has allowed the second most shots on goal per game in the league (35.1). The Caps as a team are shooting at 10.8 percent success clip. On the basis of those numbers, you’re starting by looking at a four-goal night for the home team if they can feed the Florida goalie his customary portion of shots.

“Brooks” no resistance. Brooks Laich is without a goal in his last six games and has only two points over that span. But he has a five game points streak against the Panthers (3-3-6) dating back to last season. There might not be any better tonic for Laich than the Panthers visiting town.

In the end, the Caps – even with a good portion of their lineup out due to or just coming back from injury – have too much firepower for the Cats. The Caps have been behind teams at the first intermission only twice this year, and Florida wasn’t one of them (the Islanders were, both times). This game should be over by then… right?