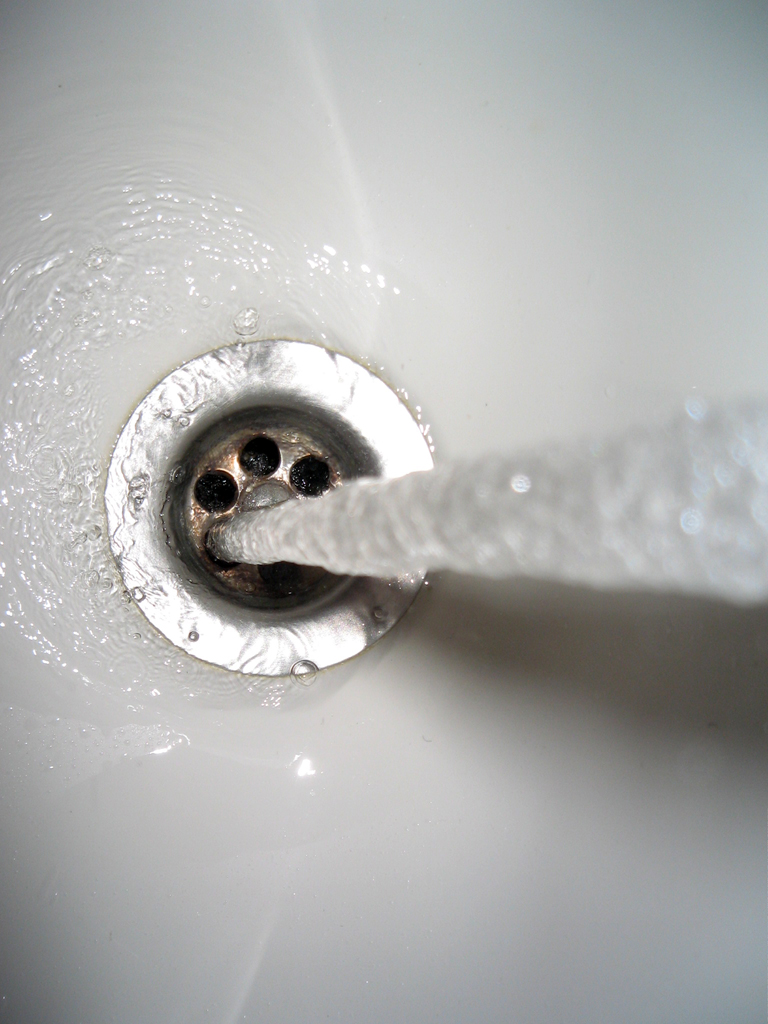 Remember that Ottawa Senators game when the Washington Capitals played well for 38 minutes, then gave up three straight goals to lose, 3-2?

Well, here we are again.  For 24 minutes the Caps played the Pittsburgh Penguins even, holding the Atlantic Division leaders to a 2-2 stalemate.  Yeah well, then the Penguins scored goals 37 seconds apart and never looked back in a 6-3 win this afternoon over the Caps.

And once more we have the Caps playing well in fits and starts, but not stringing nearly enough of those instances together for nearly enough time to win decisions against competent opponents.  How bad was it?..Let’s just go right to…

-- The Penguins got production out of the guys who have to produce.  Chris Kunitz got a hat trick, Sidney Crosby and Evgeni Malkin combined for five assists.  Meanwhile… Alex Ovechkin and Nicklas Backstrom combined for two assists.  One assist came on a fluke goal (Backstrom’s on the goal John Carlson scored off the stanchion along the side glass), the other came when the outcome was pretty much settled (Ovechkin on Mike Ribeiro’s goal to cut a three goal lead to two in the third period).

-- 14 skaters and goalie Braden Holtby were charged with giveaways.

-- Someone named Robert Bortuzzo had four blocked shots for the Penguins…the entire defense for the Caps had four.

-- The Caps were 1-for-3 on penalty kills.  That makes four times in nine games they have allowed at least two power play goals.

-- Braden Holtby has a save percentage of .854 in the first period of games this season.  That is not a lot worse than his .862 save percentage overall, but it is still awful.  Huie cannot keep starting behind the eight ball like this (he has allowed two goal in the first period in three of his four appearances), or he will not be starting much of anything going forward.

-- Mike Ribeiro continues to be the engine that drives what passes for the Caps offense at the moment.  He had a goal and an assist, but as much as that, four other Caps (Mike Green, Wojtek Wolski, Troy Brouwer, and Alex Ovechkin) shared points on scoring plays in which Ribeiro was involved.

-- Penalties, penalties.  We say that twice because the Caps now lead the league in 5-on-3 power play goals scored against (four).  Today, the Penguins got theirs when the Caps blew off frustration with two penalties late.  They were okay to that point, with only a tripping call to Wolski being called against the Caps.

In the end, the Caps cannot rely on getting odd goals off the stanchion supporting the glass on the side wall (as John Carlson did this afternoon) for offense, and they can’t be giving up power play goals by the pallet load.  They have to play something resembling real hockey.  And they have had a difficult time doing just that.  Today was merely a microcosm of their season, a few good stretches and too many and too long poor ones.  Just like the season so far in which the Caps have failed to put together consecutive wins.

Nine games in, the Caps are not a playoff team.  If 54 points is the threshold for making the playoffs this season (the 48-game equivalent of what last season’s threshold was in teh Eastern Conference), the Caps need 49 points in 39 games to get there.  That is a 103-point pace over 82 games.  Does this team look like a 103-point team?

In eight and a half years the Caps have gone from having the first overall draft pick, to the growing pains of a young team, to restored competitiveness, to being in the conversation of who are legitimate contenders for a Stanley Cup, to struggling to making the playoffs, to the look of a lottery team that could get the number one overall pick.

The Caps look at the moment to be headed back to where they started.

Posted by The Peerless at 10:44 PM No comments:

The Peerless Prognosticator is ON THE AIR!!! -- Game 9: Penguins at Capitals, February 3rd

Well guys, it’s Super Bowl Sunday, and you know what that means…

“What does hockey have to do with football?”

Well, not much, except the Caps have a bit of a tradition of playing on Super Bowl Sunday.

“Will there be commercials?”

Probably, Cheerless, but not the…

“Like that Darth Vader one a couple of years ago?…that was funny.”

“Or like that one with the frogs?  Beer and frogs…now that’s entertainment.”

I don’t think so…

“Well, maybe at least we’ll have some decent snacks for the game.”

Just so it's not beer and fr... What in heaven’s name is THAT?  It looks like…jerky, but that’s not beef.

No argument there, Fearless, but let’s get to it.  Here is how the Caps and Pens compare in their numbers to date… 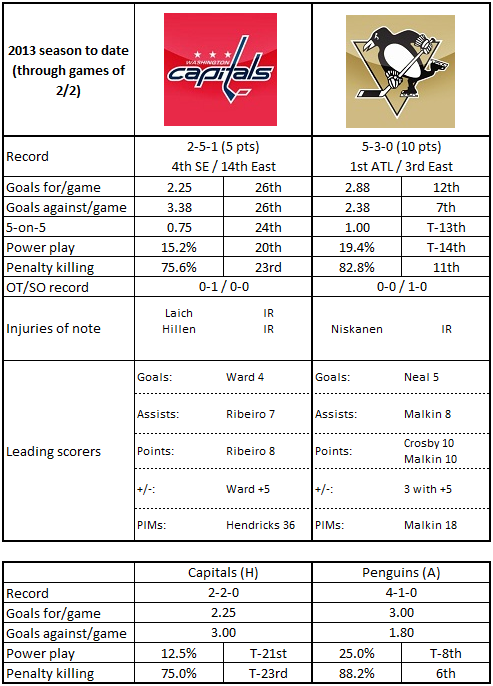 1.  Despite their 5-3-0 record, the Penguins are struggling with consistency.  Two wins followed by two losses, a win, and a loss.  But they do have wins in their last two decisions, beating the Rangers and Devils by a combined 8-1 margin.

2.  Pittsburgh has mastered the fast start.  The Penguins have scored the first goal in five of their eight games played so far, and they have outscored their opponents by a 10-2 margin in the first period of those games.  The second period?  A different story… they have been outscored by a 12-4 margin.

3.  Close games have not been a part of the Penguin season to date.  Only Florida has more games ending in three-or-more goal decisions than the five recorded by Pittsburgh through eight games (a 2-3 record).

4.  Part of the Penguins game is playing in the other team’s end most of the time.  One reflection of this is their shots on goal.  In seven of eight games they have outshot their opponents, posting a 4-3-0 record in those games.

5.  Matt Cooke leading a team in minor penalties?  Not news.  Evegeni Malkin leading the team?  Not what one would expect.  But there is Malkin, tied with Cooke for the team lead in minor penalties and sitting all by himself atop the team’s penalty minute list.

1.  The Caps have scored first in three of their eight games.  What they haven’t done is get their top guys off fast. The first goal scorers are Joel Ward, Matt Hendricks, and Troy Brouwer.

2.  Speaking of Brouwer, he does not have a point in seven career games against the Penguins, but he does lead the Caps in home goals so far (ok, it’s only two).

3.  Eric Fehr has more goals against the Penguins (five in 14 career games) than he does against any other team in the league, except Tampa Bay (also five goals, but in 22 games).  Of course, the two memorable ones came outdoors in the 2011 Winter Classic.  He has only two goals in his last 55 regular season games, so perhaps this is an opponent against which he can get well.

4.  Jason Chimera does not have a goal yet this season, but he is charting a course for a career high in assists.  He has five in eight games so far, which might not seem like a lot, but his career high in helpers is only 21, set in the 2006-2007 season with Columbus.

5.  One hopes that one of Mathieu Perreault or Marcus Johansson (or both, for that matter) will grab a regular spot in the lineup by the throat.  At the moment, neither is looking to do so.  They have combined for no points and only seven shots on goal in a total combined ice time of 125:26.

Marc-Andre Fleury having earned the win against the New Jersey Devils yesterday, it is reasonable to assume that former Capital Tomas Vokoun will get a chance to face the team for which he tended goal last season.  And his are not your typical backup goaltender numbers.  In four appearances so far this season Vokoun is 2-1-1, 1.81, .940 with one shutout.  And Vokoun has a history against the Caps, most of being the product of his time spent with the Florida Panthers.  He has a modest win-loss record against the Caps (10-12-1), and his goals-against average is not especially impressive (2.48).  But he has played on bad teams that gave up a lot of shots along the way.  His career save percentage against the Caps is .925.  Facing a lot of shots has not been a problem for him with the Penguins so far; he has faced only 100 shots in 199 minutes.

Nicklas Backstrom announced his arrival for the 2013 season in the 3-2 win over the Flyers on Friday night with a goal and an assist.  Now he gets to face a Penguins team against which he has had considerable success.  For example, did you know that he has more assists against Pittsburgh (23 in 18 games) than Sidney Crosby has against the Caps (22 in 22 games)?  And Backstrom is starting to establish a consistency in his offensive game.  He has points in his last three games (1-3-4).  If Troy Brouwer gets his first career goal against the Pens, Backstrom is probably going to be a part of it.

1.  Sunday is Special.  Only two teams have faced more shorthanded situations than the 41 faced by the Caps, and two of those teams (Philadelphia and Dallas) have played in one more game.  On the other hand, only six teams have had fewer shorthanded situations to deal with than the Penguins.  What is more, the Caps have had fewer power play opportunities than their opponent in five of eight games, going 0-5-0 in those games.  The Caps cannot afford to be giving up more power play chances than they get.

3.  Field position isn’t just for football.  The Penguins have not been outshot in any game this season.  After splitting 54 shots with Philadelphia in the season opener the Penguins have outshot each of their last seven opponents.  This is one of the core elements in the way Pittsburgh plays.  The Caps cannot afford to have the ice tilted in their direction.

In the end, this is probably the Capitals’ stiffest test so far this season, at least on paper.  But the Penguins are hardly a team the Caps fear, either.  Washington is 13-2-3 against Pittsburgh in their last 18 regular season meetings dating back to January 2008.  This will be the Penguins’ only visit to Washington this season (unless the teams meet in the playoffs), and it would be nice if the Caps made a statement.  It also would be nice if they grabbed a couple of points to move up a few spots in the standings.  Oh heck, it's just always nice beating Pittsburgh.

Posted by The Peerless at 2:20 AM No comments: