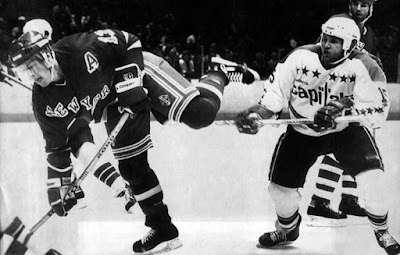 From time to time a fan will wonder, what if things unfolded differently?  For Caps fans it has been a through-line spanning the history of the franchise.  Well, at least until 2018.  Until the Caps won the Stanley Cup in 2018 their history was one long conveyor belt of disappointment, frustration, and despair in the postseason.  But where did it start for the Caps?  We will argue here that it started on April 23, 1986.

Few Caps fans will recall by this time that when the sun came up on April 23, 1986, the Caps had already swept the New York Islanders, 3-0, in a best-of-five opening round series, and they held a 2-1 lead in games over the New York Rangers in the Patrick Division finals, outscoring the Rangers, 14-4 in Games 2 and 3 after dropping Game 1 in overtime.  But there was an ominous aspect to the 6-3 Game 3 win over the Rangers at Madison Square Garden, one that might have been a warning of what was to come.

In that Game 3 at Madison Square Garden, the Caps jumped out to a 2-0 lead in the first period on goals by Bobby Carpenter and Mike Gartner.  Barely four minutes into the second period, the Caps were up 4-0, courtesy of Carpenter’s second goal of the game and a strike by John Barrett.  But in the third period, the Caps got sloppy, taking six penalties, including a major penalty to Alan Haworth for slashing, and the Rangers posted a pair of power play goals.  The Caps answered each of them with goals of their own, Barrett getting his second of the game and Haworth potting one before the Rangers closed the scoring on a Pierre Larouche goal with just over two minutes left in the game.  The Caps skated off with a 6-3 win, taking a 2-1 lead in games and technically not trailing for so much as a single second of the series, their loss coming on an overtime goal by the Rangers in Game 1.

But back to that ominous part of Game 3.  Caps goalie Pete Peeters said that during the game he was struck by a quarter thrown from the stands.  The Caps won the game, but was that an omen?  An unlucky coin?

OK, we might be stretching things a bit, but when the teams took the ice for Game 4 on that fateful night of April 23, 1986, it was the Rangers scoring first – a power play goal by Wilf Paiement in the seventh minute of the game – to take their first lead in regulation time in the series.  When the Caps answered with three goals in a span of six minutes before the end of the first period, Paiement’s goal might have looked like a speed bump for the Caps on their way to a dominating Game 4 win and a 3-1 series lead.

But then, things took a turn. Less than five minutes into the second period, rookie Mike Ridley scored for the Rangers to cut the Caps’ lead to one.  Less than four minutes later, Tomas Sandstrom scored his first goal of the series to tie the game at 3-3.  Bobby Gould restored a measure of order for the Caps, scoring with 1:01 left in the second period to put the Caps back on top.

When Greg Smith scored a shorthanded goal for Washington 7:45 into the third period, it looked as if the Caps had dodged a bullet – or a quarter.  However, Willie Huber scored on the power play just 24 seconds after Smith’s goal, and it was then a case of the Caps trying to preserve a one goal lead on enemy ice over the last dozen minutes of the game.

They didn’t.  Bob Brooke scored with 2:35 left in regulation to tie the game.  The player earning the primary assist?  Brian MacLellan.  The Brian MacLellan who scored the overtime winner for the Rangers in Game 1.  Yes…that Brian MacLellan.

And so, the teams went to overtime.  There, just 2:40 into the extra frame, Brooke scored his second of the game in what must have seemed at the time a fluke, but what would become over the years to come something very “Caps.”  Taking advantage of a Caps turnover, he shot the puck off the skate of Greg Smith and between Peeters’ pads, and the Rangers had their second overtime win of the series, 6-5.

So there we were, the Caps and Rangers tied at two games apiece despite the Rangers holding a lead in the series for just 28 seconds in regulation.  New York had two wins secured in overtime after overcoming two-goal deficits in each game, twice in Game 4.

Things went south for the Caps after that.  They went out to another two-goal lead less than four minutes into the contest on home ice in Game 5, but the Rangers roared back with four unanswered goals to win, 4-2 (MacLellan had the primary assist on the game-winning goal in this game, too), and force an elimination game for the Caps in New York in Game 6.  The Blueshirts got out to a two-goal lead of their own in Game 6 at Madison Square Garden, but the Caps could do no better than halve that lead, dropping a 2-1 decision and the series to the Rangers.

For the Caps, who finished with 50 wins for the first time in franchise history and 29 standings points ahead of the Rangers in the regular season, and who outscored the Rangers, 14-4 in Games 2 and 3 after losing in overtime in Game 1, it was a bitter pill to swallow, ending a season that might have been their best chance at a Stanley Cup until the Alex Ovechkin years.

It makes one wonder…what if that puck off the stick of Bob Brooke had not hit that skate on Greg Smith’s foot and found the back of the net in overtime of Game 4 on April 23, 1986?  Would the Caps have avoided years of disappointment and despair, of flukes and failures?  Or was it just the begining of a long arc of history in which a little known forward playing in his first and only year with the New York Rangers who figured so prominently in the Rangers’ decisive goals of the series would someday lead the Caps from the front office to their first Stanley Cup win?