We have the four big players awards up on the board. What about the others?

“The Ted Lindsay Award is presented annually to the "most outstanding player" in the NHL as voted by fellow members of the National Hockey League Players' Association.”

“Outstanding” and “valuable” are not synonyms. Neither is this a “best player in the game” award. It is an award for that player who had the most outstanding season in the NHL. So that eliminates the Olympics, too. And by that measure, consider this: 57-66-123, +51, 15 power play goals, seven game-winning goals, 211 hits, 75 takeaways. Those are Alex Ovechkin’s numbers for this season at an 82-game pace. You cannot discount the fact that he did miss those ten games, in part due to two suspensions. But then there is this: 30-4-7. His team’s record after his having been named captain. The 82-game pace for that is pretty simple arithmetic: 60-8-14. Sidney Crosby had a memorable year as a hockey player, Henrik Sedin announced himself as having joined the elite in the game. But Alex Ovechkin was the NHL’s outstanding player.

“The Frank J. Selke Trophy is an annual award given to the forward who best excels in the defensive aspects of the game. The winner is selected in a poll of the Professional Hockey Writers' Association at the end of the regular season.”

On a team that is more known for its offense and that has more renowned centers, Jordan Staal has carved out a niche for himself as a talented two-way center. He also plays on a team that has an underrated penalty kill, and Staal logged more average shorthanded ice time than all NHL forwards except Jay McClement and Todd Marchant. Datsyuk remains one of the elite two-way centers in the game, but this year did not seem to measure up to his standard on either side of the ice. Kesler had a fine season and would seem to be now a perennial contender for this award. But overall, the winner here for this season should be Jordan Staal.

This race is perhaps the easiest to handicap. If this was the equivalent of the Irving G. Thalberg Award for a film producer’s body of work, Barry Trotz wins in a walk. If it was awarded based on the season’s first half, Joe Sacco is your winner. But for working around all the controversy and distraction swirling about the Phoenix Coyotes, for all the disrespect he endured concerning the Coyote’s chances to make the playoffs, for shepherding a roster that lacked the high-end talent of the competition in the Western Conference; to still finish fourth in the conference with more than 100 points, Dave Tippett is the clear choice to win the Adams Award this season.

Thank you, and drive safely.
Posted by The Peerless at 6:43 AM No comments:

The citation for the Vezina Trophy states…

"The Hart Memorial Trophy is an annual award given to the player judged to be the most valuable to his team. The winner is selected in a poll of the Professional Hockey Writers' Association in all NHL cities at the end of the regular season." 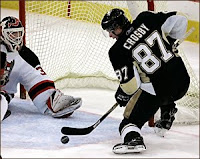 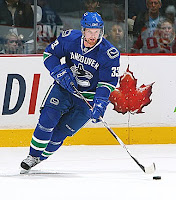 The Case for Sidney Crosby

Sidney Crosby just keeps adding to the resume. Fourth year in five in which he finished with at least 100 points (his 109 points tied for second in the league), tied for the league lead in goals, eighth in assists, tied for sixth in power play goals, eighth in power play points, tied for tenth in game-winning goals, 11th in faceoff winning percentage. Against the other seven teams in the Eastern Conference making the playoffs, Crsoby finished 17-22-39, plus-2 in 32 games. After enduring a five-game streak early in the season in which he did not record a point (and went minus-6), he did not go more than two consecutive games without a point for the rest of the season, and he did that only three times. Perhaps more important than his own numbers is the fact that Crosby assumed more of a responsibility for finishing on offense than he had in his previous seasons. Pittsburgh’s weakness on the wing is no secret. In fact, no Penguin winger finished with more than 45 points, and only one finished with as many as 20 goals. As if he did not already have a bulls-eye on his back, he drew more attention by virtue of teams’ ability to lay off the wingers and focus their attention even more on Crosby. Add to this the fact that Crosby took other, comparatively weak parts of his game (goal scoring, up 42 percent over his previous career high; and faceoffs, where he led the league in draws taken and finished ninth in winning percentage) and made them not only strengths, but a weapons, and you have a Hart Trophy finalist.


The Case for Alex Ovechkin

No other argument can begin until this number is tossed out – ten. None of the top-ten scorers missed more than six games. None of the top 20 goal scorers missed as many games. Ovechkin still managed to finish tied for second in total points, third in goals, sixth in assists (Crosby – the playmaker – finished one spot behind Ovechkin), second in plus/minus, tied for sixth in power play goals, sixth in total power play points, and tied for fourth in game-winning goals. Among forwards, he finished 19th in hits and tenth in takeaways. Against the other seven teams in the top-eight in the Eastern Conference, Ovechkin finished 20-22-42 and a whopping plus-31 in 25 games. For those thinking he padded his numbers in the weak Southeast, think again. Then there is that whole matter of the remarkable consistency he has displayed over his still young career. Only twice this season did Ovechkin go consecutive games without registering a point, and never more than two in a row. To this add the object of the exercise – to win games. After being elevated to captain, the Caps finished the regular season 30-4-7.


The Case for Henrik Sedin

If ever there is or would be a victim of “east-coast bias,” it might be Henrik Sedin. Did anyone stay up to watch him average more than an assist a game? Or score 112 points overall? Sedin led the league in both categories. He also finished fifth in plus/minus, and was one of only three players in the league to average more than an even-strength point a game (minimum 40 games). But this being a “most valuable” player award, Sedin’s value was never greater than when his brother Daniel went down to a broken foot early in the season and missed 18 games. Henrik picked up the slack, scoring 18 points in the 18 games, but it was as much the manner in which he did it. Primarily known as a set-up man at center, he recorded ten goals in those 18 games and allowed the Canucks to do better than tread water in Daniel’s absence, going 11-7-0 over that span. Then there was the whole road trip from Hell thing as Vancouver was being readied for the Olympic games. In the 13-game road trip that straddled the Olympic break, Sedin was 2-10-12, plus-7 as the Canucks escaped with an 8-5-0 record. Sedin showed his mettle in some difficult situations this season, demonstrating that he was more than just another European with a deft passing touch.

In the end, it would seem that this award is going to be decided in the midst of a subtext that should have no bearing on the outcome – the Olympics. And the narrative lurking under the surface here is that Sidney Crosby succeeded, and Alex Ovechkin failed. Also swirling around in this mix is the notion that Ovechkin displayed a much darker side to his game this season, earning two suspensions for physical fouls on opponents. We would like to point out that Crosby is no shrinking violet in this regard, either. Of the 33 minor fouls Crosby was whistled for (tenth in the league among forwards, compared to the 22 that left Ovechkin 66th in the league), 19 were for physical fouls (slashing, roughing, cross-checking, and high-sticking), and 11 of those were for slashing. It always seems to come down to Ovechkin and Crosby. Pity, because the most valuable player to his team this year was…


Henrik Sedin
Posted by The Peerless at 4:03 AM No comments: